John Feinstein's A Good Walk Spoiled was a double-threat treat that not only provided golf fans a rare glimpse behind both the lives of its stars and the scenes of the Ryder Cup but also coaxed the golf-averse into chancing a closer look at the sport. He succeeded by plumbing the minds of the golfers themselves as his starting point, humanizing a sport that, to the casual observer, consisted of little more than boring androids pursuing gobs of money in a boring game.

In this new book, Feinstein pulls off the same feat using the same technique.

The four annual golf tournaments considered "the majors" are roughly akin to the grand slam of tennis, except that no golfer in history has ever won all of them in a single year. In fact, only four golfers in history have ever won all of them in different years. No matter how many other tournaments a player wins, and no matter how high up on the money list he is or how often he's been there, no touring pro can claim a fulfilled career unless he's won at least one major. And some of the best in the game never have, including Dave Duval and Phil Mickelson.

Each of the majors carry with it unique pressures, challenges and difficulties. The British Open is played under the most horrendous environmental conditions on the tour, including fierce winds, torrential downpours and course surfaces that look as if they were maintained with no piece of equipment more delicate than a bulldozer. The U.S. Open traditionally gives the impression that the course was laid out by a committee of criminally insane golf-haters whose compensation was directly correlated to the size of the scores they could force the leaders to post.

The stories behind the quests of golf's top echelon players to add a major win to their career histories are by turns exhilarating, heartbreaking and maddening, but in Feinstein's capable hands they are endlessly fascinating. The ability to convincingly peel away the stoic game faces that appear on television is the author's unique gift, and you don't have to know or care a thing about golf to fully appreciate it. If you enjoy an insightful peek into the rarefied stratosphere of a field of endeavor with which you're not necessarily familiar, get your hands on this book. Golf fan or not, you won't regret it, and you may even find yourself tuning into a golf tournament or two with a whole new attitude. 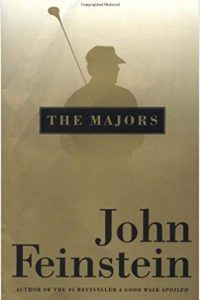