I think — make that hope — that there's a trend brewing here.

Last year I reviewed an extraordinary book by Dava Sobell called Longitude (a new illustrated version is now available – click here). Suspenseful and thrilling, it was the true story of the struggle to provide a means by which ships at sea could determine their longitude, a deceptively complex task that baffled scientists for centuries. Failure to solve the riddle had real-world consequences: thousands of lives and fortunes were lost as ships, unable to accurately determine their positions, missed their destinations only to founder on rocky shoals or be lost at sea.

Sobell's achievement was to take a hopelessly dry subject and imbue it with all the excitement and intrigue of a top-notch mystery novel. It was a bestseller (and one of the top sellers among books ordered through LeeGruenfeld.com last year) and thousands of readers, who would no more have picked up a technical treatise on navigation than read a phone book, found themselves suddenly fascinated by such diverse fields as horology, astronomy and mathematics.

Now comes Fermat's Enigma, by BBC journalist Simon Singh, in a physical format suspiciously similar to that of Longitude. In fact, most everything else about the book is similar as well: it takes a subject that most people wouldn't dream about spending two seconds on and presents it so compellingly that it reads more like Ludlum than Hawking. Populated with extraordinary characters and punctuated by love stories, suicides, piques of destructive jealousy and flashes of the sheerest genius, Fermat's Enigma can rightfully take its place among the pantheon of wonderful books that have rendered the esoteric accessible to we ordinary mortals.

All of that, and I haven't even told you the subject yet. There's a reason: if I had mentioned earlier that the subject was a mathematical puzzle, you might not have made it this far, even if I told you that Captain Picard had described the problem to Commander Riker on an episode of Star Trek: The Next Generation. Now, I hope you're hooked enough to read on.

The puzzle is a deceptively simple one. Perhaps you remember the Pythagorean Theorem from high school math: The square of the hypotenuse of a right triangle is equal to the sum of the squares of the other two sides, which can be written as:

I purposely picked some easy numbers for the example triangle. All the sides are integers (also called whole numbers, or counting numbers), so we wouldn't have to get into messy decimal or fractions. There are a lot of right triangles with integer sides like this, such as 5/12/13 (52 + 122 = 132). In fact, there are an infinite number, which means that there are an infinite number of solutions to the equation x2 + y2 = c2.

Now have a look at a similar equation:

Looks a lot like the Pythagorean, except that everything is raised to the third, rather than second, power. Can you think of any integer values of x, y and c that could be substituted into this equation that would make both sides equal? How about for the equation x4 + y4 = c4, or x5 + y5 = c5?

Bet you couldn't. Bet nobody could. A man named Fermat put forth the proposition that an equation of the form:

…has no whole number solutions if n is greater than 2. In other words, for n greater than 3, there is no combination of x, y and z that will make the equation work if x, y and z are all integers.

Sounds like a big so what, doesn't it? Except that Fermat made this assertion in 1637 and, following its publication in 1670, the best mathematical minds spent the succeeding 323 years trying to prove that it's true in all cases. All of them failed. They could show that there were no solutions if n=3, and therefore no solutions for n=6, or 9 or any other multiple of 3. Same was true for n=4, or 8 or 12 or any other multiples of 4, and so on.

You might think it a relatively simple task to prove this for enough numbers such that all the others would be covered, all of them being multiples of the "root set," but that won't do it. For one thing, there is a certain type of number called a prime, which isn't a multiple of anything. 29 is an example. So are 79 and 129. We can't prove Fermat's conjecture for values of n that are prime by resorting to other numbers that have been proven before, because primes aren't multiples of any other whole numbers.

Okay, no problem. We'll just prove it for each individual prime value of n and get those out of the way.

Except that there are an infinite number of primes, so that won't work.

No proof based on a finite number of specific values of n will work. What is needed is a general proof that works for all values of n that are whole numbers. And for 323 years no such proof was ever found. Mathematicians drove themselves batty trying to do it. Enormous cash prizes were offered, not to mention the promise of immortality, and still they all failed. It was a mathematical disgrace.

To make matters worse, Fermat had written in the margin of his notebook that he had a "truly marvelous" proof of the theorem. But the reclusive, amateur mathematician had labored in obscurity, rarely bothering to fully explain his conjectures, and it wasn't until after his death that his son published his work. Nobody had the chance to ask him about his marginal graffito, and it has tantalized mathematicians ever since. It was called Fermat's Last Theorem not because it was the last one he wrote (it wasn't) but because it was the last of his theorems still not proven.

Over three centuries, literally thousands of proofs had been announced, and all were found to be fatally flawed. But while nobody had been able to prove that xn + yn = cn had no whole number solutions for n greater than 2, a lot of remarkable mathematics got developed as a result of all the attempts, and a good deal of progress was made in coming to understand the true nature of the recalcitrant puzzle which was universally recognized as the greatest mystery in all of mathematics. Many respected mathematicians opined that it would never be proven one way or the other, and in fact that made it a useful reference tool: any time someone came up with a proposition that also seemed to imply a proof of Fermat's Last Theorem, mathematicians assumed the proposition must be flawed. Invariably, it was.

In 1955, two Japanese mathematicians demonstrated a remarkable correlation between two types of equations, known as ellipticals and modular forms, that no one up until then had suspected were in any way related at all. The Taniyama-Shimura conjecture became one of the hottest topics in mathematical circles, but it was a "conjecture" rather than a theorem because no one had been able to prove it. A lot of wonderful math precipitated out of study of the conjecture, though, and in 1984, a mathematician named Frey proposed that, should the conjecture ever be proven, a solution to Fermat's Last Theorem would automatically result. Two years later, Princeton professor Ken Ribet proved the link and now there was no longer any doubt: prove the Taniyama-Shimura conjecture and you proved Fermat's Last Theorem.

But mathematicians had been trying for thirty years to prove Taniyama-Shimura. Now that Ribet had linked it to Fermat, dismay set in: by this time, most mathematicians believed that anything that would lead to a solution of Fermat was doomed to failure. Like exceeding the speed of light, they thought it was inherently impossible (although nobody could prove that it was impossible…and so forth).

Enter one Andrew Wiles, a Cambridge-educated mathematics professor at Princeton. Intrigued with Fermat's enigma since the age of 10, Wiles became obsessed with it as an adult. The trigger was Ken Ribet's 1986 proof that solving the Tamiyama-Shimura conjecture would lead directly to a proof of Fermat's Last Theorem. Wiles was an expert in elliptical equations, and armed with a tool he could master, he thought he finally had a reasonable chance at realizing his life's goal.

Contrary to the collegial conventions of his profession, Wiles went into near-total seclusion for seven years in order to devote full-time to his obsession. During that time he developed an amazing amount of brilliant, novel math that would have ensured his place among the greats of the day, but rather than hint at his progress and risk someone else leapfrogging his work to the grand prize, he dribbled out enough bits and pieces of a previously unpublished work to satisfy his department heads and keep everyone off the scent.

His 1993 announcement that he had solved the greatest mystery in the history of mathematics made the front page of the New York Times and shook the math world to its foundations. By the time you finish this short book, you should have a good appreciation of why. It's not just the obvious, that Andrew Wiles had done what no one else in history had managed to do, but that along the way he had revolutionized the study of mathematics, doing for that field what Einstein had done for physics or Crick and Watson for biology. As an example, by completely unifying two seemingly disparate subspecies of mathematical study, he had taken a critical step down the road toward the "grand unification" of all of mathematics, long the dream of Robert Langlands, who shared the 1996 Wolf Prize with Wiles. (The Wolfskehl Prize, which had been established in 1908 to go to the first person to prove Fermat's Last Theorem, went to Wiles alone in 1997.)

As you read, you'll be treated to wonderful stories dating from 500 B.C., when Pythagoras established the first school of mathematics, a brotherhood so secret its members were executed if they leaked news of the advances being made within. You'll meet Evariste Galois, a genius of such high order he left his mark on mathematics despite dying in a duel at the age of 20. There is Sophie Germain, a woman who had to disguise herself as a man in order to practice math in the early 1800s and who showed Fermat's Last Theorem to be true for a special class of prime numbers now known as "Germain Primes."

The math in the book is accessible to anyone with an understanding of basic algebra. If you could follow the foregoing description of Fermat's Last Theorem, you'll have no problem at all, and should be intrigued by the appendices that present some easy-to-follow examples of fundamental concepts. Singh has wisely traded off a deeper understanding of the solution, which is understood by very few people on earth as it is (Wiles' proof runs to 200 dense pages that took six top mathematicians months to verify), in order to give a wider number of general readers a sense of the excitement that surrounded the historic achievement.

(Personally, I don’t believe that Fermat really had a "truly marvelous" proof of his theorem. The math necessary for it didn't exist until the twentieth century and even then, Wiles had to invent whole new slabs of it. Some mathematicians cling to the belief that Fermat did have some cunning approach not considered since, and are looking to duplicate it.)

I can't recommend this book highly enough, and hope it truly is indicative of a trend toward making esoteric topics in a variety of fields accessible to anyone willing to give it a go. By the way, it would make a splendid and inspiring gift for those teenagers not too MTV'd out to have lost their sense of curiosity and wonder. Just tell them Fermat's Enigma is a true-to-life version of Good Will Hunting — I promise they won't cry foul when they finish the book. 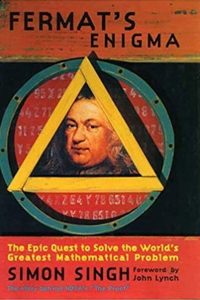