Dutch: A Memoir of Ronald Reagan

Reading Dutch, I couldn't help but be struck by a feeling I haven't had since the much-maligned The Bell Curve inflicted itself upon the charts: a depressingly large number of its most vocal critics probably never read the book. Instead, they based their slings and arrows on what they thought it was about from listening to talk show interviews and reading the remarks of more responsible critics.

Aside from the vaunting dishonesty of this utterly reprehensible tactic, it does the reading public a terrible disservice because it reflects and magnifies the negativity of those with a particular ax to grind, inadvertently pushing hidden agendas and foisting misleading impressions upon people unaware of the fraud being perpetrated upon them.

A strong accusation, I know, but easily supported by examining the two most popular criticisms of Dutch. The first is Edmund Morris's technique of creating fictional characters through whose eyes some of the story of Ronald Reagan's life is told. This literary device has been widely decried but, interestingly, rarely by anyone who otherwise praised the book.

To my mind, such invention is not only harmless with respect to the integrity of the work, but is arguably a stroke of the purest genius that ought to be a source of extreme jealousy for other biographers. Faced with the daunting task of trying to convey something of the essence of one of the most frustratingly inscrutable figures of the twentieth century, Morris was unwilling to lapse into the standard, dry litany of dates and events or erudite analyses of political themes in historical context that are the stuff of so much biography. Rather, he hit upon the idea of spawning his own alter ego in order to provide a breathing mirror from which to reflect the man himself, affording us an eerily evocative feel for a human being who might otherwise have remained unattainably enigmatic. It is hard to believe that anyone who actually read the book could have a serious problem with such a technique, especially since the fictional components are blindingly obvious throughout the book and succeed so well in their intent.

But, admittedly, that's a highly subjective take and the opposing opinions certainly lay claim to legitimacy.

What is more telling, however, is the second basic criticism, which is that Dutch is drenched in unalloyed adoration of its subject. Here is where I find it impossible to believe that those who hold to this position really read the book because the entire volume in fact paints a picture of Ronald Reagan in terms that can only be described as sarcastic, contemptuous and scathing. The only times Morris has provided his opinion that Reagan was one of the greatest presidents was during television and radio interviews, and those comments frankly sounded more like afterthoughts, perhaps (and I'm speculating wildly here) as a result of his post-publication realization that the picture he painted of the man was overly cynical.

Dutch is a Nobel-caliber work that succeeds, as no other biography I can think of, in bringing us to understand a man who, by his very nature, is intrinsically un-understandable. That Reagan was walled-off and severely intellectually challenged is not news, but what Morris's penetrating insight shows us, frighteningly, is that this president was in many ways walled off from reality as well, creating fictions about the world so compellingly that he not only believed them himself, but managed to get those around him to buy in as well. So strong was his conviction that, in a small way, even his biographer was not immune. Reagan stated on many occasions that he was present at the liberation of several Nazi concentration camps, and while Morris makes it plain that the president never left the military motion picture unit in Hollywood to which he was assigned, he does allow as how, in some strange way, Reagan could claim that he "was there" because he was privy to some of the first film footage to arrive back in the states. But no amount of rationalization of what he might have meant can alter the facts, and the book is rife with other examples of Reagan sticking to his mistaken and delusional guns even in the face of incontrovertible evidence to the contrary.

The most remarkable legacy of the Reagan presidency is how this man of "encyclopedic ignorance" managed to stumble and bull his way to a remarkable legacy. To say that he was lucky in many regards is not a laughable contention. One of the ways in which that might have been the case is that his principle opponent on the global scene, Mikhail Gorbachev, seems to have been a more reasonable man that Reagan. While Morris does a good job of conveying the human element of the negotiations that took place between these two world leaders, he doesn't really capture the true implications of Reagan's obstinate stand on SDI, the "Star Wars" defense, which brought us closer to the brink of nuclear war than any other event since the Cuban missile crisis of 1962. This is not clear in Dutch, but another aspect is: while many have made the case that Reagan's stubbornness led to the eventual collapse of the evil empire, there is also a case to be made that it was only because Gorbachev truly believed that the U.S. president would risk nuclear confrontation rather than give up SDI, and Gorbachev himself wouldn't risk it to force the abandonment of SDI. As an American citizen, I find it hard to credit Reagan with the dismantling of the Soviet Union knowing it was based on a strategic position that can only be described as insane, regardless of whether it worked: would we be so sanguine about this geopolitical brinkmanship had it in fact led us to nuclear war?

On this topic, it was disappointing that Morris declined to fill us in on how easy it was for a charismatic and ambitious scientist like Edward Teller to lead the gullible and simple Reagan into the disaster that was SDI. Not only did many of Teller's own colleagues insist that the anti-missile defense system was a technological pipe dream, it was also a blatantly extreme provocation to the Soviets, who reacted with righteous indignation when they discovered its true nature. Despite attempts by SDI backers to obscure that nature, the fact is that the power source for the missile-destroying lasers, euphemistically referred to during Congressional hearings as an "event," was to be a series of hydrogen bombs exploded in space. Faced with the prospect of a gaggle of American thermonuclear devices orbiting overhead, did the Russians react any differently than the U.S. would have under similar circumstances? Reagan's "victory" was based on a strategy closely akin to holding a gun to someone's head, and had Gorbachev been equally stubborn, Reagan would have gone into history — or what would pass for history in a post-apocalyptic world — as a simple-minded dolt who was the proximate cause of nuclear Armageddon.

I could list other intriguing aspects of the Reagan presidency that were not dealt with in this book — the air controllers' strike and Reagan's subsequent firing of the lot of them come immediately to mind — but I sympathize with the need to make difficult decisions in service of a volume that, as a high priority, needs to be accessible, and in that Dutch is a complete success. As compellingly readable as a Clancy novel, the book is by turns funny, suspenseful and, above all, extremely literate. Morris is a stunningly gifted writer, his prose so elegant as to recall earlier eras when style was more about enhancing communication and enjoyment than serving as a vehicle for the author's self-indulgence. To be sure, there are some stylistic flaws, such as a wearying repetition of the words "truculent" and "querulous" (even both in one sentence at one point), one-time use of such obscurities as "recrudescent" and "uxoriousness," and a dissonant overuse, mostly at the beginning of the book, of foreign words and phrases likely incomprehensible to all but a few extremely learned readers. His fictional alter ego is inconsistently presented, disappearing for long stretches and being replaced by the real Morris without warning, like an actor in an ethnic role who intermittently loses his accent and lapses back into his native speech patterns. Reference to "my research cards" during a portion set in 1949 seems out of character: why would a childhood friend be keeping research cards for a biography not to be undertaken until three decades later?

Occasionally, Morris's drawing of parallels between seemingly disparate elements — the Liberty Weekend fireworks display reminiscent of Chernobyl, for example — show signs of straining, but are forgivable in light of the ones that work beautifully. The central thesis, that many of the most chilling aspects of Reagan's persona can be explained in terms of the conceit that he viewed himself as an actor and the rest of world as an audience, is an extraordinary insight whose power becomes increasingly clear as supporting anecdotes continue to pile up.

But these are minor carps and quibbles, and ought not to obscure the fact that Dutch: A Memoir of Ronald Reagan, is a masterpiece that is one of the best books of any type I've read in a long time. I can't recommend it too strongly. 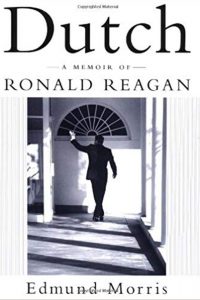