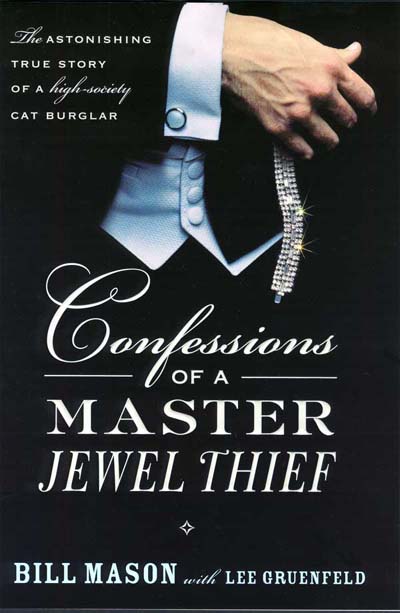 Confessions of a Master Jewel Thief

The extraordinarily captivating memoir of the remarkable jewel thief who robbed the rich and the famous while maintaining an outwardly conventional life—an astonishing and completely true story, the like of which has never before been told . . . or lived.

Bill Mason is arguably the greatest jewel thief who ever lived. During a thirty-year career he charmed his way into the inner circles of high society and stole more than $35 million worth of fabulous jewels from such celebrities as Robert Goulet, Armand Hammer, Phyllis Diller, Bob Hope, Truman Capote, Margaux Hemingway and Johnny Weissmuller—he even hit the Mafia. Along the way he seduced a high-profile Midwest socialite into leaving her prominent industrialist husband, nearly died after being shot during a robbery, tricked both Christie’s and Sotheby’s into fencing stolen goods for him and was a fugitive for five years and the object of a nationwide manhunt. Yet despite the best efforts of law enforcement authorities from several states as well as the federal government, he spent less than three years total in prison.

Shadowy, elusive and intensely private, Mason has been the subject of many magazine and newspaper features, but no journalist has ever come close to knowing the facts. Now, in his own words and with no holds barred, he reveals everything, and the real story is far more incredible than any of the reporters, detectives or FBI agents who pursued Mason ever imagined. Confessions of a Master Jewel Thief, expertly co-written by bestselling author Lee Gruenfeld, is a unique true-crime confessional.

“I think this book's tremendous. As is always the case, real life, when properly described, is vastly more fascinating than fiction, and you need look no further for proof than Bill Mason's amazing story."

— Frank Abagnale, Catch Me If You Can

"Confessions of a Master Jewel Thief is the kind of book that drives crime-fiction writers like me up a wall: No one would ever believe these amazing, compelling stories of theft and deception if they weren't sitting on the nonfiction rack. Mason tells his life story with such flair and confidence that I felt like I was dangling from a twenty-story ledge right along with him. Confessions of a Master Jewel Thief is the ultimate kind of guilty pleasure, because even though you know it's so wrong, it feels so right."

CONFESSIONS OF A MASTER JEWEL THIEF is a compelling memoir that details a life of crime and a series of gutty capers rivaling anything that Hollywood could dream up, exploits made all the more astonishing for having been pulled off single-handedly. Bill Mason, a self-described "ordinary guy" who ended up ripping off everyone from Truman Capote to Phyllis Diller to the Mob, insists he's on the straight and narrow now, but his story sure stole a good night's sleep from me.

Mason details the mechanics of his most exciting jewelry heists. Supplementing his re-creations of the thrill of the heist, Mason also offers abundant info on the feckless underworld life [and] sharp looks at lawyers and the criminal justice system. Engaging, extravagant account of life on the wrong side of the law that leaves readers to decide how much to like the rogue.

Fans of classic caper films…will be fascinated by the true-life adventures of jewel thief Mason…recollected in engrossing detail.

Intrigue. Isn’t that why we go to see the James Bond, 007 films? Throw in a bit of suspense and a dash of danger and voila! Suddenly the plot for the next blockbuster film emerges. Bill Mason’s book, Confessions of a Master Jewel Thief, is nothing like that. It’s much better. Picking it up is one thing; putting it down is another. Confessions is a chocolate torte of thievery and its bitter consequences that you will devour though you know it is bad for you. The book is well organized and conceived. The opening chapter draws you into the middle of one of Mason’s most thrilling heists. But he doesn’t let the subsequent narrative drag, keeping the tension of each burglary as taunt as the rope on which he slinks downward toward his next victim. In other collaborations like this one, sometimes you can sense in the work that storyteller and editor are working at cross-purposes. This causes an imbalance wherein the storyteller’s voice is compromised or the editing is insufficient. (Curbing my instinct to reach for my editorial red pen.) In Confessions, I didn’t sense any of that disharmony between the collaborators, thereby creating a unique balance between the two, which is rarely achieved in a work of non-fiction. So, if you’re in the mood to read a spine-tingling thriller, try Robert Ludlum. But if you’re in the market for the real thing then be a Saint and steal away to your nearest bookstore.

Oh, that some fiction was as entertaining and well written as this!