VOG's The Matter With You

Your eyes are red

Your throat is dry

Your lung's on fire

You don't know why

The sky is brown

The grass is green

And so are you

All your skin burns and you're as sick as a dog

Might as well face it: You're inhaling some VOG…

If you're coming to Kona to do the 2008 Ironman, there's something you should know:

On October 11, known in the Hawaiian culture as "Race Day," Oklahoma plays Texas at 9:00 am and it's Tennessee vs. Georgia at 12:30. I'll get to why this is important in a minute.

If you've been here before, you might have heard about vog but probably didn't pay any attention because it had nothing to do with your race. That could change this year.

First, what is "vog?" Well, let's say you wanted to make life really miserable for a lot of people but you lost your job as a mortgage banker and needed an alternative method of inflicting pain. One of the things you might consider is dropping sulfuric acid over a few hundred square miles from high altitude.

Admittedly, that's not easy to do. A shortcut method would be to launch a few tons of sulfur dioxide into the air and then let nature do the rest. Sulfur dioxide is very nasty stuff. Oxidize it using light and heat and you get this unique form of air pollution called vog, or "volcanic smog." Even better, oxidize it in the presence of water and you get sulfuric acid. So if you're out to maximize misery and there aren't any vice presidential debates left, you want to make sure you send up that sulfur dioxide in a very humid, very sunny environment like, say, a tropical island.

Even better, just let the island do it for you, which is already what's happening here on the Big Island. Kilauea, a volcano that has been erupting continuously since 1983, went into overdrive this past March when a second vent opened and doubled the amount of toxic gas spewing into the atmosphere. Even worse, the new vent is farther inland than the original Puu Oo vent on the seaside slope. Gas from the older vent usually blows out to sea, but the new stuff reaches farms and communities, and it's in more concentrated form when it does.

The result matches our ex-mortgage banker's fantasy of mass annoyance perfectly. Here's a shot of Honolulu during a vog attack:

Doesn't look too bad, except when you consider that Honolulu is 200 miles away from Kilauea. Right here on the Big Island, scientists haven't yet figured out whether crops are withering because of the vog or the acid rain, but the farmers don't seem to care much which one it is, nor do schoolchildren who aren't being allowed outside during recess.

But never mind them; let's get to the important stuff. Let's talk about you! You're here to do Ironman! How does this affect your race? Is there anything you can do?

Good news: There is! Here are your options: 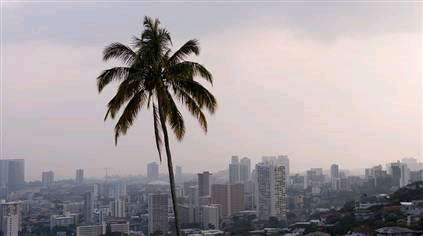 [Editor's note: For those of you who aren't used to Lee Gruenfeld's sick sense of humor and might be tempted to take this article seriously, relax: It's blue skies and clear air all up and down the Kona coast.]