The Stone Walls of Kona

The first time I came to Kona thirteen years ago I was intrigued by all the hand-built lava walls in and around town. Many of them had no visible means of support that I could see, such as iron bars or cement, and seemed to maintain their structure by virtue only of gravity acting on the intricately interlocked pieces. Not only that, but many of the walls had perfectly flat faces and yet the rocks didn't look like they had been cut or otherwise worked.

I thought this was pretty amazing, yet there was no mention of these walls in any of the tourist guides or brochures and, when I asked some locals, they'd just shrug. "It's just a wall, brah…what's the big deal?" So I figured that maybe I was making too big a deal about it. But I really didn't think so. I have trouble even making coral graffiti stay in place so there had to be more to this than some guys picking up pre-fabricated lava walls at Home Depot and dropping them into place.

In the best walls, the stones are used as is, with no cutting. There are two reasons for this. First, purists considering cutting to be cheating. Second, have you ever tried cutting lava? It isn't easy. I'm surprised someone hasn't figured out how to weaponize this stuff.

The advantage of building walls like these is obvious: The material is essentially free, aside from the cost of moving it from where you find it to where you're using it.

The disadvantage is that it's very labor intensive, and the craftsmen who select the stones and then fit them together like a three-dimensional jigsaw puzzle are a very busy bunch, as you can easily see just by checking out any new construction site. An incredible number of major building projects are underway all over the Kona Coast, and every one of them seems to involve huge stone walls.

The best of the stone wall artisans have traditionally been Tongans, although their small numbers in light of all the new construction have created openings being filled by others as well. (Not incidentally, there is a desperate shortage of all kinds of labor on the Big Island. One hotel up the coast currently has 145 unfilled positions and, like a number of other hotels, is importing chambermaids and housekeepers from Jamaica. Unskilled laborers are also pouring in from Mexico to take advantage of the job situation, and there are still not enough.)

From what I can see, there are several distinct types of walls. Some, like the ones I first noticed thirteen years ago, feature perfectly flat faces and have a very finished look to them. These tend to use lighter colored, bluish rock, which comes from the bottom layers of lava flows and is highly compressed, making them less porous and denser. Others have very rough surfaces and consist of much darker, reddish lava. These rocks are very porous and light.

This example of the latter is being built at the new Ted Weiskopf course at the Four Seasons Hualalai resort: 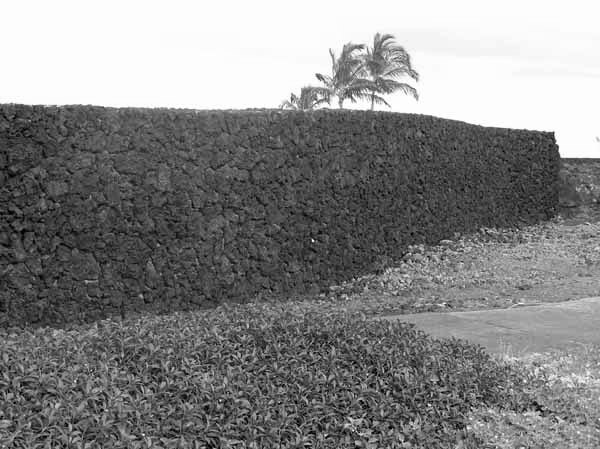 Many walls are no more than three or four feet in height, but some are a good deal higher and occasionally there are some truly massive structures. These use huge, boulder-like blue stones at the bottom to support the weight above, fitted in fairly uninteresting, cinder block-like right angle patterns. It's only when you get above that level that the real artistry takes hold. Here's one example, and I figure this one is kind of a temple, since it's across the street from the Wal-Mart: 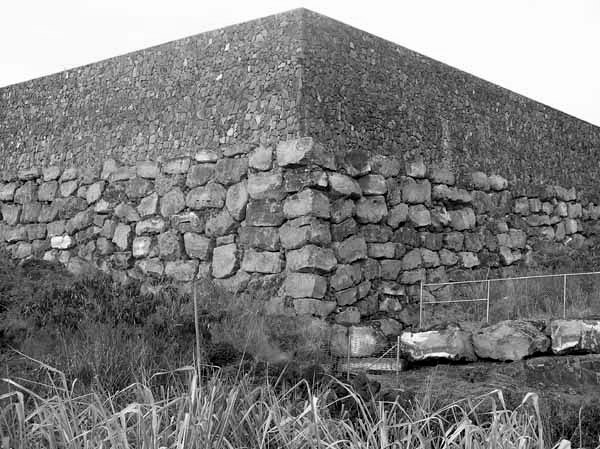 You can get some idea of the scale by noting the standard-height fence at the bottom. If you're wondering what this beautiful wall is protecting, it's an empty lot, but part of it is a remnant of a five-mile long wall built by Big Island Governor Kuakini in the early 19th century to keep livestock from wandering off.

There are several methods used to ensure proper alignment during construction. One is to tightly stretch strings along the length of the wall to delineate the outer dimensions. Another, as shown here, uses wooden forms that are removed once the wall is complete: 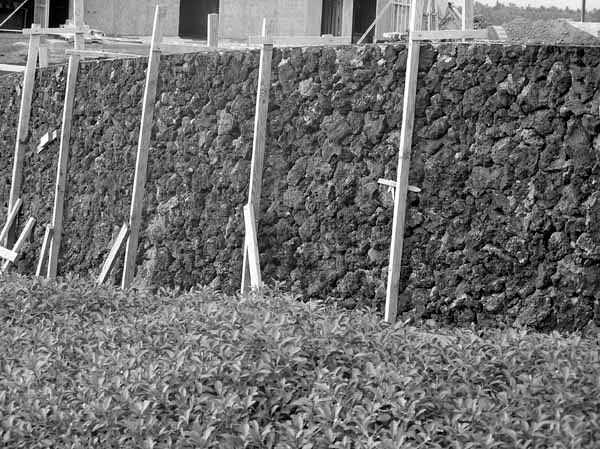 The original Hawaiians were a little less concerned with form than with function, but keep in mind that all of these stones had to be hand carried to the building site. The Pu'ukohala Heiau in Kawaihae (about Mile 34 of the Ironman bike course) was built using a hand-to-hand chain of over 20,000 men to get the stones up from Pololū Valley.

This one crosses a fairway at Makalei: 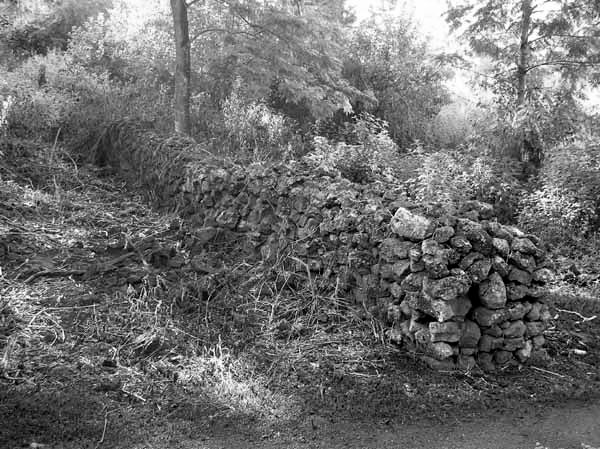 By the way, does it seem to you that a lot of these walls seem to be on golf courses? I find that a fairly remarkable coincidence myself. Go figure.

Some walls are built using a dark colored mortar, but others use a technique called uhau humu pōhaku, or "dry stacking." No cement of any kind, no metal joinery…just layers of raw rock held in place by intricate interlocking. That's the most visible feature of dry stacking, but what's harder to see is that many of the facades are tilted inward, which makes gravity itself act as a strengthener, in much the same way as with an arch. When done properly, you can jump up and down on one of these walls without jarring a single stone.

It's thought that this kind of construction began around 900 years ago by an "engineer of public works" named Chief Pa'ao, and the construction techniques were handed down from generation to generation. Since many of these walls were used as corrals or boundaries for grazing animals, building and repairing stone walls was as important to the early Hawaiian paniolo as building and repairing wooden fences was to cowboys in the American west.

If you come to Kona, take the time to have a look at these remarkable structures. You don't have to do anything to find them – they're everywhere. You just have to notice.