My conversation with Bob "All Around Funky Dude" Babbitt, top kahuna at Competitor Magazine, went like this:

BAAFDB: How about writing a daily blog from Kona for us?

BAAFDB: But you can't write about golf.

BAAFDB: Okay, you can write about golf once.

Hmmm. With only one shot at it, what to write about? Obvious choices would be the over-the-ocean par 3 at Mauna Kea, or the grass at the new Ted Weiskopf course at Hualalai that looks like it was cut with nail clippers and a ruler, or the vistas from the Kona Country Club Mountain course…stuff like that. It's all true, of course: These are some of the most magnificent tracks in the world. Problem is, I don't think there's anything you can possibly say about the best-known island courses that hasn't been said before, and probably a lot better than I could do it.

So I've got a better idea, which is to tell you about the best-kept golf secret in all of Hawai'i. I've been putting this off for years, because why would I want to increase their business and then have to fight for tee times? But there's a code of honor in golf, and while I'm not above using the old "Florsheim toe wedge" to improve my lie, I can  no longer in good conscience keep this to myself.

The course is called Makalei, and it's only seven miles but five million years away from Kailua-Kona. Take an Amazonian rain forest and drop it halfway up the slopes of Hualalai Mountain, carve out a few fairways and greens with virtually no damage to the environment, and you'll still have no idea what this course is about until you actually go up and see it for yourself. This is one course your spouse might actually enjoy riding around with you without having to fake enjoying it, because it's kind of like the Jungle Cruise ride at Disneyland except without that bozo who shoots the hippo. The variety of exotic plants and animals turns a round of golf into a photo safari: hit the ball, take a picture, hit the ball, take a picture…

The first time I played here I thought there were guys hiding in the woods laughing hysterically every time I took a swing. Jim in the Pro Shop told me it was actually a native bird called an "erkel franklin" which has a cry like a six-year old with smoker's cough being tickled to death. The peacocks aren't shy either: This fella nicked a Snickers Bar right out of my golf cart. (I'm sorry…did I say Snickers? I meant Power Bar.) 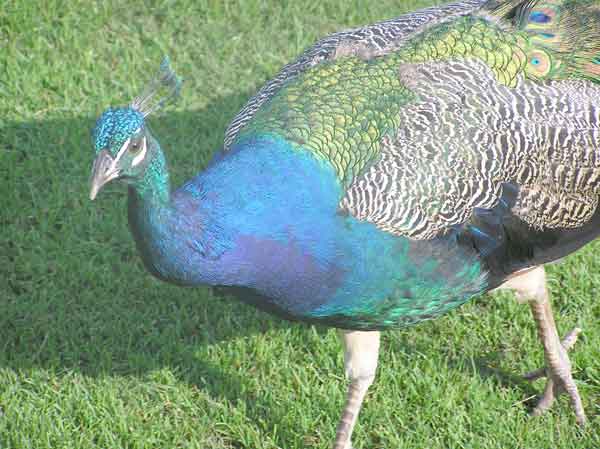 Makalei was carved out of an old ranch situated on an ahupua'a (rhymes with "Are you two mama"), a pie-shaped sliced of land that starts at the top of the volcano and widens out as it goes down to the sea. Remnants of native Hawaiian culture have been carefully preserved, most notably a series of magnificent stone walls. A couple of these run right smack across the fairways and you have no alternative but to hit over them. 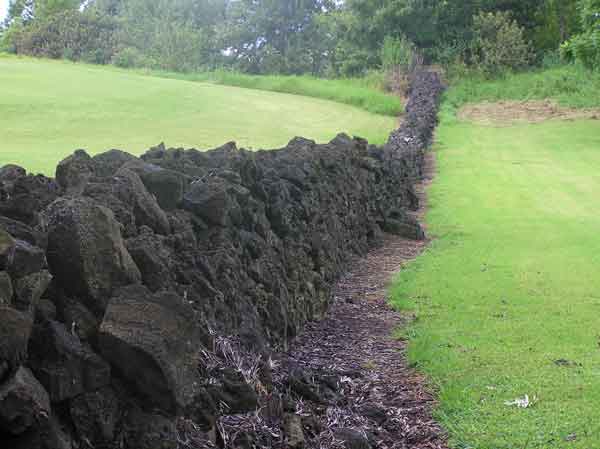 There are lava tubes as well. In the event that Hualalai ever decides to erupt again, you're well advised to play the number eight hole quickly, because one of the lava tubes empties right onto the green: 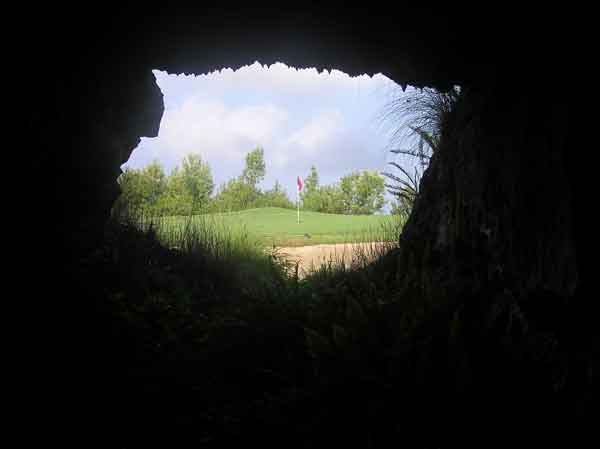 It's not an easy course. Madame Pele the volcano goddess may live on Kilauea but she plays golf at Makalei. However, designer Dick Nugent was careful to make sure everybody has a good time by laying out tee boxes such that the course length can be adjusted by up to an astonishing 2,000 yards depending on your ability. The slope from the back tees is a whopping 143 but the only time I personally saw those was when I was driving past them on my way to the ladies' (sorry: "forward") tees.

I say "driving" because this course isn't walkable unless you're currently peaking for the Eco-Challenge. The elevation difference between the club house and the 10th hole tee box is forty feet more than that between the lobby of the Empire State Building and the 86th floor observation deck. It's one of the only courses in the state that has to use gasoline carts to negotiate the steep hills. It wouldn't be a bad place to shoot the next season of "Survivor." Good pieces of advice are posted around the course, like one that says, "Danger: Steep cliff. Do not play beyond this point."

Makalei was always exotic, but it wasn't always in the best of shape. It was taken over by Big Island Country Club Homes LLC this past January, and while I can't say I'm thrilled with the idea of residences being constructed around the course, the good news is some serious money is being poured into the course itself. The greens are now world class, and more improvements are planned.

The highest point on the course is over half a mile above the sea, which makes for some truly magnificent vistas. From various points you can see all of Kailua-Kona, the airport, Maui, Mauna Kea and on a really clear day probably the tops of the spires on the Golden Gate Bridge. The altitude also makes this the coolest course on the island weather-wise, and the perpetual cloud cover on the back nine make light rain showers a common occurrence. They pass after a few minutes but packing a plastic cover for your clubs is not a bad idea.

If you play from the whites, the length is a very reasonable 6,161 yards, but this can be deceiving. Maureen Bond, who is the marketing director and has also held a number of other positions in her fifteen years with the club, points out that most of the holes play downhill. Some simple mathematics might incline you to believe that, since the course ends the same place it starts, the total distance you go up has to be the same as the distance you go down. This is in fact the case, but the cart paths do a lot of climbing and therefore make up most of the difference. Still, there are a handful of holes that rise so steeply you can barely see the tops of the flags on the greens.

The downhills are more fun, however, and you can get dizzy standing on some of these tee boxes. The distances can be very deceiving so it really pays to play here a few times to get the hang of it. The par-3 number two hole is on the card at 199 yards from the middle tees, but the drop is so precipitous you can easily overshoot with your 150-yard club. The posted distance from the tips at the par-5 tenth is 610 yards, which is pretty intimidating until you look at the hole and realize that the drop to the green is about the same height as the Eiffel Tower.

Golf, like Ironman and life, requires visualization. The best way to visualize playing the par-3 number sixteen is to imagine yourself on top of the Chrysler Building hitting down into Central Park with nothing between you and the green except Lake Erie and the Siberian tundra. Here's what it looks like from the tee box:

Or, you can just hit a putter off the tee. It's listed as 164 yards to the middle but is so steep that if you just get the ball started, gravity will do the rest. Last year I badly mis-hit a nine-iron and just managed to nick the top of the ball. The resultant top spin was enough to roll the ball off the cliff-like front edge of the tee box, where it proceeded to tumble its way right to the front of the green.

It's about the only hole at Makalei where you're likely to get a break like that.

(Late update: Jim in the Pro Shop just called to confess that there is no such bird as an "erkel franklin." It was a bunch of guys hiding in the woods laughing at my swing.)