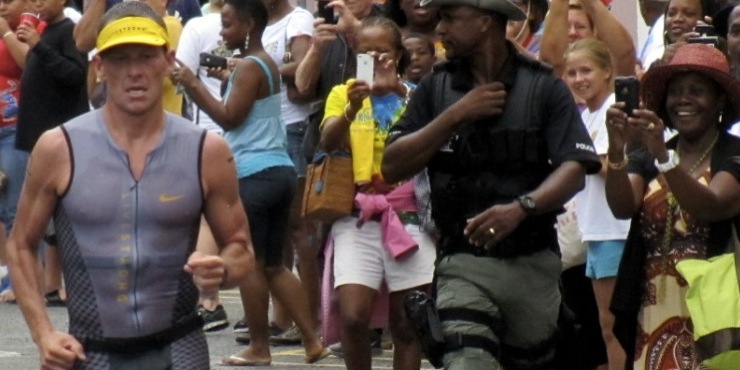 Every time I cover an Ironman event I come away thinking, That was the best venue ever. So I can’t claim much credibility if I were to say it now, yet again, but I’ll say it anyway because I mean it: St. Croix is my favorite place on the circuit.

First off, it’s an island in the Caribbean. That right there is enough to get it into the top three. Second, unlike a lot of tropical islands, it’s relatively unspoiled. That means its charms haven’t been manufactured by Acme Genuine Authentic Authorized Quaint Reproductions-on-Demand , Inc., nor do boatloads of coupon-wielding tourists descend in hordes on outlet malls measured in square miles. There are no cruise ships here and, for that matter, far fewer tourists in comparison with neighboring stops in the other U.S. and British Virgin Islands.

That’s not necessarily a happy situation. St. Croix was once a bustling commercial port but has seen better times. Deterioration and dilapidation are everywhere, and in the town of Christiansted where the race originates and ends, nearly every shop and restaurant is in or next to a half-ruined building where once-proud columns, brick facades and sidewalks are visibly crumbling. These are often very picturesque, and the town is heaven for any photographer with a creative eye, but they’re also a constant reminder that this is a real place, where real people live, often in dire poverty.

Which brings me to the best part of St. Croix, and a question: Why is this place home to some of the nicest people you’d ever want to meet? I don’t mean the kind of "nice" you get in the neighboring Shopping Capitals of the Western Hemisphere where practiced, vacuous smiles come freighted with hands held out with palms upward. People here are nice, they’re friendly, and they seem to have made an art of instant connection and easy banter. It’s a pleasure to walk the streets, to deal with shopkeepers (one who sold us a Cruzan bracelet invited us home for dinner), to crack a few jokes with taxi drivers waiting for fares, but not looking terribly stressed about getting one.

This kind of easy informality extends to the race itself. Race director Tom Guthrie’s attitude seems to be, "As long as you don’t do anything stupid, we don’t need a lot of rules." So you don’t see miles of barricades or phalanxes of officious security people. Spectators can get within inches of the finish line. Locals set up "tailgate shops" selling all kinds of unpronounceable food throughout the day. The main roads are closed, and there’s no easy way in and of town, so you might as well relax, hang out and enjoy the intimate atmosphere.

This being a tropical isle, there’s no knowing what the weather will bring. Race week, it brought torrential rains that seemed to come up out of nowhere, wreak havoc for a few minutes, then spin off down the road. Much of the bike course was treacherous, with mud and gravel run-off to contend with and several calf-deep pools of standing rainwater to navigate. Remarkably, there were no serious injuries, although crashes and road rash were the order of the day.

The big news, of course, was that Lance Armstrong was racing. This gave Andy Potts the opportunity to seal his reputation as one of the best Ironman 70.3 athletes in the world. Lance was first off the bike (insert big "Duh" here) but Andy patiently ran him down for a decisive and impressive win. Lance came in third, two minutes behind France’s Stephane Poulet, and bolstered his reputation as a serious contender.

On the distaff side, Angela Naeth demonstrated some major chops when she flatted a few miles from the finish (there were a lot of flats) and elected to just keep going. As bone-jarring an experience as that must have been, it didn’t stop her from powering her way to a solid victory and a new course record, and later that evening graciously handing out leis and awards.

Happiest camper of the night had to be Mitch Gold, my neighbor in Palm Springs, who placed third in Men’s 40-44. Badly disappointed at first because only two Kona slots were being awarded in that division, Mitch caught wind of a rumor that Hunter Temple, sole occupant of Men’s 75-80, hadn’t finished under the cutoff. He did a quick mental calculation, and hope dawned. Sure enough, Hunter was awarded a trophy but was ineligible for the slot, which rolled down to the most populous category, 40-44. Trying hard not to betray any overt signs of Schadenfreude, Mitch bounded up to the mike and claimed his slot. Personally, I thought his expression of remorse and sorrow over Hunter’s misfortune were profound and genuine.

Herewith, a few shots of the day. And when you’re doing your race planning for 2013, remember: St. Croix is da bomb.