Joe Cook is an Idiot

1,054 competitive miles is more than most people do in a lifetime. My lifetime competitive mileage wouldn’t get me from the Sears to the Ben & Jerry’s at the Mall of America, and they’d both have to stay open for 24 hours.

So when Cherie heard what Joe is planning to do, she said, "He’s an idiot." What makes this especially noteworthy is that this is only the second time she and I have agreed on anything in 31 years. (The first time was when she said my in-laws were nicer than hers, and I replied that I felt the same way. Think about that for a second.)

By the time Joe picks himself up from his last race, Ford Ironman Arizona in late November, he is going to be the sorest dude in North America. I also imagine that, after eleven months of felonious neglect, his wife Colleen is going to be mildly unamused, in much the same way as the skipper of the Titanic was "mildly unamused" a few minutes before midnight on the evening of April 14, 1912. As for son Connor, he’ll be looking around for his father so he can ask him why thousands of people are standing around muttering about "that idiot" out on the race course. And the customers who patronize the movie theater Joe owns in Yucca Valley, California? Loyal as they are, there are only so many times you can watch "Teenage Mutant Ninja Turtles" held over for the 49th big week before you start to wonder who’s minding the store.

But there are a handful of people who aren’t going to be wondering about any of that. Mostly they’ll consist of kids who are patients at St. Jude Children’s Research Hospital. Because one of the reasons this particular "idiot" will be pummeling his body and sanity like that is to try to raise $25,000 for this extraordinary facility where doctors across the world send their toughest cases and most vulnerable patients and from which no child is turned away because of an inability to pay. 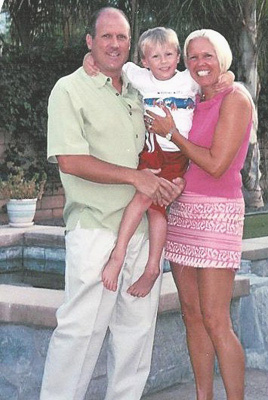 Joe is a former Marine who was in terrific shape when he left the Corps in 1992 and, much like I’ve been doing since I was three, let himself get a touch, uh, "untoned," as it were. But he got married and had a son, and decided that he’d kind of like to stick around awhile and hang out with both of them. So he decided to do something about his conditioning and started doing triathlons. Not being one to do anything in a small way, he lost sixty pounds in six months, finished Ford Ironman Arizona in 14:30, then sliced an hour ten off of that time at Ford Ironman Coeur d’Alene.

That’s when he turned into an idiot.

"I knew I’d never qualify for Kona with those times," he said, "So I asked myself, What could I do to push myself a little?" Which was a little like Roger Bannister asking himself how fast he could run to the store for a pack of smokes or Babe Ruth wondering if he could knock one over the barn.

Joe and Colleen have a neighbor whose daughter has leukemia. "Breaks my heart every time I look at her," Joe said. "There’s just nothing I can do for her, so I’m doing this."

"This" is Ford Ironman Arizona, Coeur d’Alene, Lake Placid, Louisville, Florida and Arizona again, with the Ironman 70.3 California, Hawai’i and Cancun thrown in because, after all, you can’t let yourself get soft in between serious races.

Personally, I think the world needs more idiots. Too many of them are running for office so there’s an idiot gap in America. So how about getting behind this particular one by checking out http://www.stjudeheroes.org/goto/joecook and ponying up a couple of bucks for one of the last pure causes left.

Come on. Don’t be an idiot.