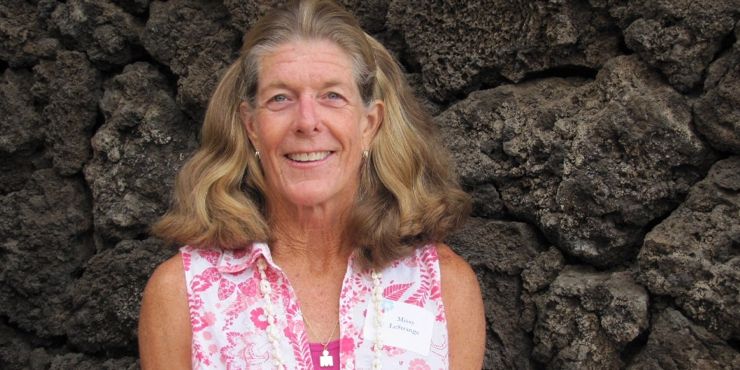 No one has captured as many world age-group titles as Missy LeStrange, who has recorded a staggering 14 wins in 24 starts here in Kona.

LeStrange’s last win came in 2004, and she has not raced in Kona since 2012. On Saturday, the legend returns.

Lee: So let us see: You have lost here in Kona ten times?

Lee: Just kidding. Fourteen is just such an incomprehensible number. What was the most in a row?

Missy: You have a real way with words, anybody ever tell you that?

Missy: The one and only Laura Sophiea. And it was such a great race. I think she passed me at mile 24 or 25 and beat me by 85 seconds.

Lee: I was there. Were you devastated?

Missy: Not at all. Don't get me wrong, I like to win, and I was disappointed, but on the lava fields you are doing the best you can.  Finishing comes first; winning is a secondary consideration for me and I ran a good race. Laura just ran a better one, and she had been trying for several years.

Lee: I seem to remember some little ceremony?

Missy: I placed a Hawaiian crown of flowers on her head on stage at the awards banquet.

Lee: So if winning was secondary, what is the primary consideration?

Missy: I initially got into it as a way to stay fit and healthy, and that has always been my primary goal.

Lee: Let's talk about how you got into it. Would have been back in –

Missy: 1983. I was swimming for Davis Aquatic Masters (DAM) and, of all people, our coach was Dave Scott.

Lee: I think I have heard of him. Six-time IRONMAN world champion?

Missy: Yes that is, The Man. And the best on-deck coach for adult swimmers. Before 1983 he'd already won IRONMAN twice, so DAM swimmers were pretty thrilled, but he was in a league of his own and it never occurred to us to actually do one.

Lee: Why is that?

Missy: At the time, the sport was only five years old, and was way off the beaten track relative to more conventional sports. It just didn't enter my mind, even though a couple of other swimmers on our team had just done it. Also, I was more focused on getting good grades in college.

Lee: So what happened that got you into your first one?

Missy: I'd been doing some triathlons locally, some of which had been organized by Dave's father, Verne, as well as some biathlons, which is what duathlons were called in those days. So a bunch of friends and I were doing a lot of cross-training to get ready for those, and before too long we'd worked our way up to a few half-distance races. Of course on the television coverage we saw Julie Moss's struggle and Kathleen McCartney’s victory the year before, and so one thing kind of led to another, and before too long my sister Denise and I started wondering out loud if maybe I should do the IRONMAN World Championship. I rationalized that I was a graduate student at U.C. Davis that was about to move and start my first job in my field, which was agriculture, and so I figured this would be my one and only shot and I'd never get another chance.

Lee: Did you have to qualify back then?

Missy: No, but you did have to put together an entry packet making your case for why the race director, Valerie Silk, should let you in. In a letter I told her about all the sports events, I'd done, like century rides, long open water swims, half and full marathons, etc.

Lee: Did Dave get involved?

Missy: Oh yes, for sure. He put together a whole training program for a friend of mine who was also going and I trained along with her. Dave helped us get oriented before we went over to Hawai'i. But, you know, there wasn't a lot of history to this race yet; there was little information.  We struggled over every decision.  What to eat, what to drink, and how to carry it on your bike. How many spare tubes to carry.  Even what to wear was a learning experience for all of us.

Lee: Did you have time goals?

Missy: I was hoping to break 12 hours, but it was more about "Am I going to make it to the finish line?" and not "How fast can I go?"

Lee: Did they have age group divisions at the time?

Lee: And this was going to be your one and only IRONMAN. We all know how that turned out, so what brought you back a second time?

Missy: I chose swimming, and then biking and running, for fitness, and for a healthy lifestyle. Once I started my new job I found that I had time for a hobby, so I kept up those three activities. But there was an odd twist that got me back into competition. I moved to Visalia in 1985 and got recruited by a junior college to be on their swim and cross country teams. I ended up taking classes as a full time student so I could swim and run for them.

Lee: So you were sitting in junior college classes with a Master's degree in your back pocket?

Missy. Yes and working out with the teams, while working full time as a Farm Advisor.  Weird, right? Swimming and running for the college teams made me faster. I also joined a local bike racing team so in 1987 I decided I wanted to go back to Kona.

Missy: I came in third in 35-39. I still wasn't trying to win, but after that race I was hooked and started to think about going faster next year.

Lee: Did that change when your hot streak began?

Missy: Well, yes, as a matter of fact. I was picked up by a triathlon team called "Team California" and I had a lot more opportunity to travel to races and get sponsored equipment. Winning started to become important when all of that started. I won Kona in '88 and '89, then came in second, and that hot streak started in 1991.

Lee: And set a couple of course records along the way. How many of those?

Missy: I think it was seven. For a year or two I held three age group records.

Missy: Yes, I was 41 years old and that record lasted twelve years.

Lee: How fast did you go?

Lee: You think? Who finally broke it?

Lee: Now that's funny. I know she really is your good friend.

Missy: For sure. She and her husband Erik are coming to Kona this week.

Lee: After Laura snapped that amazing winning streak, you won again, didn't you?

Missy: Yes, Laura beat me in 2001. I wasn’t able to race in 2002, but I returned to win twice more, in 2003 and 2004. After that my career really started cutting into my hobby, and it became harder and harder to train properly.  I was literally a "weekend warrior," but I loved Kona and doing this race so much that I kept coming.  Also, more and more terrifically talented women were coming into the race.

Lee: The pool of potential contenders is tremendous now.

Missy: It’s unbelievable. There are something like thirty women in 60-64 this year.

Lee: You've been away for two years. What made you want to come back now?

Missy: It's not like I wanted to take off two years. I just haven't been able to qualify. I was too busy to go to multiple races. This year I "got off the couch" in March and did IRONMAN Los Cabos to qualify.  Then I retired in July and have been able get out during the week and get in better shape. I feel more ready to race than I have in a long time

Lee: Last year you received a great honor, being inducted into the USA Triathlon Hall of Fame, along with Julie Moss and the late Jim MacLaren. What was that experience like?

Missy: It was overwhelming. When I got that phone call my hands literally started shaking, and I was over the moon right until the ceremony. That was really huge for me. I was really honored to be included with Julie and Jim, triathletes with whom I had raced several times over the years in many different races.

Lee: You had also served on the Age Group Commission for several years, and were the chair at one point. What was that all about?

Missy: That was something I really enjoyed, because I think we were able to make a difference. Our purpose was to represent age groupers to USAT, and in doing that we didn't just sit around expressing our own opinions but spent a lot of time going to races, talking to age groupers, soliciting their opinions and implementing a lot of guidelines in terms of how races were conducted.

Lee: What was accomplished?

Missy: We created the wetsuit rule, aligned amateur penalty rules with the pro rules, created the Athena and Clydesdales divisions, set up the Women's Commission with Judy Flannery as the chair…probably the best thing we did was set up guidelines for the physically challenged divisions. Very gratifying experience of giving back to the sport through volunteer service.

Lee: Back to Hawai'i: You've been coming here for over thirty years. Aside from the size of the race, what kinds of changes have you seen?

Missy: The number of international athletes has really grown, for one thing. The U.S. used to have the majority of competitors. Now we still have more than any other country but we're far less than half the field. And of course the competition is far more fierce, if for no other reason than the huge numbers of people worldwide who want to race. Qualifying was never easy but for many people now it's become a year-long obsession. But maybe the biggest thing is that IRONMAN is no longer the spectacle it used to be.

Lee: How do you mean?

Missy: For the first few years it was seen as this oddball event done by a handful of out-there risk-takers. Now it's practically mainstream, with dozens of events all over the world and thousands and thousands of people participating. And you hear much less "Can I finish?" and a lot more "How fast will I go?"  Of course, there are also lots of high-tech improvements now, too, not just in equipment and communication, but in nutrition and training methods.

Lee: So now you're back here. How does it feel?

Missy: Fantastic. I love coming here, and I've made so many friends over the years, it's great to be able to see them again. My two sisters are coming with me. This is our vacation, but it's so much better to come here and race than just settle for a normal vacation.

Lee: I heard you're speaking at the annual Master's Women breakfast.

Missy:  Really looking forward to seeing a lot of triathlete friends there.

Lee: What about the race? Have you got overall goals?

Missy: Sort of... I want to feel good, I want to go fast… but my plan is to just race my heart out and see what happens. I'm not necessarily trying to win, but I'd sure like to place. 2011 was the only time I didn't end up on the stage at the awards banquet and I'd like to be in that lineup this year.

Lee: Are you well trained and fit?

Missy: Better than I have been any time in the last five years.

Lee: You've got a lot of fans who'll be out there cheering for you.

Missy: Thanks Lee.  You can bet that I’ll be smiling at them.