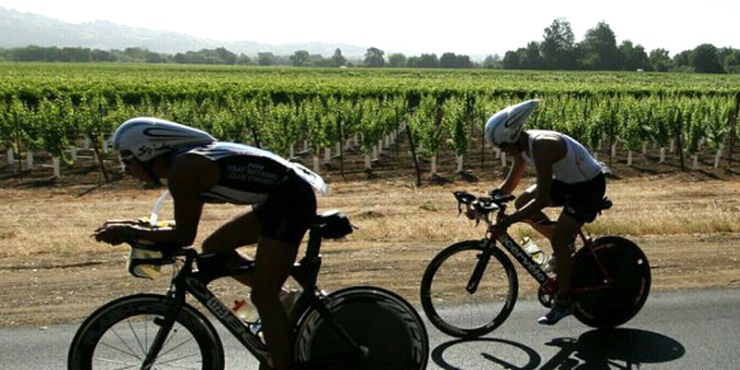 Eagle, Tin, Steel, Iron…all very cool. But seriously: How do you compete with Vineman? Do we toast with a glass of metal? Do old friends connect over flying predators? Did Jesus turn water into tin?

Wine as a special gift from above dates from well before recorded history began. Humans made wine before they made bread, which makes sense when you think about it: Somebody had to be pretty blotto before he thought of mixing eukaryotic fungi with a bunch of wet crushed wheat, letting it sit out in the sun all day until it bloated up and then lighting a fire under it. And others in the clan had to be completely gassed before they'd try to actually eat the stuff. ("Make it a small slice, OogMooga, and top off my cabernet first.")

Things evolved pretty quickly, and now we're blessed with an entire section of central California devoted to all things oenophilic. Much of the culture surrounding wine is as self-delusional as that of golf, politics and homeopathy – did you know that most wine "experts," when blindfolded, can't tell the difference between a red and a white if they're both at room temperature? Don't trust me…look it up.

Nevertheless, the stuff is marvelous and we're all the richer for it, especially those of us who have figured out that you don't have to bust the budget to enjoy it. And of all the ways that humankind has celebrated wine, there's none I enjoy as much as Vineman. Where else is the finish line arch made up of actual aging casks? In what other race do the top finishers in each category get a bottle of wine produced at the run turnaround?

For a race that has grown huge over the years, it's amazing what a down home, laid back feel it has. The fact that you can't see the enormous amount of work that goes into making it that way is a testament to both the organizers and the culture they inhabit. A bottle of merlot lying calmly in a rack for five years also betrays nothing of the often times backbreaking work that went into producing it. It's there, but hidden, and the makers seem to like it that way.

Enjoy a few pictures of this unique event. Then make plans to participate in it. First glass is on me.