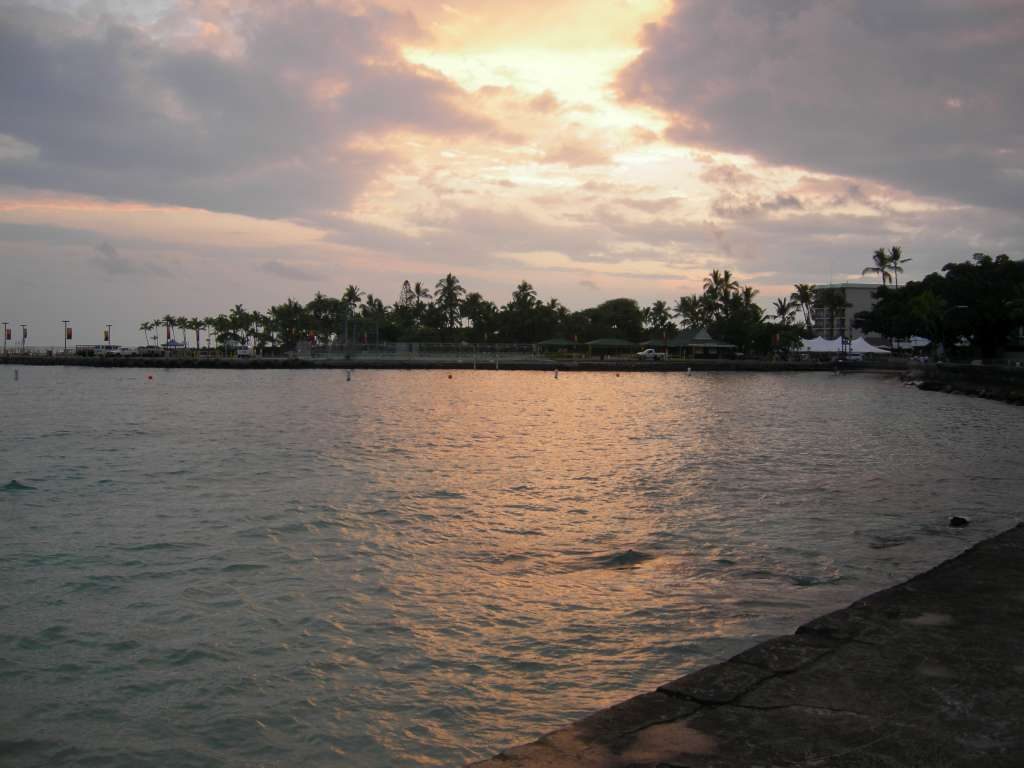 Actually, I should have called this "Pronouncing Hawaiian." As I said in Monday's blog, Kona locals are enraptured with the Hawaiian language. Everywhere you go you see words in Hawaiian: on posters, in newspaper editorials, on t-shirts, in the Aloha Airlines onboard magazine. A few years ago I decided to study a little Hawaiian because, spending as much time here as I did, I thought it would be nice to converse with the indigenous population in their own lingo. That's when I discovered that, as much as people speak about Hawaiian, nobody actually speaks Hawaiian. The sole exception is the kahu who blesses the carbo and award dinners, and while I assume he actually knows what he's saying, nobody else does, including the locals, which is why he always provides a translation.

As it happens, my linguistic efforts weren't wasted, because I got enraptured with Hawaiian myself. It truly is musical, poetic and, in an odd way, reflective of the gentle island gestalt you start to feel as soon as you arrive. So what they say about Hawaiian is really true.

Except when they say it's a "rich" language. It isn't. It may be a lot of things, but rich isn't one of them. For one thing, there are only twelve letters in the entire alphabet (all five vowels plus h, k, l, m, n, p and w), making Hawaiian the ultimate minimalist syntax. For another, there aren't that many words. Wal-Mart uses more words just to label its shelves than there are in the entire Hawaiian dictionary.

So why should race week visitors to the Big Island consider learning anything about a language that hosts no great literature and nobody speaks?

Because even though the locals don't know much Hawaiian, they pronounce what they do know extremely well, and I've found over the years that making the attempt to do the same elevates you considerably in the eyes of native Hawaiians and makes interacting with them much more fun. Off-islanders rarely pronounce place names the right way, and the locals usually won't correct them. But if they sense that you've studied up a little and are making the attempt, they take great delight in helping you get it right which, to a linguistic pedant such as me, is terrific fun.

Speaking of which, Hawaiian words are a lot of fun to pronounce, because the language is so rhythmic and musical. Compare the word "humuhumunukunukuapua'a" with, say, "prestidigitate" or "atherosclerosis" or "turret-mounted anti-aircraft gun" and you'll see my point. It really is a cool language.

So let's get on with getting you up to speed.

One of the other things that makes Hawaiian so cool is that it has stuff English doesn't. Or French or German or just about any other language you can think of, except Zulu.

One of these is the okina, which is written like this, `, a little smudge that looks like an upside-down apostrophe. Since that's kind of hard to type and I don't trust all of your Web browsers to be able to reproduce it anyway, I'll use an apostrophe. Don't worry about confusing it with a real apostrophe because Hawaiian doesn't have any apostrophes.

The okina is what linguists call a "glottal stop," a kind of catch in the throat. You see it all the time in written Hawaiian – in fact, it's right there in the word "Hawai'i" – but you probably ignore it.

You shouldn't. The okina is actually a consonant. You wouldn't drop a consonant in English, like turning "phone" into "own," and you shouldn't do it in Hawaiian either.

The okina tells you to come to a complete stop...and then start again. Take as an example the Hawaiian word "a'a." It's not pronounced "ahhhh," as a prolonged sigh, but rather "ah ah." It's two distinct syllables, such as you'd use when trying to admonish a child, as in "Ah! Ah! Don't stab your little brother in the eye with those scissors!"

Interesting factoid for you. You know how Eskimos have thirty-six different words for snow? Well, they don't, but Hawaiians have several different words for lava. Look around the island and you'll see that some lava has hardened into big, creamy looking swirls, kind of like Carvel soft-serve ice cream, only black. Other lava lies around in rough, craggy chunks. The smooth-looking swirly stuff has a smooth-sounding swirly name, which is "pahoehoe" (pa-OWE-eh-OWE-eh). The rough, craggy stuff has a rough, craggy name, "a'a" ("Ah! Ah!").

One nice thing about Hawaiian is that, like French, it's completely phonetic. (Unlike French, however, Hawaiian actually makes some sense phonetically, unless you think "soixante" is a reasonable way to spell "swasont.") There are just a few basic rules and you're off and running.

One rule is that not only is every consonant pronounced, but so is every vowel. So the name of the local airport, Keahole, has four syllables, not two, rhyming with "Way to go, eh?"

An exception is when two vowels are run together, forming a diphthong, like "ai." You run them together smoothly and pronounce it like "aye-ee," except not as two completely distinct syllables, but more like drawing out the "i" sound in "thigh." Thus, you might think "Kailua" is pronounced like "Hiya new ma," but because of the diphthong "ai," it's more like "Hi, new ma."

While we're at it: The accent is usually placed on the next to last syllable. So for two-syllable words the accent is on the first syllable — HU-la, LU-au, HI-lo— and for three-syllable words it's on the second— ko-HA-la (the mountain where the bike turnaround is), wa-HI-ni (a female), and two of the streets on the bike leg of the race, pa-LA-ni and ma-KA-la. But if there's a diphthong, that's what gets the stress: ma-KAI (meaning "on the seaside), pa-LAU-nu (brown), and Ha-NAU-ma ("curved bay" or "hand-wrestling bay." Don't ask me).

This is a good word to know because it's the only city in the entire United States composed entirely of vowels. (Okay, so it's only good to know if you get turned on by that sort of thing.) It's also probably the most frequently mispronounced city name in the entire United States, with the possible exceptions of Cle Elum and Worcester. The correct pronunciation is "Eye-YAY-yah," with that little 'okina catch in the throat at the beginning so that you don't so much say "Eye" as cough it.

Just break it down, remembering that every Hawaiian syllable ends in a vowel — humu humu nuku nuku apu a'a — and you'll see that it rhymes with "WHO knew? WHO knew? YOU do! YOU do! Ah-choo! Ah! Ah!"

It's a real word, by the way, and means "little fish with a nose like a pig's." It's also the name of a Hawaiian bar drink. Rumor has it that it's free if you pronounce it correctly.

Here's another one: "Hualalai."

It goes "HWAH-la-LIE" and is the volcano on which Kailua-Kona is perched, as well as the name of the last street before the Ironman runners turn onto Ali'i Drive for the final quarter-mile of the race. Incidentally, "Ali'i" is pronounced "ah-LEE-ee" and not "ah lee yee," because of the okina separating the i's. (It's also not "a-LEE-hee.")

The most mispronounced word in the Hawaiian language has to be "Hawai'i." It's not "huh-WAH-yee" or "huh-WAH-ee." It's "huh-WHY-ee," with the okina throat catch between diphthong "why" and "ee."

Here's one that might surprise you if you've ever been in a Waikiki tour group led by some guy who looks Samoan but is actually from Decatur or Worcester: "Aloha."

You know the guy. He's the one that makes you go "a-lo-HAH!" at the top of your lungs forty-seven times before he finally leaves you the hell alone. Well, it's not "a-lo-HAH." In Hawaiian, if there are no diphthongs or kahako (letters with a little hat ^ on them), it's always the next to last syllable that gets stressed. So it's "a-LO-ha" pure and simple, just like you always thought it was. When you hear somebody go "a-lo-HAH," you can be sure they're on the first day of their cruise.

An "e" not combined with another vowel is pronounced as in "left," not "lay." So a "haole," which means someone not of Hawaiian descent, is "HOW-leh," not "howly." (And note that it's two syllable, not three, because of the diphthong "ao"). But Makalei, which is a terrific golf course just above Kailua-Kona, is "MA-ka-LAY."

One last thing: That big city on Oahu? It's not "Hah-na-lulu." It's "HO-no-LU-lu," as in "Oh no! Lulu!" That one alone will separate you from the people who save up all year for a Hawaiian vacation and then spend all of it at McDonald's and Wal-Mart.

I leave you with this ancient Hawaiian saying:

If you think that's beautiful, it's only because the language is so cool. Translate it into English and it doesn't exactly rank right up there with the best of Oscar Wilde:

A fisherman of the shallow sea uses only a short line;

a fisherman of the deep sea has a long line.