It's not often I get jealous of other writers, but it's not often that Rick Reillys come along. The umpteen-time Sportswriter of the Year winner graces the back page of Sports Illustrated with slice-of-life gems all the more admirable for the impact he is able to generate within the stifling confines of a severely word-limited format. Although he doubtless tires of hearing it, he is indeed the stylistic heir of the late, wondrously talented and insightful Pulitzer-prize winning sports columnist Jim Murray. Like that legend, Reilly concerns himself with the human side of sports and is endlessly curious about what goes on in the minds and hearts of athletes who are more typically presented to us by the mainstream media as cardboard-cutouts fashioned by front-office flaks.

If you read the "Life of Reilly" column in SI as if it were dessert and you wish it were the main course instead, Who's Your Caddy? is your answer. To delve deeper into the psyches of golfers, Reilly cajoled a handful of them into letting him caddy for them, which is roughly akin to Yogi Berra helping you with your PhD thesis in linguistics. Yet, in the same way scientists often learn more from experiments gone wrong than the ones which succeed, the reactions of these players to the self-deprecating Reilly's sincere but fumbling attempts to do what looks so simple on television are especially illuminating. (Not to mention that you'll never again look at caddies in the same way.) Each of the chapters deals with a single golfer and reads like an extended one of his columns: The narrative pace is blistering and the key literary devices, as they were with Murray, are the howlingly funny and apt similes and metaphors.

Taking a lesson from the world of screenwriting, Reilly's preference is to show, not tell, and nowhere is this more in evidence than in the piece on Donald Trump, in which he uses lengthy, verbatim recitations from The Donald himself to prove the contention that nothing this business legend does or says is anything less than the best, the most, the highest and the greatest ever. Of all that's been written about Trump, nothing comes closer to conveying what it must be like to spend a few hours with him, and we even get a hint of an answer to the intriguing question of what Trump is like when he's alone: According to Reilly, he never is. It would seem that the man, like a quantum particle, has no objective existence of his own absent an observer.

While Reilly takes definitive and consistent points of view about his subjects (one wonders if Tom Lehman is truly a candidate for beatification), he nevertheless is usually honest enough to toss a monkey wrench into the batter even though it might undercut his basic premise. His portrait of John Daly's late-developing defiance in the face of his manifold weaknesses is compelling, but, despite knowing that our sympathy would likely devolve into something less tolerant, Reilly nevertheless describes for us a grotesque scene in which "Long John" graphically justifies that ambiguous moniker in the back seat of a car. Reilly makes it sound funny, sort of, but it's undeniably depressing.

Passing up this book because you have no interest in golf or golfers would be like passing up Gulliver's Travels because you have no interest in giants. It's not about golf, it's about people, and golf is simply the vehicle for discovering them. While it's true that you can learn more about someone playing a single round of golf with him than you can living next door to him for six months, imagine caddying for him, as Reilly has. It's also about writing, and this author is a national treasure that anyone interested in language, craft and endless creativity owes it to himself to read. 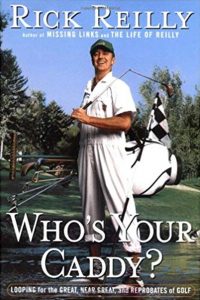