ENIAC: The Triumphs and Tragedies of the World's First Computer

In a style imitative of the two deservedly popular books Longitude and Fermat's Enigma, Scott McCartney attempts to make the story of the world's first general purpose computer accessible to a wide, non-scientific audience. In trying to strike a balance between readability and completeness, he leans heavily toward the former, which will disappoint those looking for some real meat while possibly shortchanging even the casual reader, who might be misled into thinking that this is the whole story. On the other hand, casual readers aren't too likely to pick up anything much weightier on this topic, so maybe it's a good thing.

McCartney adds little to the technical story of ENIAC's development. (For that, pick up the splendid The Computer from Pascal to Von Neumann, by Herman H. Goldstine.) Rather, his main contribution is added insight into the bickering, competition and lawsuits that characterized the birth of the computer industry. Somewhat reminiscent of the birth of television, the greatest commercial rewards went not to the originators but to those who followed and did it better. "Better" does not necessarily imply technical superiority, but has more to do with knowing one's way around the courts and the markets. Perhaps the greatest surprise to those knowledgeable in the history of computing is the author's contention that what we have come to know as "von Neumann architecture" was not invented by that eminent mathematician, but by the heroes of Eniac, Presper Eckert and John Mauchly. To learn that von Neumann may have usurped credit for the creativity of others is quite disturbing. (Goldstine's book takes the opposite view. Truth, as it usually is, is probably somewhere in the middle.) 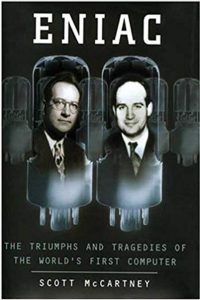