The Gifts of the Jews : How a Tribe of Desert Nomads Changed the Way Everyone Thinks and Feels

Normally, I only include books on this page that I recommended highly and unequivocally. In the case of The Gifts of the Jews, I do recommend it, but with a bit of equivocating.

There's no sense rehashing all the critiquing that has already been done on this short and fascinating volume -- it is truly a quite thought-provoking attempt at some historical paradigm shifting. My question is whether such shifting is warranted in light of the evidence Cahill brings to bear on his thesis.

Like most bible-based historical analyses, Gifts suffers from assumptive leaps often grounded on precious little substance. For example, to claim that our very concept of time evolved from one of cyclical and unbreakable repetition with no end and no beginning to our current "processive" notions of past and future because of the Jews begs more questions than Cahill tackles. Among them are how the Egyptians managed to spend decades building monuments that were intended to last forever if they were convinced it would all be for naught when the next cycle began anew. For that matter, how did the Sumerians ever get around to building cities?

The author also provides mountains of detail regarding the emotional states of biblical figures whose words and behaviors were described in the barest of minimalist proportions, attributing broad and profound meanings to mere handfuls of words. To his credit, Cahill chose for his basis an unconventional translation that hews much closer to the meaning of the original language, and in fact his presentation of that novel interpretation is the best part of this book, but some of those interpretations strain credulity to such an extent that his underlying thesis is too often undermined. As an example, jumping directly from the Burning Bush to the conclusion that "God…can burn in us without consuming" is poetic and clever but did this actually occur to the early Israelites?

Overall, there is far too much speculation upon which to hang a serious thesis, and it put me in mind of the classic skit in which one syllable uttered by a diplomat becomes three paragraphs from the translator. However, the book is so full of wonderful nuggets that it is still a delight to read, at least once you get past the overlong and overly-discursive discussion of the Sumerian "Epic of Gilgamesh," and that's why I am recommending it. Cahill's reading of the Abraham and Isaac story is tremendously moving, as is the story of the exodus from Egypt, particularly as concerns the ongoing frustrations of Moses. One of the most soul-stirring sections is the one dealing with the "minor" prophet Amos, who openly scorns the "elegant piety" of the people of Israel and exhorts them to put away the symbolic sacrifices and instead "let justice flow like water." 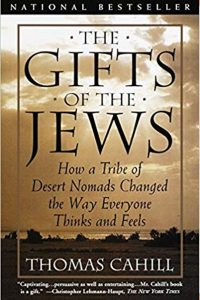