Failure Is Not an Option: Mission Control from Mercury to Apollo 13 and Beyond

Just a kid when the Mercury astronauts were first lofted skyward, I was more fascinated by what was going on in Mission Control than I was by what the astronauts themselves were doing, which was mostly just sitting there pushing buttons. I had no idea why dozens of men in the control room were sitting in front of seemingly identical monitors -- did they actually have real jobs, or was it all just for show? None of the television commentators ever bothered to explain what was going on in there.

Which is why Lost Moon, the book on which the movie "Apollo 13" was based, was such a revelation. Only then did we really learn that the extraordinarily complex spacecraft carrying the astronauts never functioned perfectly for more than five minutes at a time, if at all, and controlling a mission was about solving mind-numbing problems that were occurring thousands of miles overhead. That the men on the ground were the true heart of spaceflight was confirmed for me by the chapter in Failure Is Not an Option about the very first Apollo mission, which was flown from start to finish by Mission Control: there were no astronauts on board the vehicle.

Kranz, the buzz-cutted ex-test pilot who was the very personification of Mission Control (Ed Harris played him in "Apollo 13"), gives us an insider's view of that critical function, complete with fascinating stories of some of the more harrowing incidents that the public was only dimly aware of. Of equal interest are his observations about what it was like to build from scratch an organization for which little precedent existed.

Although occasionally repetitive and self-congratulatory, Failure Is Not an Option is nevertheless a compulsively readable, engineer's-eye perspective on what is arguably one of the two or three greatest technological triumphs in history. Like Lost Moon, its only major fault is that it's entirely too short. 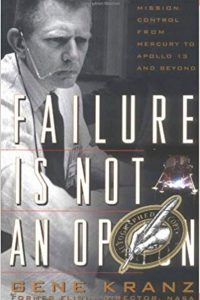