I normally review only newly-published books, but recently came across something older that was too good not to share.

One of my favorite stories, and one that has haunted me since I heard it, is the one told by comedian Stephen Wright concerning two babies born within minutes of each other and laid side-by-side in the hospital's nursery. Ninety years later, they find themselves once again side-by-side, this time as two old men on their deathbeds in the very same hospital. One turns to the other and says, "So...what'd you think?" It's an extraordinarily concise encapsulation of the central mystery of our lives, which is why we even have lives in the first place.

But imagine if you had your life to live over. Not just a day or a week but your entire adult life. In the case of Jeff Winston that amounts to some 25 years, the period between his death of a heart attack in his office in 1988 and his reappearance as an 18-year old in his college dormitory in 1963.

Once the shock wears off, he does pretty much what I might do: start playing the stock market and the sports book, knowing in advance exactly what is going to transpire. Naturally, he becomes a very rich man; it's not a difficult feat if you parlay a few Kentucky Derby longshots into a nice little bundle and then use it to do things like buy as many Apple and Microsoft shares as you can on the days their IPOs opened. You might even exploit your wealth to pick yourself up a nice trophy you spotted at the Caesar's Palace pool and do some serious international partying, maybe even spend a little time trying to alter the history you know is coming. Is it possible to intercede on behalf of John Kennedy and prevent his assassination?

Reading the first part of Replay is to watch Winston wallow in all your delicious fantasies but to feel, as he feels, the growing realization of their shallowness. It is inevitable that disappointment is the ultimate endgame, and you anticipate feeling cheated by yet another science fiction-y time travel saga. Except that you're barely a fourth of the way through the book when he once again succumbs to a heart attack. What gives here?

He starts all over. Right back to his dorm room at the age of 18. Now armed with the lessons learned from his two previous shots at life, he gets to do it all again, and that's what distinguishes this extremely clever, thoughtful and finely-wrought novel from your run-of-the-mill, overgrown pulp-magazine short story. What would you do now: lead a more noble life? A more debauched one? Find a better mate? Try to change the world or just make your own small corner of it more livable?

The obvious reference here is to the movie "Groundhog's Day" but Replay has about as much to do with that light farce as chess does with Go Fish. I don't want to spoil the fun, except to tell you that Jeff Winston gets to live his life over and over, each time with all his memories completely intact, even able to set things up in one life in preparation for his return for the next round. Author Ken Grimwood thankfully doesn't squander the premise, but wrings out of it some wonderful stories, a very human lead character, and a number of philosophical divertissements that, while occasionally threatening to fall over the cliff of self-indulgent preachiness, somehow manage to stay relevant and readable.

Since discovering this treasure of a novel, I've learned that it is fairly common for fans to buy them by the bushel as gifts. Once you read it, you might be tempted to do the same. 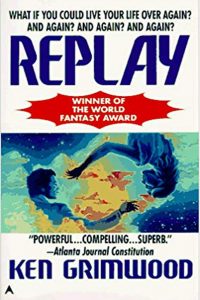