When "atom spies" Julius and Ethel Rosenberg went on trial in 1950 there was a third American defendant. While the Rosenbergs took the stand in their own defense and adamantly maintained their innocence, which so angered the judge and prosecutors that the death penalty was imposed, Morton Sobell remained silent on advice of counsel, and waited for the government to fail to make its case against him. He was convicted anyway, but his silence might have saved his life: He was spared the death penalty and sentenced to a 30-year prison term instead. He served 18 years, 5 years of them on Alcatraz, which is where much of ON DOING TIME takes place. The book was first published in 1974 but was just reissued by the Golden Gate National Park Association.

Despite the title, the book is about much more than what it was like for an extraordinarily decent, gentle and probably innocent man to be locked away in the country's most notorious maximum security penitentiary. This is Sobell's first person account of the events surrounding one of the most infamous trials in American history, which sparked demonstrations all over the world and began a debate that still rages today. His insights into the trial and the events leading up to it are as valuable historically as they are fascinating. The new edition includes a CD that contains many of the heretofore-classified documents he fought for decades to get his hands on.

Sobell's quest to unearth these documents was not driven by his desire for exoneration -- he seems unconcerned with whether anyone believes in his innocence -- but by his fervent wish to expose what he considers the devious, underhanded and outright fraudulent means to which the government will resort in its pursuit of "undesirables" in emotionally-charged situations. (I imagine he danced a jig when the government's reprehensible treatment of Wen Ho Lee was exposed.) He is particularly incensed about the highly-publicized "Venona" decryption project that purportedly led to his and the Rosenbergs' apprehension and, using the files on the CD, does a mighty convincing job of demonstrating how absurd some of the links between cabled code names and actual persons were arrived at.

ON DOING TIME, however, is not another rehash of the facts and speculation already well-covered in dozens of books. It is the very human tale of how it all affected one man who, to this day, refuses to be bitter and insists on casting his personal experience in a larger historical and political context, all of which is heavily layered with his persistent and unapologetic left-wing slant. It is extremely well-written, gripping and enlightening, and I recommend it very highly to the general reader as well as the armchair historian. 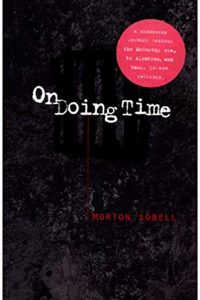