In the Beginning: The Story of the King James Bible and How It Changed a Nation, a Language, and a Culture

Although it's the most widely-read and best-selling book in history, surprisingly little is known about  the King James Version of the bible by most of those who read it on a daily basis. As it turns out, millions of people who consider it to be the very word of God don't even realize that it's a translation rather than an original.

Many of those who are familiar with its origins, and who heap praise on it as a peerless literary gem, are not aware that the original bible was written in the everyday language of the common working man, and that the elegance of the prose in the KJV was essentially a fortuitous accident rather than the intent of its translators. The translation was carried out at a crucial turning point in the English language, and the committees established by James I struggled continuously with which words they should use: those of the current day, even though they knew those words would soon be passé and possibly unintelligible to future generations, or the newer usages, which they couldn't be sure would last? As an example, the early 17th century word for the neuter possessive we know as "its" was "his." This has led not only to a number of puzzling passages but also to many that are tortured attempts to get around the problem: Rather than "Its height was twenty cubits," we get "The height was twenty cubits thereof," which we may think is elegant but not when that awkward construction appears three times in a single sentence describing the proper construction of an ark.

In the Beginning, a splendidly readable account of how the KJV came to be, is filled with such fascinating tidbits, as well as more substantive and disturbing ones. Church authorities were bound and determined that bibles only be available in Latin, feeling (correctly) that their power arose at least to some extent from the inability of their congregations to understand the Book without assistance from clergy. But the Reformation that was sweeping Europe at the time was based in part on the belief that the bible should be available to all the people, in their own language (hence the term "vernacular bible"), just as the original was. (The Old Testament was in the Hebrew and Aramaic of farmers and laborers; same for the Greek of the New Testament.) This was no scholarly debate, either; William Tyndale was publicly strangled for writing an English version of the bible.

One of the strengths of In the Beginning is how well it acquaints us with the power of the ruthless Middle Ages church and its inseparability from government. The role of politics in the structure of the KJV is explored, too, such as in the decision-making that led to the inclusion of the Gospel of John and the Apocrypha, neither of which was universally viewed as the word of God as were the other sections.

Despite a good deal of maddening repetition that often makes the book sound like a committee report ("Tell them what you're going to tell them, tell them, then tell them what you told them"), it's a compelling and intriguing read, its scholarship exemplary and its conclusions well-grounded. Especially revealing are the comparisons among several translations of well-known passages, which demonstrate the extraordinary degree to which all-too-human, seemingly arbitrary decisions (the Greek word ekklesia was translated as "church" but was more closely akin to "congregation") crept into a work which, more than any other, shaped our language and culture. Because of that undeniable influence, In the Beginning is a must-read for anybody who thinks, even if they're non-Christians or non-believers altogether. 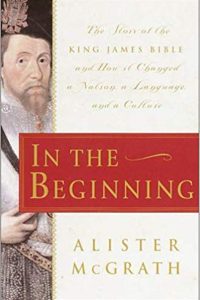