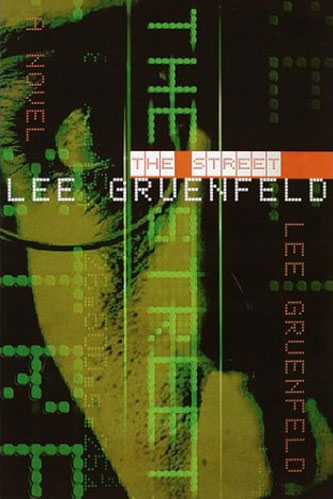 James Vincent Hanley, a Wall Street stockbroker specializing in Internet startups,finally decides to jump to the other side of the Street and into the biggest game in history. He’s learned the dot-com lesson well and launches his own start-up, with ingredients that are pure dynamite.

The Street is notable for having predicted the dot-com bust, and was published one month before that notorious meltdown occurred.

James Vincent Hanley, a Wall Street stockbroker specializing in Internet startups unhappily slaving away for a subsistence wage of only $300,000, finally decides to jump to the other side of the Street and into the biggest game in history. He’s learned the dot-com lesson well and launches his own start-up, Artemis-5.com, with ingredients that are pure dynamite—technology so cutting-edge it’s barely decipherable, a world-class board of directors whose credentials command a lemming-like public following, and carefully orchestrated Street buzz of epic proportions.

Jubal Thurgren, assistant director of enforcement for the Security and Exchange Commission and a man of Columbo-like intelligence and personality, smells a rat. Even as the buzz increases, Thurgren's instincts tell him that Artemis-5, which has yet to reveal any substantive products or services, may not be quite what Hanley has cracked it up to be. As public delirium over Artemis-5’s impending stock offering escalates, Hanley and Thurgren, each with a spy in the other’s camp, launch elaborate and progressively more dangerous cat-and-mouse games.

Each of them is deeply committed to his own cause: Thurgren can’t let Hanley continue unchallenged, and Hanley can’t let Thurgren get in the way of his plans. The two of them spiral inexorably toward a final confrontation, a complex and explosive sting where deceit and betrayal do suspenseful battle with old-fashioned idealism and the search for truth.

Featuring the most likable and insidious cast of characters since "The Sting," The Street is sure to satisfy thriller lovers, business-story aficionados, and all of us who are hopelessly confused by a new, Net-crazed economy that threatens to overwhelm not only our culture but our common sense.

Nelson DeMille, bestselling author of The Lion's Game and The General's Daughter:

"An unputdownable financial thriller that is certain to become must-reading for all of us stumped by the new economy dot-com meltdown, The Street's full-bodied fictional cast reminded me of those profiled in James Stewart's Den of Thieves. Gruenfeld is a masterful storyteller."

"The novel succeeds as a blend of the world of Wall Street -- part Cliffs Notes guide to the rhetoric of an insider, part history of the manic tendencies of the economy and part William Goldman-type thriller where bullets are dodged and a sly double agent plays the odds. [Gruenfeld's] best writing surfaces in brief, stolen moments, when the dialogue naturally unwinds."

"Someone was bound to do it -- write a thriller about the dot-com meltdown -- and this one is a humdinger."

"In telling this story, author Gruenfeld...may well be capitalizing on his own career history -- he was once a management consultant at Deloitte & Touche. In The Street, he weaves canny details of high-tech finance into a fast-paced, hyperrealistic story that recalls the dotcom madness of Eyeball Wars and the financial excitement of Nest of Vipers, plus elements from The Sting and a cast of characters reminiscent of the best of Grisham. Along the way, he serves up a better tutorial on the stock market than you'll find in most business books. Gruenfeld explains technical terms and industry slang in lay terms, often using one character's ignorance to allow another to clarify something. The book comes at a perfect time: The new economy isn't dead, but it's ready for a charlatan shakeout. I'd rate The Street as an outperform."

"A Wall Street caper whose bite and punch come from deft plotting and first-class insider knowledge. This business-world thriller crackles with incisive wit, cat-and-mouse moves, and an unforgettable message."

"Spiced with gunplay and tense stand-offs. Author Lee Gruenfeld is a former management consultant who knows business and has a deft touch with detecting. Savvy readers will enjoy his parodies of market makers."

"A cutting-edge story about greed and manipulation. A savvy mix of satire and suspense...astonishingly prophetic"

"Determinedly, [Jubal] Thurgren goes after [James] Handley; dexterously, Handley fends him off. Both are super-brilliant, each wholeheartedly committed to each other's destruction. As always with Gruenfeld, there's plot aplenty here."

"The dark side of entrepreneurship and the market dynamics of the Internet Age. A truly gripping read that you cannot put down."

"A savvy mix of satire and suspense. Astonishingly prophetic. A cutting edge story about greed and manipulation...heading for a final, explosive confrontation."

"The Street is a sharp thriller. Hanley works the world of IPOs, cable stock shows, and venture capital so deftly that the lines between financial genius and master con artist are almost completely erased. Novelist Gruenfeld knows this universe; his explanation of short selling and its perils should be reprinted in every investment guide."

Gerald Petievich, author of To Live and Die in L.A.:

"Lee Gruenfeld has captured the insider's feel of the current business scene. In a compelling thriller that pits a dot-com entrepreneur against a government gumshoe, he takes the reader on a crooked road that leads behind today's Wall Street Journal headlines and into the heart of greed. This is a well-written page-turner that ranks with the best of the genre."

"On the Street, this would be a 'buy' recommendation - years from now, people will call this book a prophetic classic about the new economy of the millennium."

"A rollicking, pulse-quickening thriller that should be required reading in every business school and investment club in America."

"As someone who led a real Internet business success, I was amazed at Gruenfeld's insights regarding what went on with the many less than real dot.coms. He has done a remarkable job of exposing the ugly underbelly of the feeding frenzy that continues to grip the U.S. Internet market, including the unholy alliance among some entrepreneurs, venture capitalists and Wall Street. His characterization of the financial news networks and securities analysts is especially apt and damning. Anyone who has an interest in technology companies, the Internet and Wall Street, and who likes a rollicking good story told with skill and daring, will not be able to put this book down."

"A bang-on sendup of the 'new economy;' a smart, savvy and extremely entertaining book."

"The Street is a worthy addition to the ranks of The Predators Ball, Bonfire of the Vanities, Barbarians at the Gate and Liars Poker. Lee Gruenfeld has woven an entertaining yarn that will make you laugh and sweat at the same time -- part thriller, part satire, part financial scam and all fun. Wall Street will never be the same, nor should it be!"

"The situations in this book are so true to life it's almost eerie. This is as close as most people will ever get to knowing what it was really like to start an Internet company in those heady days."

"Lee Gruenfeld's The Street is an hilarious satire of Wall Street and an illuminating guide to the New Economy. It's also a brilliantly effective whodunit that will keep you excited through the closing lines. Gruenfeld has a novelist's eye and ear, he's a savvy observer of the economic scene, and he has the nowadays unfashionable virtue of historical perspective. If you want to see clearly into the blinding world of Internet economics, The Street is a very good place to start; and once you've read this book, you'll never make an investment in quite the same way again."

Richard Nehrbass, Professor of Management, California State University,
aka "Zachary Alan Fox" (author of All Fall Down; Cradle and All):

"Intelligent and insightful. A roller coaster ride of financial shenanigans and a fiendishly clever tale of the mirage that is today's dot.com universe, with more than enough surprises to keep the pages turning into the wee hours of the night. Read this book, then rethink your investments before it's too late."

"Delusion, greed and irrational exuberance combine to create one of the all time great works of fiction involving Wall Street."

"Twists, turns and intrigue in the new setting of dot.com mania and IPO insanity. This thriller carries a message: If you like high-risk investments, stick to lottery tickets."

"Gruenfeld delivers an insider's look at Wall Street. The Street is a tremendous novel."