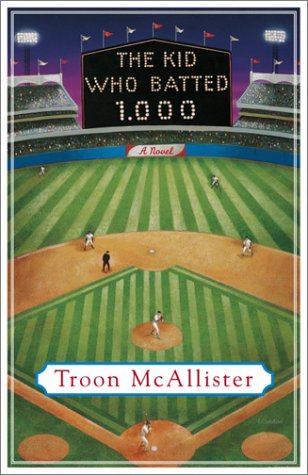 In elementary school some forty years ago I heard about a baseball book written for children in which a rookie ballplayer could hit any pitch foul and walked every time he came to bat. In the years since, I'd never forgotten that simple story line but all my efforts to locate a copy were of no avail, and I always regretted that such a wonderful story might be forever lost to obscurity.

When Doubleday asked me to write a book about baseball, my instincts drove me clearly in one direction, which was to take that basic premise and write a story for adults. Only after I turned in the manuscript did a remarkable coincidence come to light: Doubleday itself had published the original, in 1951. It was entitled The Kid Who Batted 1.000, by Bob Allison and Frank Ernest Hill, and I was finally able to obtain an original copy and read it.

My version has little in common with the original other than its very simple, very wonderful premise.

The Des Moines Majeskyks are deep in the cellar…so deep that major league sports writers are snidely suggesting they must have started playing before the season actually began in order to wrack up their record. They do have one star, Juan-Tanamera “Bueno” Aires, an ex-basketball phenom who performs miracles at the plate and magic in the field. Unfortunately, team owner Holden Canfield, who’s struck it rich with an Internet start-up, spent the entire team budget on acquiring “Bueno,” leaving the rest of the roster painfully devoid of talent.

Manager Zuke Johansen has just about given up hope when an unexpected thing happens: a scout introduces him to Marvin Kowalski. A straight-A student, valedictorian of his high-school class, and on his way to MIT, Marvin knows nothing about the rules of the game—and his pencil-thin physique would get him laughed off a big league diamond. But Marvin has one brilliant skill. The ultimate “one-tool” player, Marvin has such a good eye that he’s never the least bit tempted to swing at pitches out of the strike zone. And his reflexes are so sharp that he can always put enough wood on the ball to dribble any strike foul. He may not be Babe Ruth, but Marvin has the potential to exhaust—and enrage—opposing pitchers, before taking his walk to first base time after time. In his current predicament, Zuke can’t help but wonder if Marvin’s strange talent might lift his Majeskyks out of the cellar….