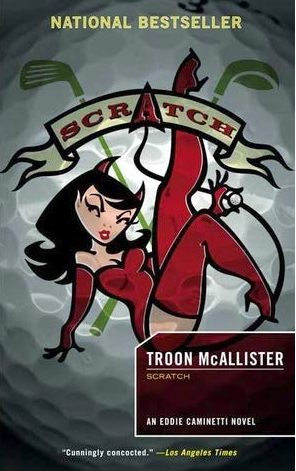 In his highly-acclaimed bestseller The Green, Troon McAllister introduced us to Eddie Caminetti, the greatest golf hustler who ever lived. Wildly popular with readers, Eddie became the first fictional character ever to have a golf tournament named after him. After gleefully tipping over a variety of sacred cows in his first two books, Eddie now takes devastating aim at the golf manufacturing industry.

Following a stunningly awful and career-threatening performance by his old friend and former caddie "Fat Albert" Auberlain at a major golf tournament, Eddie teams with a brilliant physicist to create Scratch, a golf ball so revolutionary people start riots to get their hands on it. One of the top pros in the world even gets caught on camera using the Scratch in a tournament, despite his being sponsored by a rival company, the Medalist Corporation.

Medalist is getting so badly battered in the marketplace by the Scratch ball that CEO Tommy Trevillian, a towering figure in the world of golf manufacturing, launches a lawsuit against Eddie and his company in an attempt to drive them out of the market. Eddie, acting as his own attorney in the climactic trial, is less concerned with winning the case than with demonstrating that golf equipment manufactures provide the lowest return on the highest investment of any business segment since the dot.bombs. Not to their investors they've made fortunes but to their customers, ordinary golfers so desperate to improve their games they soak up marketing hype the way sinners soak up the promise of salvation.

Eddie's spectacular exposure of the sinister underbelly of the equipment industry is hysterically funny despite the serious themes he tackles. Along the way we're treated to some brilliant and riveting hustles, fascinating characters, and one or two lessons about human frailty and resilience that have much more to do with life in general than with golf.

As Eddie himself put it in McAllister's second book, The Foursome: "Why do you think they call the devil Scratch?"

"Cunningly concocted...a credit to McAllister's style and the entertaining nature of Eddie Caminetti, as shrewd, cunning and, at times, deceptive as they come. All of which contributes to his popularity in golf fiction."
-- Los Angeles Times

"The strength of the book is in the hilarious sendup of the professional
golf industry...and the sycophantic sports media that caters to it."
-- Publishers Weekly

"Sweet mysteries of life, golf. Sidesplitting, hilarious. A reader just wanting some entertainment...will get more than his money's worth...all wrapped in laughter. "
-- The Sun

"[A] great new addition to the Eddie Caminetti series. Touches upon man’s characteristic search for signs of hope where he can, in a far broader context than the business of selling sporting goods that forms the basic plot of this entertaining novel."
-- HoleByHole.com

"Filled with dialogue so believable, it seems to take on a voice of its own. Masterfully developed characters...a wonderfully crafted tale...a remarkable display of plot braiding. McAllister’s finest accomplishment."
-- Brian Egeston, The Big Money Match