Vineman: They Can't Gag Me Anymore 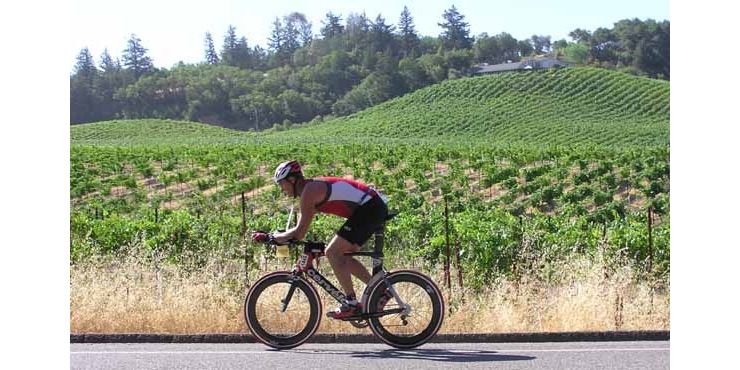 Readers probably aren’t aware of this, but I’ve had on ongoing battle with the powers that be in the Ironman head office. There are things they simply won't let me say, even if purely in jest or if I try to write them in Swahili.

As an example, I’ve tried to make humorous reference to athletes popping a few cold ones out on the lava fields, but every time I do, it gets bleeped.

Don’t believe me? Watch this:

"Sure is hot out here at Mile 17. Hey, whaddaya say we ask that spectator if he’ll let us grab a cold **** from his cooler?"

But I’d like to see them stop me this time. Because we just got back from the Vineman 70.3 and everything about that race revolves around one thing. Yes, I’m talking about ****!

The very name of the race refers to the Good Lord’s greatest gift to humankind (not counting ***).

Just driving to the start line takes you through miles of stunning **** country. The bike leg winds past dozens of the world’s most renowned ****ries, with names like Chalk Hill, Silver Oak, Clos du Bois and Jordan. Come a day or two early and you can spend hours tasting remarkable ****s that have captured medals and earned praised from **** critics far and wide.

The turnaround of the run is actually inside the La Crema ****ry and, to top it all off, prizes for age group and pro winners are – you guessed it – bottles of **** in beautiful wooden boxes.

And here’s a tip for you loved ones and athletic supporters: If you follow your SPAM (significant participating athlete/mate) around on the course, you can pull into the Kendall-Jackson ****ry at Mile 50 of the bike, load up the Hummer with five or six cases of primo cabs and zins and still make it to the start of the run.

Okay, that’s it. I give up. The rest is in pictures.

The normal tranquil Johnson Beach on the Russian River is the start of the race. 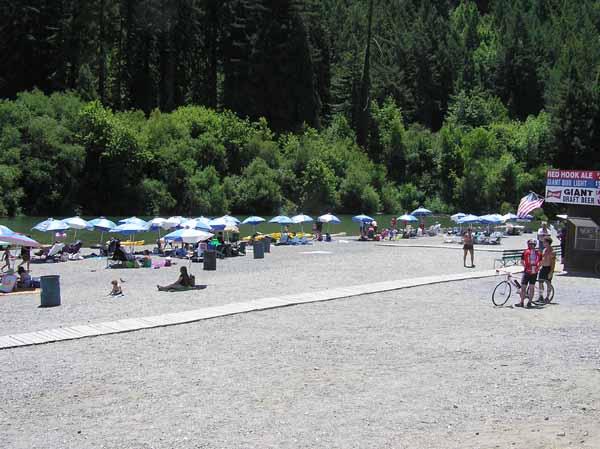 The beach has been owned and operated by one family since the Ice Age. The latest clan custodians are Clare and Carla Harris. 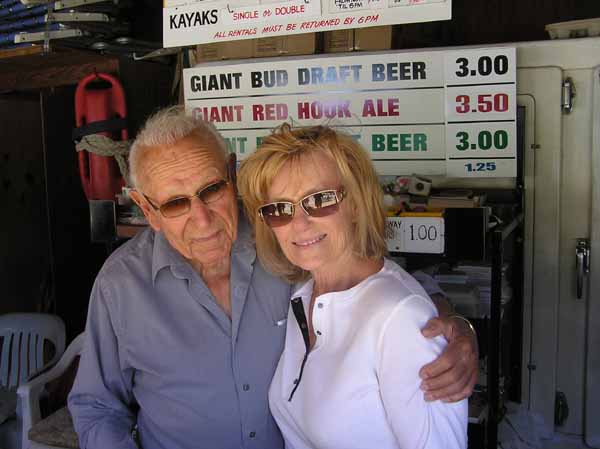 If you don't think running the beach is a labor lof love, check out the prices. That's not a souvenir sign from the Fifties, either: The prices are current. 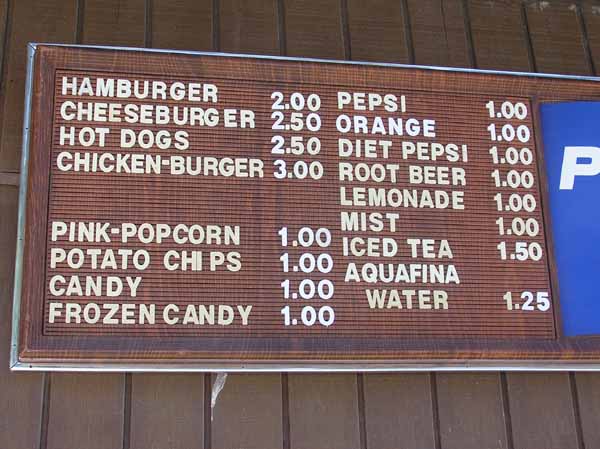 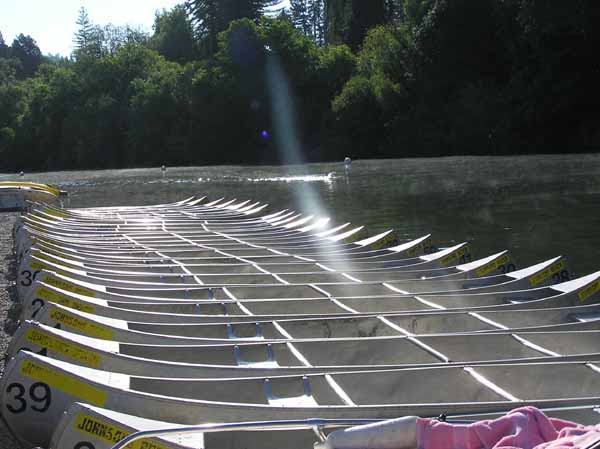 Were it not for this dam just behind the swim start, the river depth would barely be enough for a wading pool. As it is, you can pretty much walk the full length of the swim. 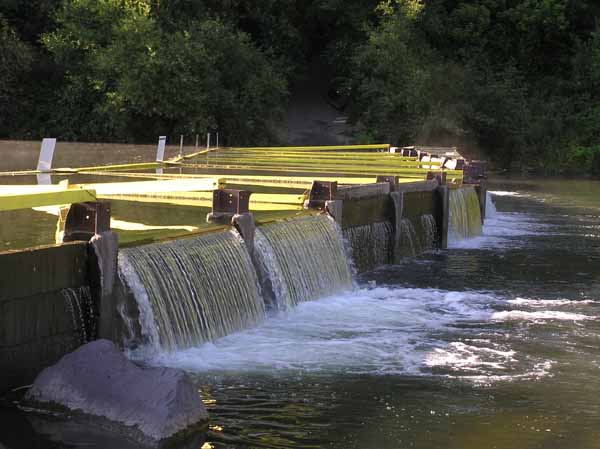 Defending champ Joanna Zeiger looked strong going in, but would get sidelined toward the end of the run by a bout with asthma. 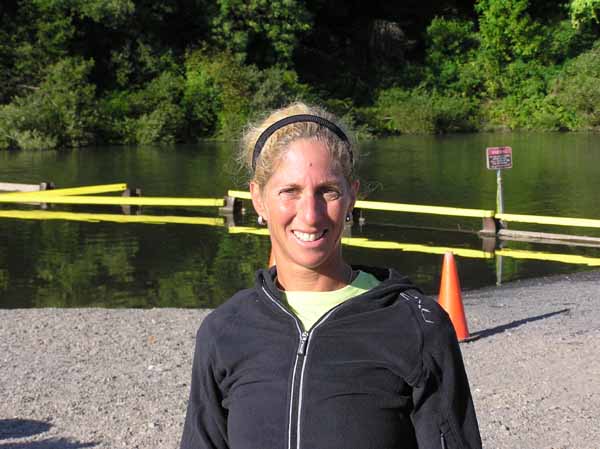 If the pro field looks chilly, it's because the air temp was about 57 degrees. Later in the race, debilitating heat would claim a number of competitors. (Day-night temperature swings over 40 degrees are common in this area in the summer.) 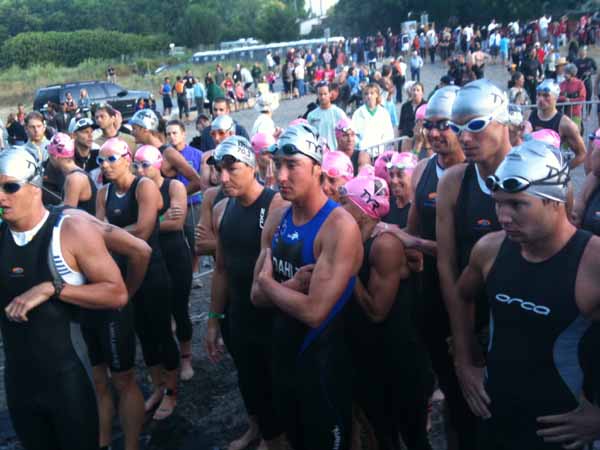 Mist still hung over the river as the pros got started. 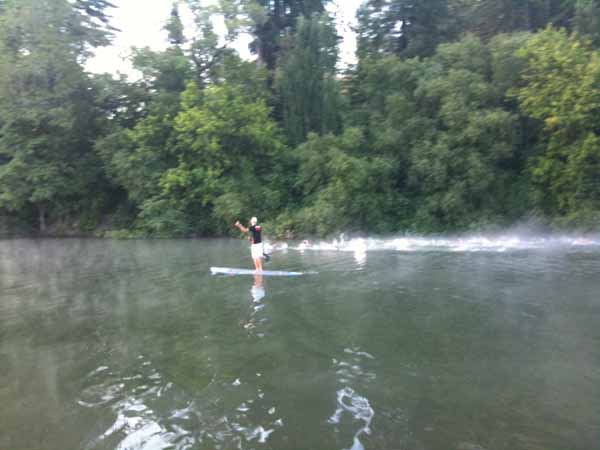 One of the prettiest swims on the circuit. 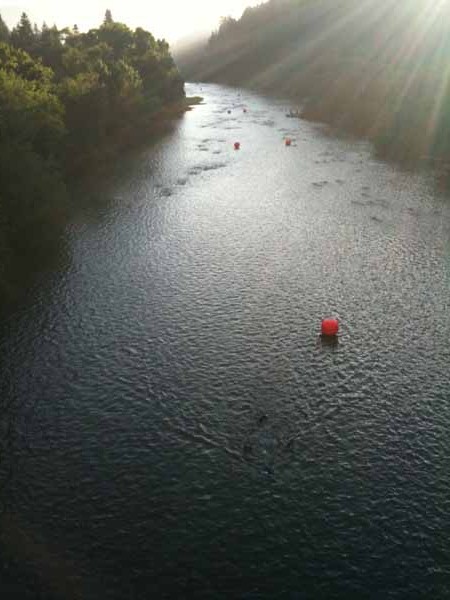 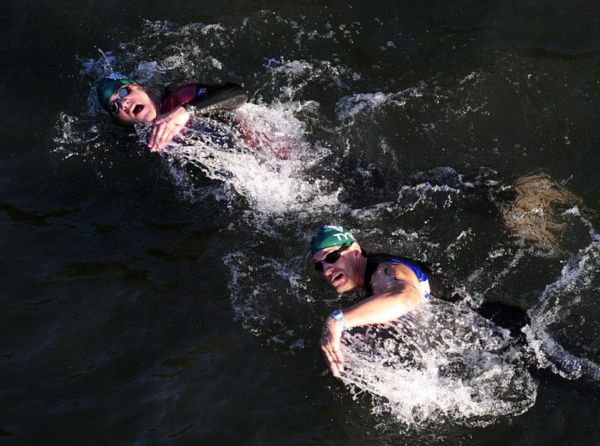 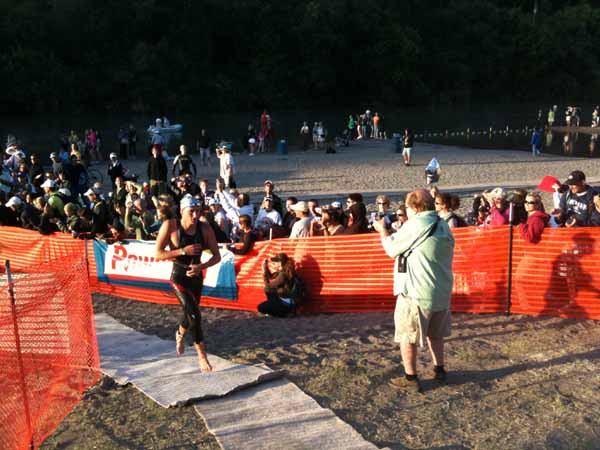 John Dahlz was first out of the water, and would eventually finish fourth overall.

Not photographed: Just before 8:00 a.m., a rotting oak tree at approximately mile eight of the bike leg fell across the road and struck a cyclist, pinning him to the ground and causing a compound fracture of his arm and injury to his back. A rider behind him broke a collarbone when he was unable to stop in time, and a third rider also broke a collarbone went he went down in the ensuing logjam.

The fire department responded in seven minutes, and five minutes after that they'd freed the pinned cyclist using chain saws and had one lane of the road cleared. By that time, 100-150 cyclists had amassed behind the scene but they cleared the area quickly. Racing resumed about fifteen minutes after the accident.

"Never had anything remotely like it happen In twenty-four years of doing this," race director Russ Pugh said, shaking his head in disbelief. "If the fire department hadn’t responded the way they did, the entire race would have ended right there."

A squirrelly turn at Mile 18 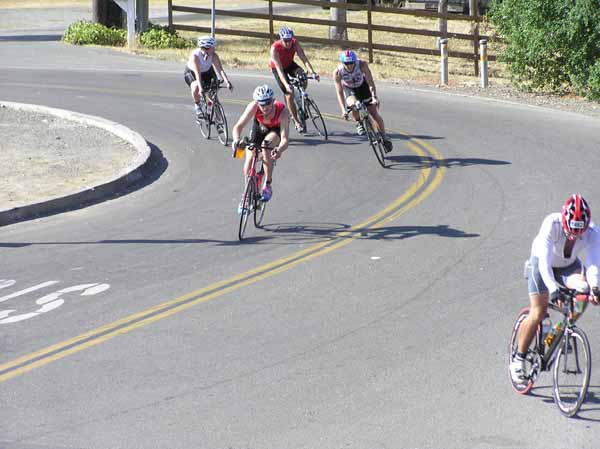 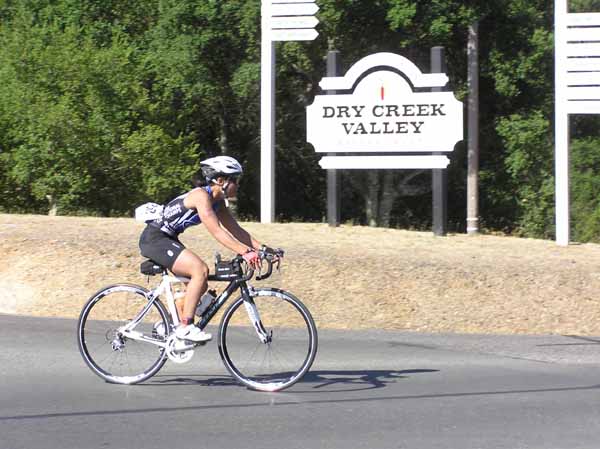 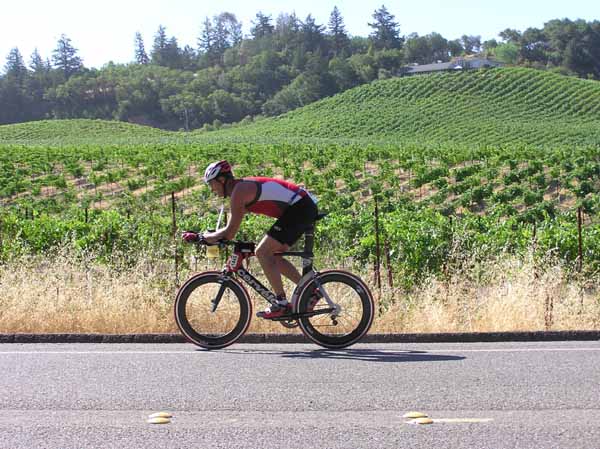 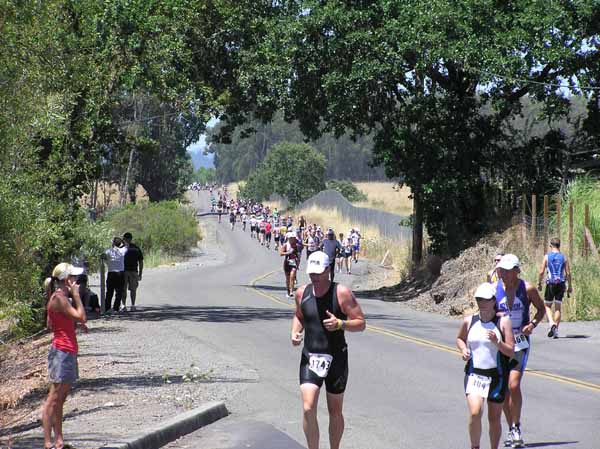 A cooling shower. Never saw so many people running in place for so long. 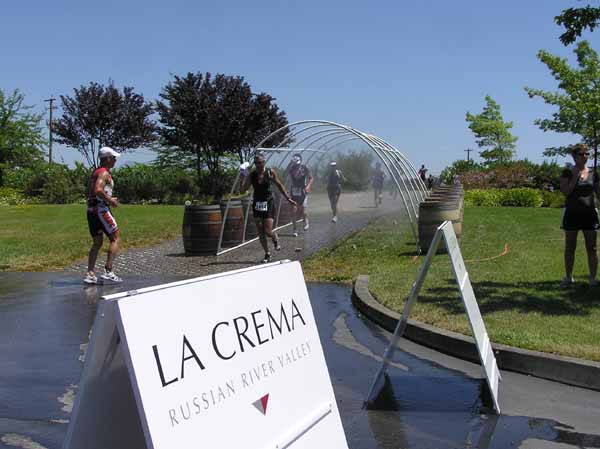 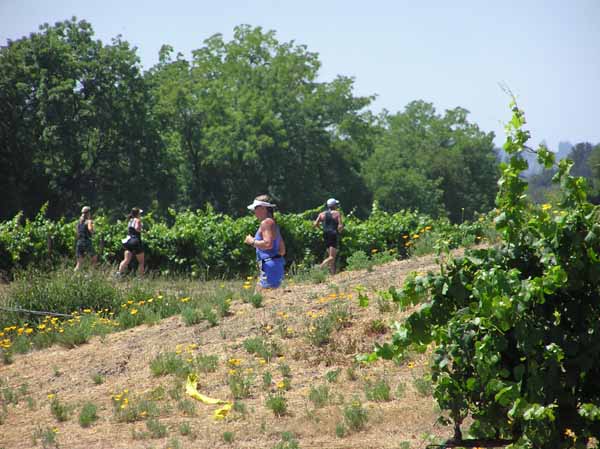 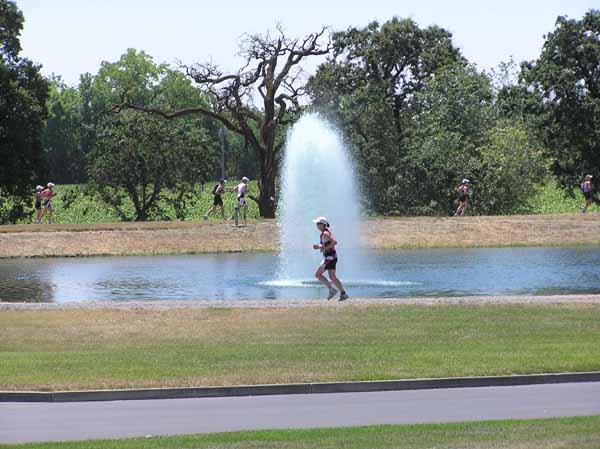 The overall winner. And in case nobody recognized him... 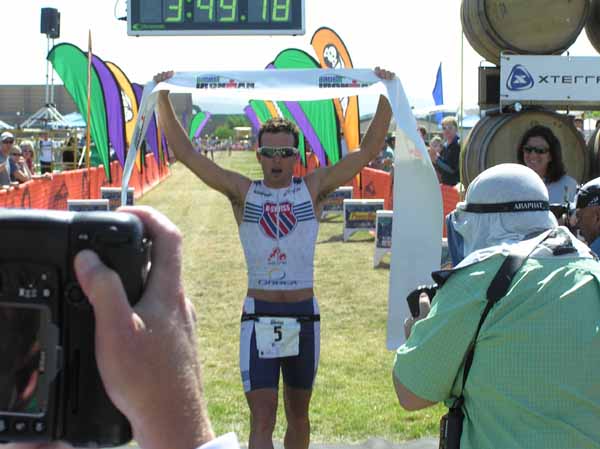 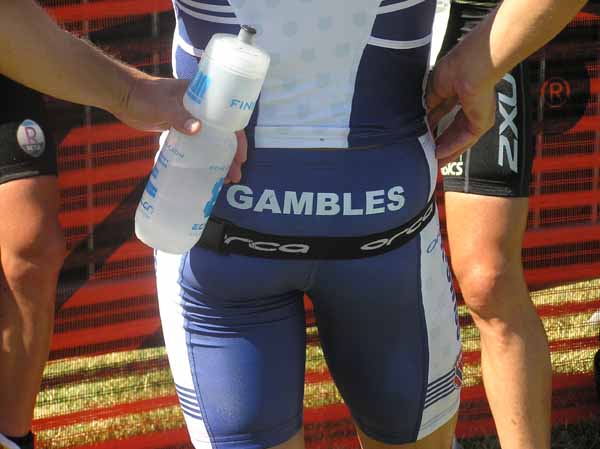 (According to the official record, though, they're all from Boulder, Colorado.) 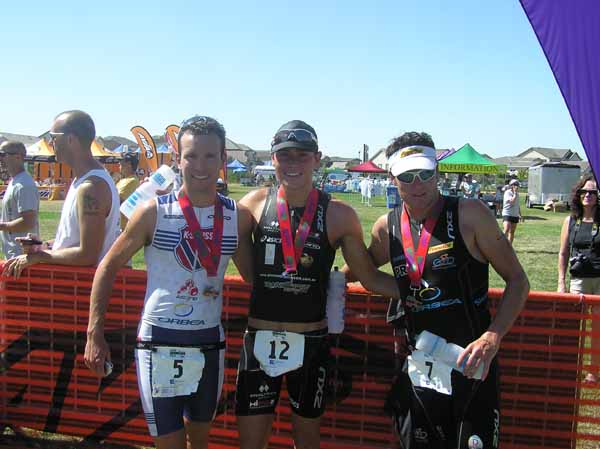 Vineman 70.3 defending champ and current world Ironman champ Craig Alexander was the odds-on favorite to win, but stomach problems got in the way. He nevertheless kept his sense of humor as he sashayed across the line in eighth place, unpeturbed by the tough go and full of praise for his mates. (Craig is from "Boulder," too). "At least I finished," he told us. One tough guy. 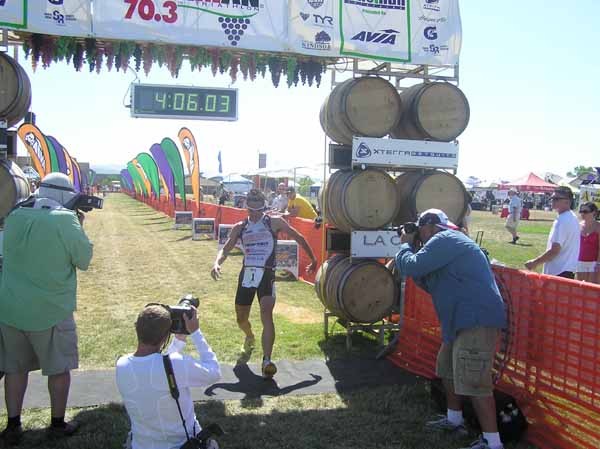 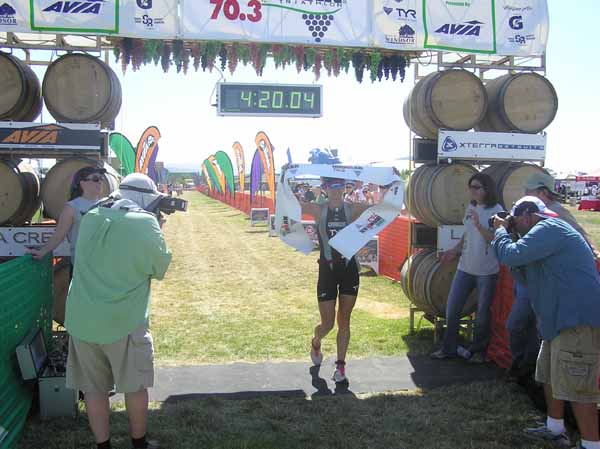 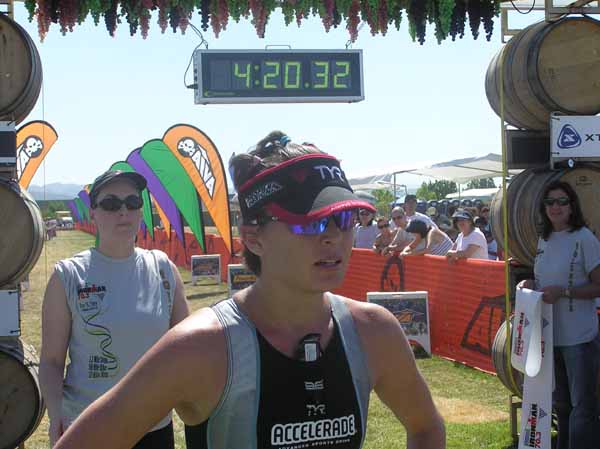 Age groupers felt the brunt of the heat as temps kept soaring. 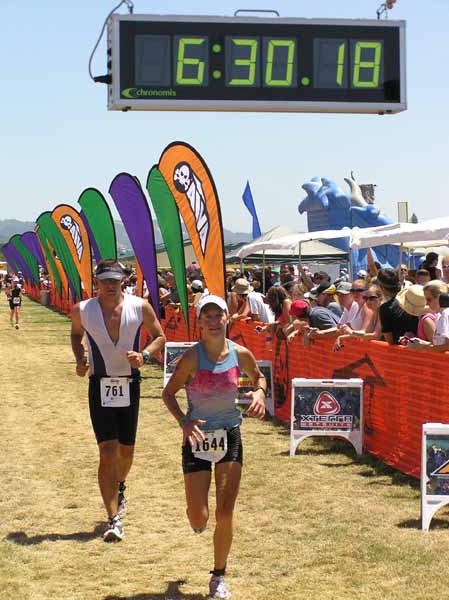 Finish line volunteers do to Cherie Gruenfeld what I'd like to do but can't because she can beat me up. 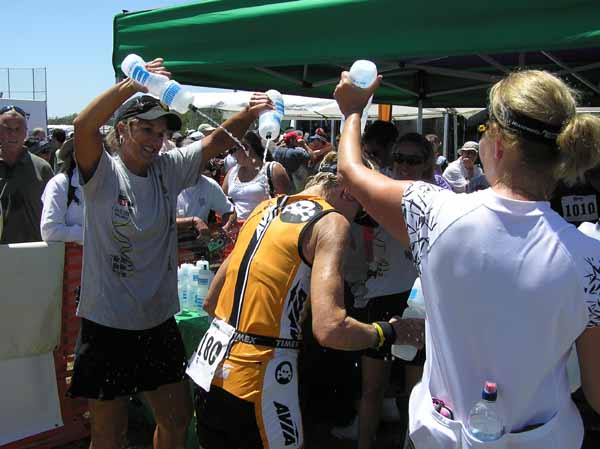 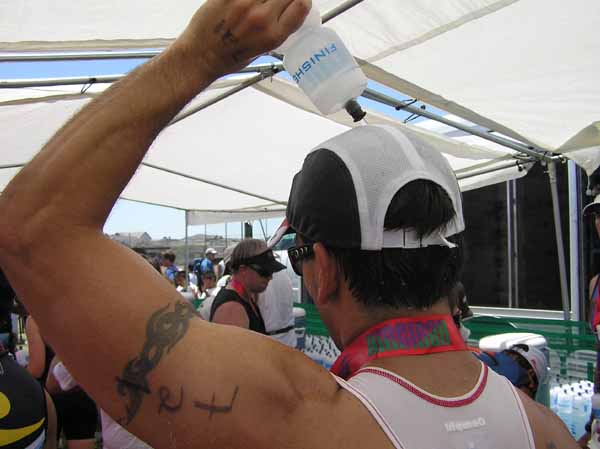 All photos © 2009 by Steeplechase Run, Inc./Lee Gruenfeld except where noted.