The Joie de Vivre of TriLaVie 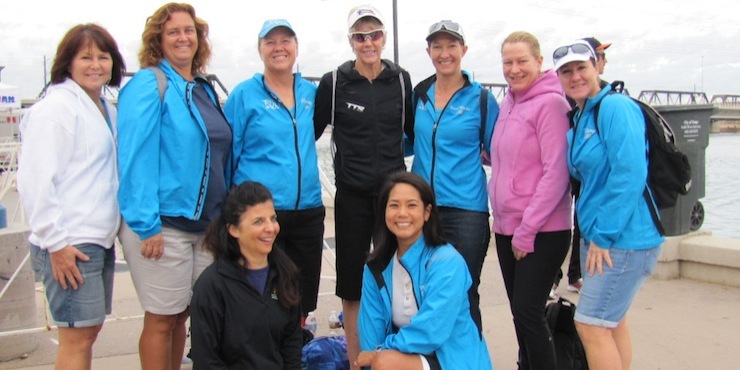 It's so not PC to focus on gender differences these days, all of us being equally-favored children of the Great Whatever, yada yada yada. But there are differences, and sometimes they matter, which is why we have two sets of public bathrooms, separate aisles at the local Rite-Aid, and very few men prowling the eyeliner displays at Bloomingdale's. We also don't have much head-to-head athletic competition between males and females.

What we don't see much of, though, are organizations dedicated to the unique needs of female amateur triathletes. Most of us have never given this much thought, but Martha Szufnarowski (rhymes with "shove her off-ski") has spent most of her waking hours over the past few years thinking of little else.

"Women approach competitive sports differently," she asserts. "They're competitive and want to do their best, but sports is usually not what defines them."

Pay attention here, because Martha isn't just spouting some vacuous talk-show philosophy; she knows what she's talking about, having put her ideas into practice and seen some serious results.

"Women want to socialize while they're working out," she goes on, "and they also want a place that's comfortable and safe, but not necessarily in a physical sense. They want to be able to vent occasionally about the challenges of doing triathlon along with everything else they do. They're usually on the front lines of managing families, and when they can bond with others who are in the same situation, there's a real sense of support, and of understanding." 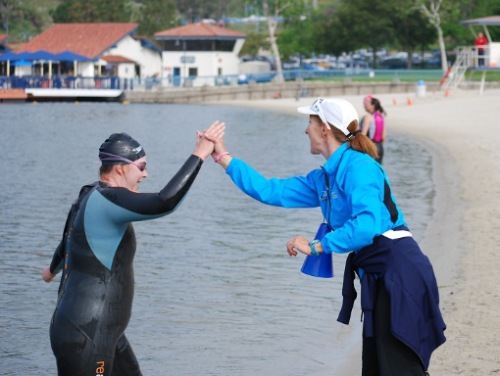 But if you're an athlete, what does any of this matter (he asks, naively)? "Because it elevates their performance," Martha answers. There is always psychic baggage that hinders performance, and anything you can do to relieve it helps. Tailoring that philosophy to the unique needs of women is something Martha is still figuring out, although what she's come up with so far is pretty impressive.

"As an example," she told me, "when women train in close proximity to men, it's only natural that at some point they're going to think, 'I can't do what he's doing. I'll never be able to do that.' It's a discouraging thought, and often a subconscious one, which makes it very difficult to deal with."

All this by way of answer to the first question I put to her: Why a women-only tri club?

Martha is the founder and spiritual core of TriLaVie, a brilliantly successful (and brilliantly named) organization that brings her ideas and experience to dozens of women in Orange County eager to take part in triathlon. Since my wife Cherie is the club's official IRONMAN coach, I've had the opportunity to witness first-hand the impact that it's had on dozens of women at all stages of their triathlon careers.

But it's about far more than training for races or meeting for Saturday rides. "I believe strongly in the triathlon lifestyle," Martha says, emphasizing that she's not referring to some romanticized, floating-around-in-the-ether kind of New Age gobbledygook. "We joke about 'life through triathlon' because it sounds like a mantra of the obsessed, but we're truly not, nor is TriLaVie a kaffee klatsch for bored housewives."

To Martha, delivering the triathlon lifestyle means providing the full gamut of services necessary to allow her members to do as well as they're capable of. TriLaVie provides top-quality coaching, well-vetted information on nutrition and health care, lessons on bike maintenance, even guidance on how to stay strong mentally. More importantly, though, there's a serious focus on the wider impact of participation.

"I'm fully convinced," Martha says, "that our lives are enhanced if we do this well. You can't let the sport consume your life, but do it right and it will make your life better and far more enjoyable."

She herself is an object lesson for that core belief. After scoring high school varsity letters in track, field hockey and basketball, she put competitive sports aside to get on with a family and a "more serious" career making documentaries about women in third world countries. She marveled at the participants in the Boston marathon who ran through her neighborhood but viewed them as quasi-aliens, rail-thin crazy people doing something that never even entered her imagination as a possibility for herself.

That all changed thirteen years ago when her husband got a major promotion and the family, including her two daughters aged four and five, moved to southern California.

"Things really were different out here," she recalls. "Fitness and sports were a routine part of so many people's lives. My daughters saw it, too, and it wasn't long before the whole family was taking part."

It wasn't easy. "I was out of shape, overweight and overwhelmed," she says, and joined the local YMCA. Soon, the competitive stirrings began.

Martha remembers how she got into triathlon. "I'd heard about it, but I thought it was only IRONMAN," she says, "and those people made marathoners look normal. But they had this 'triathlon for moms' program at the Y, and I discovered that there were a wide range of distances to choose from."

She started off slowly. Very slowly. "I swam, biked and ran, one sport per week, one day each. We're talking splashing around in the shallow end on Monday, spinning for twenty minutes on Wednesday and going for a walk on Friday. I figured it was a nice way to meet some other local moms, and not much more."

Eventually, she entered a mini-tri and (we've heard this so many times) was hooked. "It awakened the old high school athlete in me. I realize immediately that this was a way for me to compete in something other than the usual weekend jogathons."

Still, it was mostly an on-the-side lark…until she got hit with a malignant neck tumor a year after coming west. "It was devastating and life-changing. I wanted desperately to stay alive for my daughters, so I grabbed at anything and everything that was in my control. Triathlon was the path to doing that. I started eating correctly, working out more aggressively, and got serious about getting enough rest."

She looked around for more in-depth resources than the Y could provide but found only a few coaches available in Orange County and even fewer organized programs. "I participated in all of them, but they were male-focused, didn't include families and, most problematic for me, they didn't teach the why's of training and workouts. I find it difficult to rigorously follow schedules when I don't understand the underlying science."

So on her way to beating the cancer and becoming a triathlete, she decided that she wanted her life to be about coaching, but based on a very specific orientation. "I wanted to teach other women that there's a place in triathlon for them, and I wanted to do it do it by employing coaching principles that both respected and exploited their intelligence."

Around that time, in 2006, Martha got a call from an out-of-town-coach asking if she knew of any local women who could run a women's tri club in Orange County. She wasn't even nearly qualified at that time, but she jumped in with a coaching partner, gathered fifteen like-minded women who were utter newbies to tri, and got it started. "We all learned together, and had a great time doing it."

But she soon realized that it wasn't going in a direction that suited her. "I had ideas I really believe in, and the only reasonable course of action was for me to start my own club."

Thus was born TriLaVie in 2009, and to say it was a smashing success would be an understatement. "We've got about a hundred women now," Martha says proudly, "ages 25 through 71, and we're totally across the board in experience."

She spends most of her energy on TriLaVie, but also partners with two other coaches for "co-ed" athletics, including many friends and family of TriLaVie members. She also has a special program, Swim Velocity, that addresses the needs of men and women who want to do triathlons but either can't swim or are uncomfortable in open water.

I asked Martha what becoming part of the IRONMAN TriClub program has meant to TriLaVie. "We're absolutely thrilled with what [IRONMAN club director] Liz Kollar is doing," she answered. "The IRONMAN pursuit is a very individual one, so for women who want to be part of a club experience, part of something bigger, being attached to an international organization and making connections with so many other people has meant the world to our members. It's very clear that the IRONMAN organization cares deeply about the local club experience and highly values the participation of amateur women at all levels."

As a guest at the IRONMAN TriClub program's reception at IRONMAN Arizona, I had a chance to observe some of TriLaVie's half dozen attendees' interactions with members of other clubs. I mentioned to Martha that it looked very positive.

"It was awesome!" she gushed. "They got to meet a lot of other people and weren't a bit intimidated by any of it. They shared ideas, exchanged training and race tips…it was an incredible experience, the kind of thing that really induces more women to take part. Next year we're going to have twelve of our members in Arizona."

And how did this year's TriLaVie members do? I could answer that one myself, having watched all of them race and seen the unforgettable looks on their faces as they crossed the finish line. Here are two, Robin Littrell's and Lynn Couillard's, that tell you all you need to know: 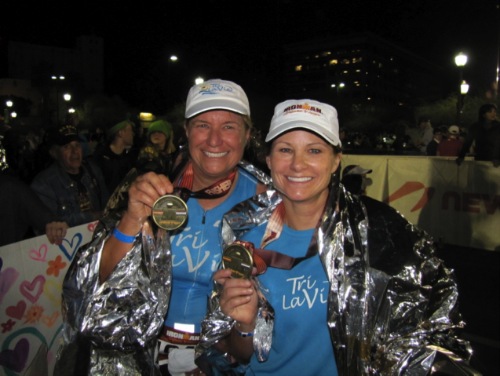