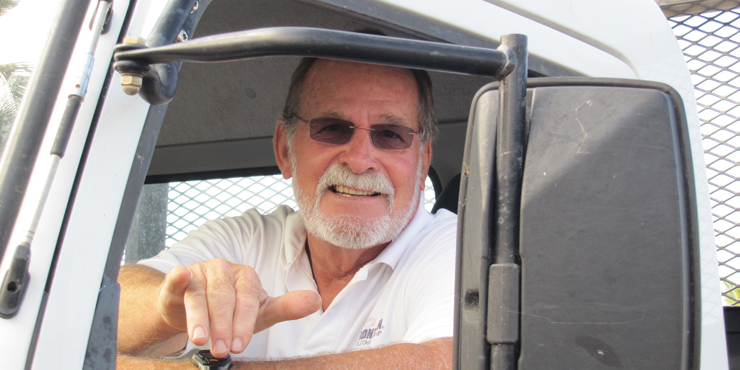 Finding out more about what makes this long-time member of the IRONMAN crew tick.

There was a new stop sign installed near our house in Palm Springs last year. It took six months to get approvals and permits, three months to survey the site and take soil samples, two weeks to prep the area, and then a crew of six worked for two days to get the sign up.

Jump cut to Kailua-Kona: Twenty years ago I looked out at the corner of Ali’i and Palani and saw a sleepy street casually idling next to the ocean, minding its own business. The next time I saw it that same corner looked as though it was ready to host the final leg of the Tour de France, complete with bleachers, a finishing arch, barrier fences, a media grandstand, massage and medical tents, and enough food, water and ice to service an invasion force. What makes this interesting is that the time between my first and second looks was less than 36 hours.

So the first thing I knew was that the City of Palm Springs wasn’t responsible for it. Then I wondered who was. Turned out to be a guy named Rocky Campbell.

Lee: Your responsibility is the start-finish area, right?

Rocky: There really isn’t, although there used to be. In the early days there was a lot of physical labor building stuff and tearing it down. Now it’s mostly about assembly and logistics, although we do build the finish line, the medal stand where athletes get their post-race photos taken, and some special-order structures for NBC and the like.

Lee: I did a piece on warehouse director Steve Butterfield last year. How does your job dovetail with his?

Rocky: During race week, Butter’s job is to get everything from the warehouse to the pier. Once his trucks get here, my crews take over and unload them. We distribute all the stuff and get the whole area set up.

Lee: What does that include?

Rocky: The massage area, medical tent, bike racks, all the barricade fencing – oh, yeah: all the supplies, too.

Lee: I’ve watched you guys work many times. Looks like utter chaos, and then all of a sudden everything’s ready, like a snow globe in reverse.

Rocky: It takes an awful lot of work and preparation to make it look easy. Thing is, there are no second chances. We’ve got agreements that dictate what we can and cannot do, and when, and this race starts on time on Saturday morning whether we’re ready or not.

Lee: So failure is not an option.

Rocky: If we fail, it’s going to affect the athletes, and that’s an unforgiveable sin at this event.

Lee: How long have you been doing this?

Lee: Starting to get the hang of it, are you?

Rocky: Somewhat. But every time I think we have it down pat, something changes or we figure out a better way.

Lee: Give me an example.

Rocky: We used to rent those bleachers. It was a royal pain getting them here, unloading and assembling them, just a big headache every year. We wanted to buy our own but where do you keep something like that? Turns out that there are these baseball diamonds just north of town near the old airport. So what we did was buy the bleachers and donate them for use at the baseball fields, with the proviso that we get to use them for a few days ever year. Worked out beautifully for everybody.

Lee: What a great idea.

Rocky: The biggest example of things changing is when the course itself changes. One year they decided to put T1 out at the old airport, another year it was behind the King K…

Rocky: Yes, but we figured out how to get more on the pier so we didn’t need to do that anymore. Those kinds of major venue changes require a lot planning, and there’s no way to test things out in advance. You have to rely on your experience and instinct. Another example: A couple years ago Diana [Bertsch, race director] had this idea for putting in a set of stairs that the swimmers could use to exit the water and get onto the pier.

Lee: I remember when that happened. What was the reason?

Rocky: Spectators couldn’t see the swimmers exiting over on the boat launch ramp and she thought they were missing out on an exciting part of the race. So one of my guys designed it, our crew built it, then we kept our fingers crossed that it would work.

Lee: It was a great touch. I’ve gotten some of my best race photos at that spot and spectators love it.

Rocky: Not all the ideas work out but that one was a winner.

Lee: And for all this you get paid, what…?

Lee: At least they’re not taxable. So why do you do it?

Rocky: A lot of reasons. It’s fun, I love working with Diana and the other directors, I’ve got great guys who work with me year after year, and I get to be a part of the best sporting event in the world.

Lee: You have an assistant director, don’t you?

Rocky: Yes, Gwen Hobbs. She worked for me for about five or six years, then one year bike director Dave Huerta go sick so she did that for one race, then she came back as my assistant. But I figured out how to stop her from leaving again.

Rocky: I married her last month.

Rocky: Yeah. She was my kind of woman.

Rocky: Only girl I ever dated who had her own cement mixer.

Lee: She’s also the only one in the family who’s an Ironman finisher.

Rocky: True. Last time was about ten years ago. She’d been hit by cars three times but was still the top Big Islander, and even beat the island men one year. And her son is the assistant bike director.

Lee: So how’d you get to Hawai’i? Didn’t you own a lumberyard on the island?

Rocky: I did. I served as communications officer aboard a Navy destroyer in Viet Nam during the height of that war. When I got out in 1970 my parents and grandparents were living in Hilo. A few people in the family were working at my grandfather’s koa [an exotic wood often called "Hawaiian mahogany"] mill there, but eventually my father went out on his own and opened a mom ‘n’ pop kind of lumber yard there. In 1972 I moved over to Kona and opened a branch.

Lee: Is it still operating?

Rocky: No, I retired. I still do some hauling but that comes to a halt every year when the race rolls around.

Lee: How’d you get involved in the race?

Rocky: The first or second time the race was held on the Big Island a friend of mine named Walt Stack, a teamster from Oakland, was in it. I manned an aid station from midnight to four a.m. and …

Lee: Hold it. Doesn’t the race end at midnight?

Rocky: It does now, but there were no cutoffs back then. Anyway, Walt usually came in around 7:00 a.m. the next day, and since he was about the only racer I ever saw, my job pretty much consisted of waiting for Walt.

Rocky: Not especially demanding, no. So one year I went down to help Mo Matthews, who was the swim director. I held a rope to help herd the swimmers through, then I brought down a couple of forklifts to help move things around. There was a construction director at the time and when she retired in 1988, I took over. Been at it ever since.

Lee: So when do you go into action?

Rocky: The week before the race I prep the area behind the King K for all the support trailers that are going to be stationed there, but I really don’t start hopping until the Sunday before the race. That’s when we pick up the bleachers because those have to be in place for the parade on Tuesday night. By sunup that morning they’re assembled and ready. Then, the morning after the parade, the first of several 40-foot trailers arrives at the pier. We offload them and assist the pier director, but we’re somewhat restricted because there’s usually a cruise ship in and we can’t use the pier until the last tender leaves at 6:00 that evening.

Lee: You’re just down tools for the day?

Rocky: No, we can do some things to get ready. We get the fencing up on the rock walls around the medical area and lay their carpeting out, get some fencing up around the pier, things like that.

Rocky: Yes. Thursday morning we help Dave on the pier and then at 10:00 AM Ali’i closes and we can really go to work. One of the 40-foot trailers comes down loaded up with the finish line and we get right to work putting that up. We used to let it go until Friday, but it was always a mad scramble to get it done on time so starting on Thursday gives us some breathing room. I’ve got a crew that does that every year and they’ve got it down to an art.

Lee: You’re working around a lot of activity.

Rocky: Bike check-in is on Friday so we like to be pretty much done by then, but we’re still adjusting barricades, building platforms for the medical and timing sites, etc. By this time we’ve got 40-footers coming in with bananas and oranges, tables from the expo after that closes, water and so on. There’s also an ice truck that comes onto the pier and stays there.

Lee: What do you do on race day?

Rocky: Unless something goes wrong, nothing. I go to bed early, around eight, because I’m back on the pier at 3:00 or 4:00 a.m. A great bunch of guys from Cleveland who’ve been with me for years start gathering stuff up at midnight, wrapping it and getting it onto pallets. By the time I get there they’ve got two truckloads ready to be hauled out. We go nonstop because we’re obligated to give the whole area back to the town by noon without any sign that a race even took place.

Lee: And you do all of that as a volunteer?

Rocky: What can I tell you? I love it. Made a lot of friends, too. I’ve helped out at Ironman events in Switzerland and Austria and those were great experiences. I was at the inaugural Austria Ironman, and that was wonderful. Two years later we went back and stayed at the race director’s mother’s house. Ironman is that kind of community.

Lee: So when are you going to step up and race in one?

Rocky: When you do. So I figure I’m pretty safe.