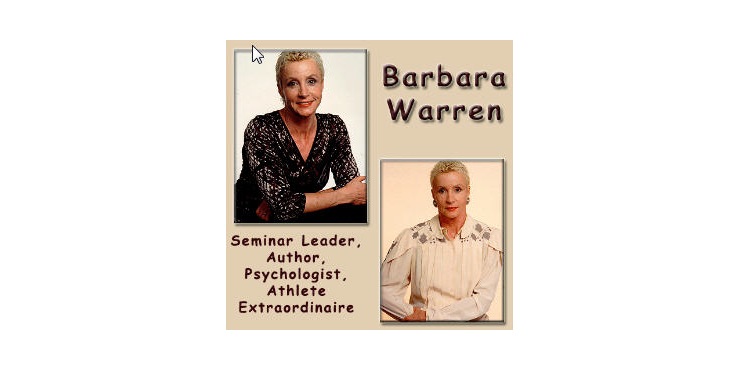 I'm not going to tick down a list of Barbara Warren's accomplishments or virtues. First of all there's not enough room, and many other people who knew her much better than Cherie or I did will see that it gets done properly. So just a little story.

We first met Barbara and her sister Angelika at Mike & Rob's "Most Excellent Triathlon" in 1992. They finished first and second, but both had already qualified for Kona so the slot rolled down to Cherie, leading to her very first Ironman. You couldn't miss Barbara and Angelika: From half a mile away either one of those strikingly beautiful ladies, their athletic physiques as trim as their haircuts, could turn heads, but the two of them in combination made you blink hard and look again.

We ran into them many times at races but it wasn't until 1995 that we really got to know them well, and not in a way that was fully planned. Cherie and the twins, along with Mary Ann Buxton, got together to compete as the first all-female masters relay team in the Furnace Creek 508, a 508-mile bicycle race across Death Valley. The plan was for four men, including Mary Ann's husband Bart and me, to provide support using two vehicles: our Ford Explorer and a motor home provided by the twins. Two women at a time would trade 20-minute bike sprints while the other two slept in the RV, and every four hours the teams would trade places. It was a great plan.

Two hours into the race the motor home broke down.

End of race, right? Not as far as Barbara was concerned. Matter of fact, I don't even remember any decision process taking place. We were all kind of standing around scratching ourselves, and after about three minutes of that Barbara jumped on her bike and began pedaling away. "You guys figure it out," she called back over her shoulder with a wave. "We have a race to ride."

Just like that, the question was no longer "Do we continue?" but "How?" While Bart and I strapped two bikes to the roof of the Explorer, the other two guys hauled as much food and water out of the RV as they could stuff into the cargo area and still leave room to throw one more bike on top. Then Cherie, Angelika and Mary Ann piled into the back seat and tried to get comfortable while Bart, the team coach and navigator, took the right front seat and I got behind the wheel. We said a quick goodbye to the remaining two guys who were tasked with getting the RV back in the game and took off after Barbara.

Owing to very steep hills, stiff winds and a noon start, the race took us through the night, the next day, and on until the wee hours of the second night. Five of us at a time were crammed into a small and uncomfortable space overflowing with coolers, clothes for both hot and cold conditions, cycling shoes, maps, spare parts and Lord knows what else. We didn't see a bathroom the entire time, sleep was fitful and short if it happened at all, there was no way to cook or even do simple food prep, and we had to follow close behind the cyclist-of-the-moment, a nerve-wracking task even in daylight when you're fresh, and all the time trying to remember that this was a competitive event, not a training ride.

As it happened, we had a blast. The tougher it got (like the two-way radio system going on the fritz), the more fun we had. And a large part of the reason for that was Barbara, whose unrelenting optimism and sunny disposition made it virtually impossible to let a negative thought intrude on the experience. There was nothing conscious or artificial about it, either, no speeches about overcoming obstacles or giving it the old college try or character building. Stuff came up; she handled it quietly and moved on. So the rest of us did, too.

Once when were wrestling with some balky brakes during a changeover and trying to stretch our aching backs at the same time, Barbara slapped on a pair of running shoes and headed off into the inky night. We finally picked her up about five miles down the road. Even when she stood up from behind the car during a roadside potty break to find me standing there with a video camera pointed at her, her immediate reaction was to laugh it off.

There was one episode that was ironic in retrospect. Coming out of Death Valley toward the town of Baker at about 3:00 am, Angelika was on the bike during a steep descent. The more daring of the twins, she was not only down on her aerobars but pedaling furiously. When I had her speed matched at a safe following distance I glanced at the speedometer. It read 55 mph. That's when I noticed Barbara leaning forward in the back seat, hands clasped tightly together in front of her face, anxious eyes glued on her sister. "I can't stand it when she does that," she said softly. I don't think she breathed again until Angelika was safely off the mountain.

We never got the motor home back. About two hours before the four girls rode side-by-side across the finish line, the radio crackled and the two other support guys finally showed up…in a rented, two-door Honda. It was Barbara who laughed the loudest at the sight and suggested that we finish the race using only the Explorer, which is just what we did.

I never would have believed that I could have enjoyed that experience. I'm ready to open a vein if the line at the grocery store is too long. But there was something about Barbara, as well as her sister, that would have made any sort of complaint wildly out of place and inappropriate. Once I figured that out and settled into just handling the situation, two things happened. The first is that I had an experience I'll never forget while learning some very important lessons about life. And the second is that I fell in love with both of those amazing women.

To read Fran Arfaras' profile of Barbara Warren from 2003, click