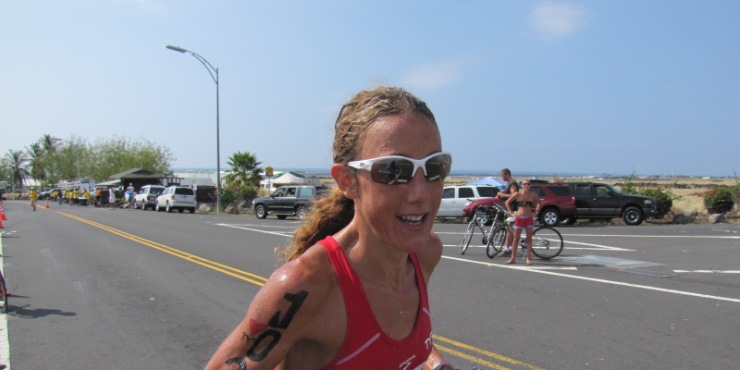 We’ve heard it a thousand times: "It’s all about the run." And like most tired clichés, it’s true. Chrissie Wellington never gets off the bike in anything but first place. So when she came out of T2 in fifth, twenty-two minutes behind Julie Dibens, the Sports Book at Caesar’s Palace called over to B of A for more cash to cover the record losses they were about to suffer. Then the British Blowtorch started running. To make a short story even shorter, after Julie dropped out and just as new frontrunner Caroline hit the Lab, she was passed by She-who-must-not-be-named, and barreling down the Queen K not far behind was the best runner in the field, 2010 champ Mirinda Carfrae, who had been behind Chrissie off the bike. Watching Mirinda run is like watching a Ferrari, whereas Chrissie is more like a runaway freight train with no brakes. The Ferrari actually outran the train, by 34 seconds, but even combined with Mirinda’s four-minute lead off the swim, it wasn’t enough to overcome Chrissie’s eight-minute bike advantage. Back on Ali’i the Great One’s 109-second margin of victory represented one of the most spectacular come-from-behind wins in recent memory.

Craig Alexander emerged from T2 in the middle of a six-pack that included Dirk Bockel, Andi Boecherer, Luke McKenzie, Maik Twelsiek and Andreas Raelert, all of whom were at least five minutes behind Chris Lieto.

Then he started running. Had you seen Craig at the Hot Corner your first thought would have been, No way he keeps that up for another sixteen miles. But that’s only if you’ve never seen him run before. If you have, your thought is, Let’s go find a good cheeseburger somewhere until he gets back…and make it rare because there might not be enough time.

Like Chrissie, Craig had only the second fastest run of the day, by 95 seconds, but Pete Jacobs had been seven minutes slower on the bike. All Craig had to do was maintain his pace to capture the crown, but somewhere along the road someone must have pulled out a calculator and shouted the results to him: Uh, pick it up a tad, mate, and you can set a new course record. Which he did, and did.

It was a stellar day in World Championship history. Here are a few photos to jog your memory if you were there, or implant a few if you wish you had been.