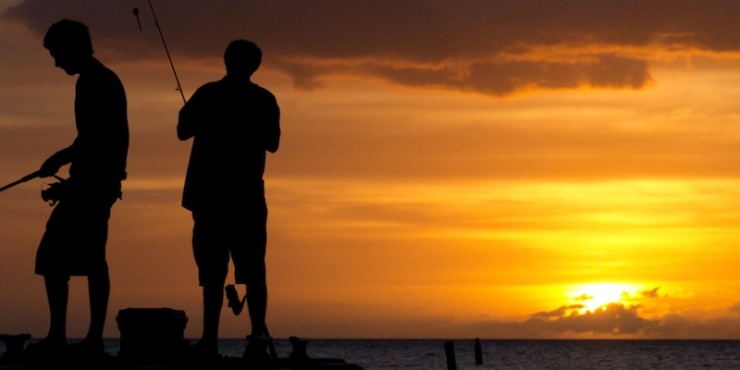 Lee Gruenfeld recaps the day of racing in Honu with entertaining words and photos.

A few weeks ago I wrote from Ironman 70.3 St. Croix that, after every race I cover, I always say that that location was the greatest venue on the circuit, but that even though I was now saying the same thing about St. Croix, this time I really, really meant it. Seriously.

Except that, seriously, now I’m at the Ironman 70.3 Hawai’i, still affectionately known as Honu, and this time, no BS, no kidding, I swear to Pele I really mean it, this is the greatest venue on the circuit, bar none.

Why? First, it’s in Hawai’i. Yes, Hawai’i is a cliché: beautiful beaches, awe-inspiring volcanic landscape, friendly locals, yada yada yada. Except, like all clichés, this one is true. I’ve been here dozens of times and the place never fails to knock me back on my heels.

Second, race HQ, including T2 and the finish, are at the Fairmont Orchid Hotel. I could write a book about why this place is such a stunner, but instead let me give you the one picture worth a thousand words, of the first thing you see when you walk through the lobby: 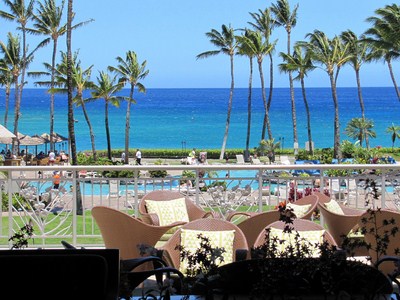 ‘Nuff said. Yeah, sure, Hawai’i is the most remote chunk of land on Earth, the closest continent being a three-movie flight away, but if you opt to make the trip and race Honu and decide afterward that it wasn’t worth it, my editor Kevin Mackinnon will pay for your entire stay out of his own pocket and throw in a Mercedes 560 SL for good measure. That’s how strongly I feel about it. [Ed. Note: Since Lee has, from what I can tell, about 13 best-selling books to my two, I’ll let him pick up your tab – but I think we’re both probably safe on that one.]

But boy, you should’a been here last Saturday. They’re going to be talking about this one for years, and not just about the extremes, but the contrasts. The winds were so strong that people were looking skyward half-expecting to see Dorothy and Auntie Em whirling around overhead. Top age group finisher Chris Hauth told the finish line crowd that at times he was pumping away with all he had and barely moving. You hear that kind of thing all the time in heavy wind conditions, but Chris was talking about the run, not the bike. Here’s what the start area at Hapuna Beach looked like the day before the race: 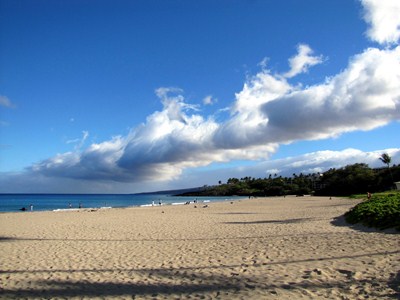 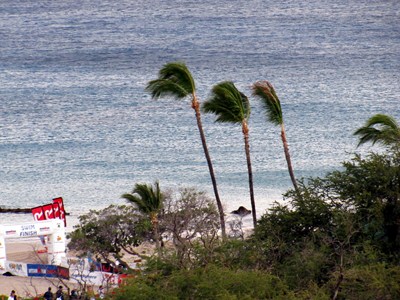 And yet, on a day when the most frequently heard word in the recovery area was "survival," both the male and female course records were broken. Linsey Corbin ran a brilliant race to a four-minute margin of victory, but the spotlight shone most intently on Lance Armstrong. Whatever hesitancy might have attended to according him a full measure of credibility in this sport was utterly annihilated as he did the same to both the field and the record. And it wasn’t all about the bike, either. He was a scant six seconds out of first place coming out of the water behind leader Timothy Marr and of course turned in the fastest bike of the day, but only by three minutes vs. Chris Lieto. The question buzzing among the spectators was, Who’s going to run down Lance? The answer, as it turned out, was Nobody. History’s greatest endurance athlete held his T2 lead all the way to the finish line, where he told race announce Greg Welsh that he thought the run was "hard."

Really. Well. The Tour de France is hard. Apparently that’s the way this guy likes it, because it seems that the harder it is, the better he does.

Kind of makes you wonder what’s going to happen when he hits Kona in October.

Timothy Marr, the Triathlete From the Black Lagoon, rises out of the waves: 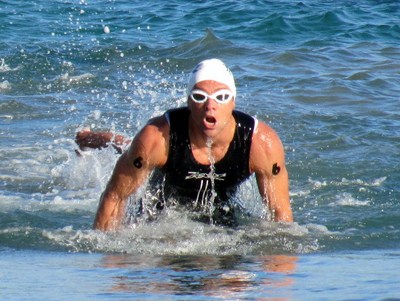 Close on his heels, that cycling guy, whatsizname: 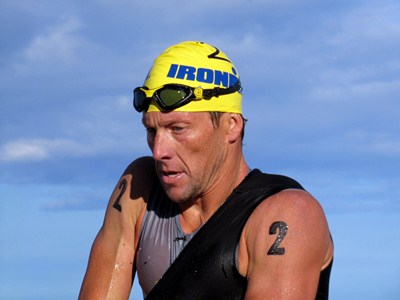 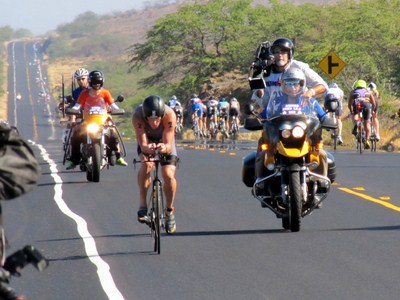 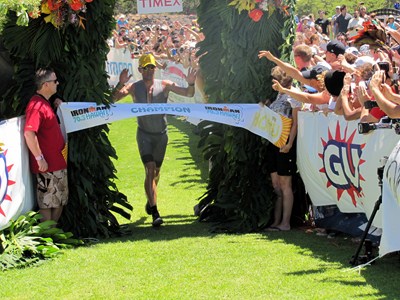 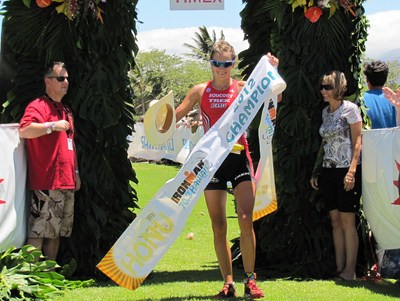 While all the attention naturally clustered around the biggest sports star ever to grace an Ironman course, there was a lot more going on throughout the day. Here are a few snaps to help you either relive the experience or try to get a feel for what it was like for the participants and spectators.

Bike check-in on Friday. I figure there’s about $8 million worth of hardware in the corral. 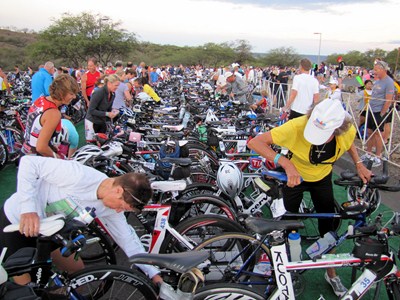 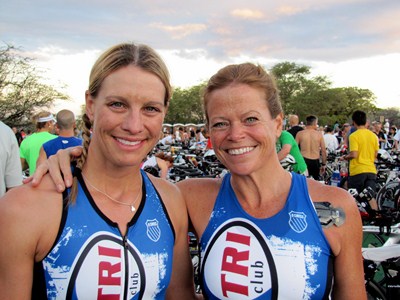 The Purple Gang occupies the beach. 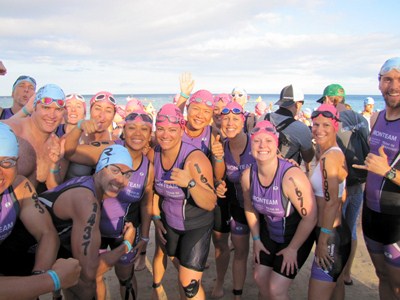 An Ironman mass start is kind of like 1,600 tennis balls in a washing machine but without the Zen-like calm. 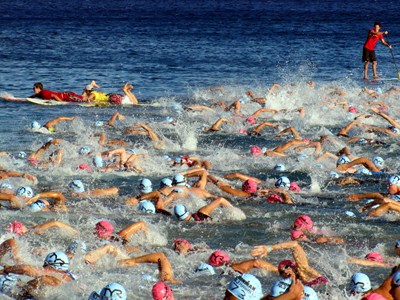 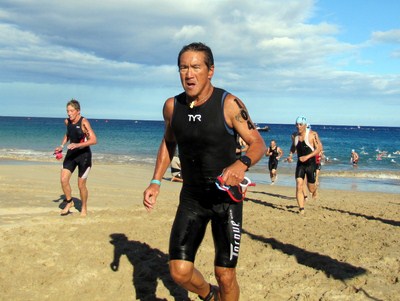 The loneliness of the long-distance triathlete. Beth Walsh of Encinitas, CA. 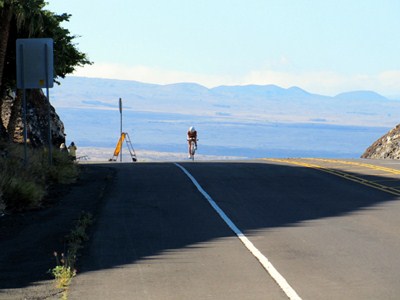 Hillary Biscay of Tuscon, AZ. This is only one of about 800 Ironman races she does every year. 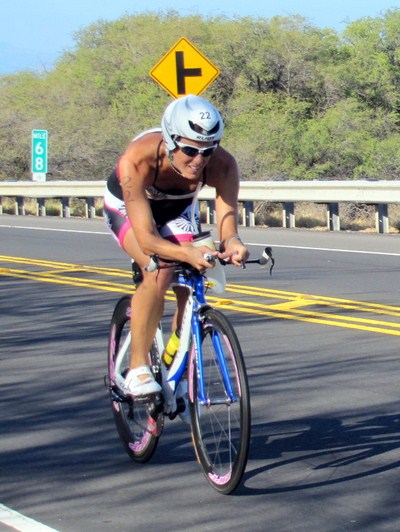 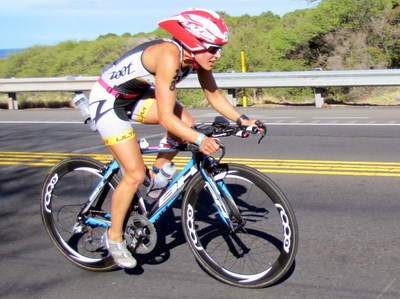 Waiting for their guy to come into T2 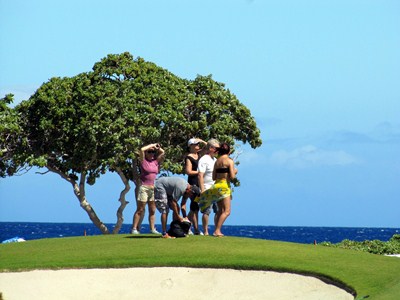 Jim Lubinski of Santa Monica, CA. "Where’s that Armstrong guy? Is he ahead of me?" 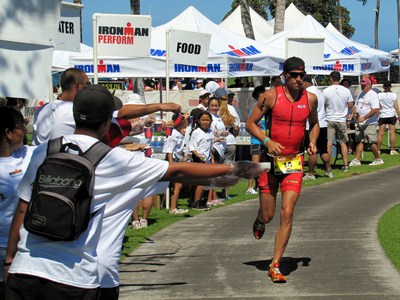 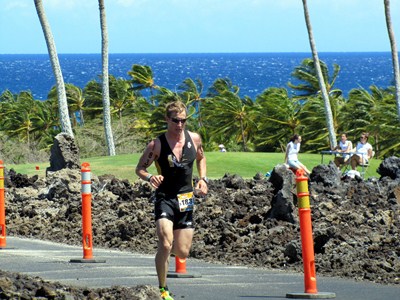 "Say, what’s a guy gotta do to get qualified around here?" Denis Honeychurch of Santa Monica, CA, after placing third in 65-69. 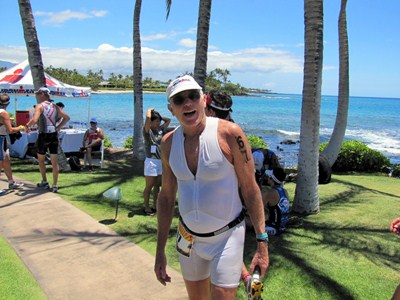 "Come in first," answers Cullen Goodyear (60-64) of North Vancouver, BC, Canada…who did. 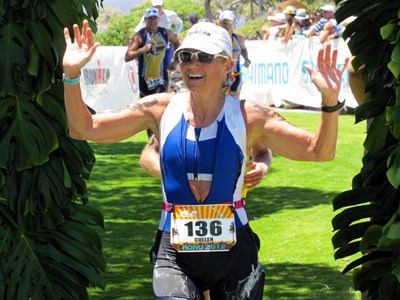 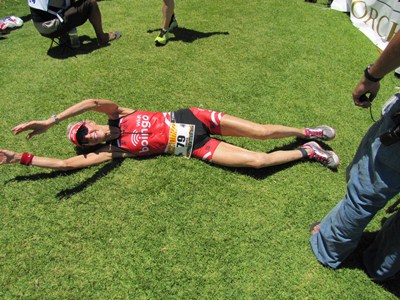 Lance Armstrong celebrating his impressive victory, as women’s champion Linsey Corbin looks on. A splendid times was had by all! 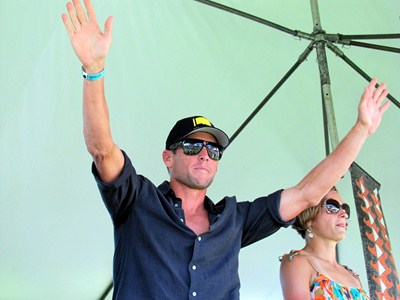