Four Guys and an IRONMAN: The Lawaetz Brothers Do Kona 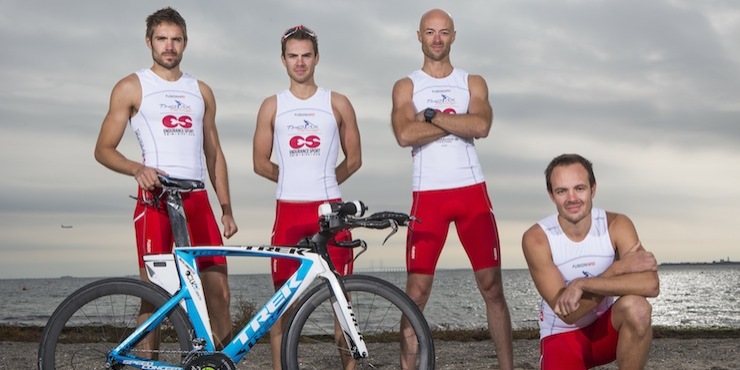 A qualification story that could spark a revolution in the way future competitors train.

Remember when you were a kid and you and some friends made solemn vows to become astronauts or Olympians or millionaires or maybe just go to the same college?

Need I ask how the follow-through went?

In 2011, four guys named Lawaetz (pronounced "Levitz") agreed that they would all qualify for the GoPro IRONMAN World Championship in two years. That would be a pretty bold aspiration for anybody. For four brothers, it was ridiculous, one of those silly goals usually forgotten by dinner time.

But these were not ordinary siblings idly tossing wishes and dreams around. These were serious, dedicated guys and they weren’t kidding around. Now, you would think that four serious, dedicated guys, having set themselves such an incredibly ambitious goal, would have spent the next two years racking up enough miles to go to the moon and back, stopping at home only long enough to grab some fresh shorts and make sure the rest of the family remembered what they looked like.

Except these four guys happened to be a full-time physiotherapy student, two medical students and a corporate CEO. There were girlfriends and children, too, and none of the four had any intention of abandoning their careers or their families.

Which meant that they were only going to spend nine or ten hours a week training. I know triathletes who spend that many hours training in one day. Maybe they’d ratchet up to a few long rides in the weeks prior to the race, but that’s as far as they were willing to go.

You’d expect is that come IRONMAN Copenhagen this past August, they’d all collapse early on the bike leg and end up in the med tent, hopes and dreams shattered, only to spend the rest of their lives bitterly regretting their foolishness.

Shows how much you know.

"We’re all driven," says oldest brother Thomas, "but none of us wants to become fanatical. Therefore, we needed to find a way to achieve balance between triathlon and the other parts of our lives."

Thomas, 32, is CEO of Danish Vein Centres, founded by vascular surgeon and patriarch of the clan, Lars. It’s Denmark’s largest facility for the treatment of varicose veins, and compromising his obligations to the family business was simply not an option for Thomas.

"Three of us use a coach," he says, "and we made clear from the outset that we only had so much time to devote. It was quality over quantity, and while we were willing to pour everything we could into the hours we had, none of us wanted to do long rides just for the sake of putting in miles."

Martin, 30, a medical student and the scientist of the group, has delved into the physiology of extreme training. He’s self-coached, but uses the same principles as his brothers, and trains with them as often as he can.

"When you put in fewer hours than convention dictates," he says, "you need to make sure those hours are very intense. Raising the aerobic threshold and increasing VO2 max are key to reducing the stress of an Ironman. We do occasional longer rides, but even when they’re over three hours we try to maintain race pace throughout."

"We push each other constantly," says Anders, 25, a full-time physiotherapy student. "That makes it fun, and if it wasn’t fun, I couldn’t do it."

"Fun" is the reason Anders is the only one of the four who trains outside in winter.  "Trainers are just too boring. There’s not a lot of snow here, but the days are very short. I live near an industrial area where there are a few miles of well-lit streets, so I have one route I do repeatedly."

In 2008 a friend dared him to do a 300 km (181 mile) bike race. Anders, who hadn’t done any training, asked him when the race was. "Tomorrow" came the answer. "No problem," said Anders. By the time it was over, he had decided to become a cyclist.

"I got good pretty quickly," he says, "but then I kind of plateaued and started getting tired of it." When brothers Jonathan and Martin decided to try an full-distance triathlon in Roth in 2011, he signed up with them. "I got hooked. It was just what I was looking for. It’s such a bigger event and the payback is much bigger, too."

Of course, all that cycling experience comes in handy. "But I have to be careful," Anders says. "It takes a lot of discipline for me not to get carried away on the bike and burn myself out." His solution was to get a power meter and set a plan for how to use it. "Now, instead of relying on something as unreliable as how I feel moment to moment, I can do it ‘by the numbers’ and be confident that I’ll have enough left for the run."

Jonathan, 23, a medical student, had done marathons, long bike races and cross-country skiing, but after his experience at the Ironman distance, there was no looking back. He did that event in 11:30 and two years later broke nine hours.

"I love to push myself," he says, "to get to a crisis point and prove to myself that I can get through it."

Had he ever not gotten through? "I was once in a 300 km bicycle race and something was wrong with the chain. I might have fixed it, but I’d been dropped and never would have caught back up and so would have been alone for eight hours. I thought, No, I don’t want to do that, so I quit."

To his everlasting regret. "Not only did my brothers finish, but my mother did, too. It took her over fifteen hours and she was alone the whole time!"

"I feel strongly that the sport improves your life if you keep it in perspective and don’t get carried away," Martin asserts. He’s a veteran of five Ironman races, including Nice and Copenhagen this year, along with a number of 70.3s and some shorter distance. "For me it’s the mental aspect. That voice inside telling you to stop or quit? What you have to do to make it shut up, those are the same tools you use to get through a long exam or workday."

Jonathan agrees. "I got two flats in Copenhagen," he recalls. "It would have been easy to panic or become discouraged. I tried to stay calm and just solve the problem. I went twenty minutes over my expected time but I still qualified, and that was the goal."

"You may have been calm," Thomas says. "The rest of us were going crazy at the finish line waiting for you."

They’re a tough lot, these Lawaetz’s. Last year at IRONMAN Austria Thomas had too much cola and too little salt and water. He woke up in the med tent after collapsing from dehydration and took four bags of saline before they finally let him go. The next day he signed up for Copenhagen.

Jonathan is one of the few triathletes I’ve ever met – wait: he’s the only triathlete I’ve ever met – who thrives on cycling in the rain. He’s worried about the heat, because "I do much better in cooler conditions, like most people, but cold and wet is ideal for me." So if it’s pouring, as it usually is, between the Kawaihae cutoff and Hawi, look for the cyclist who’s smiling and while hammering the hill.

An interesting part of their quality-over-quantity orientation is an almost casual dismissiveness about the swim. "It has the least payback for the training investment," Thomas says. "I know I’m going to swim eight or ten minutes behind my competition but it doesn’t make much difference as far as overall time is concerned." He believes that all the hours it would take to buy a few minutes in the water are much better spent improving the bike and run. Mathematically, this makes perfect sense: A 4 to 5 percent improvement over a four-plus-hour bike or three-plus-hour run makes a much bigger difference than it does over an hour-long swim.

All are agreed that their biggest advantage is each other. "We inspire each other," says Martin. "If I don’t think I can do something, and then one of my brothers does it, that’s all the proof I need that I can, too."

Thomas sees no inconsistency between competing with and supporting his brothers. "We push each other constantly, but it has more to do with each becoming as good as he can than trying to beat the others. Even in the middle of a race we can do both at the same time. One is dragging a little, maybe I’ll run a few steps with him, and once I see he’s okay…you’re on your own, brother!"

I asked if any of them had ever thought of turning pro. While there was some curiosity as to how well they might perform if they stepped up their training to a pro level, there wasn’t a high level of enthusiasm over the prospect.

"I’d have to quit my studies," Jonathan says, "and that’s not something I would do. Education is far more important to me."

Anders wasn’t sure that it would be a realistic possibility even if it was something he wanted. "Truthfully, I’m not sure I could train any harder than I already do. Fighting tedium is difficult enough and I don’t think I could maintain the required level of intensity over longer durations."

And how does the family feel about all of this?

"Our parents were skeptical," Thomas admits. "But after they saw us race in Roth? Dad said he would have done IRONMAN himself had it been available in his younger years."

"And both Mom and Dad did the bike leg of the relay in Copenhagen when that was still an option," Jonathan adds, "not to mention Mom’s 300 km bike race."

Mom and Dad are coming to Kona, too, as are girlfriends, children, and Thomas’s new bride: They were married on September 21.

My last question: What’s the betting line in Kona?

"Very difficult to predict," Martin says. "We’re all humbled by the weather and are prepared to adjust as conditions demand. Otherwise, though, we’re remarkably similar in ability."

"He beat me by ten seconds in Copenhagen," Thomas says of Martin, now in the same age group as Thomas.

"Jonathan will probably get out of the water first," Martin continues, "and we all bike about the same…"

"But you’re a little faster on the run and will catch up," Thomas tells him.

"Yes, like I did in Copenhagen and then only got a few meters past you!"

The brothers have a lot of confidence, but I detected no arrogance or swagger.

"In terms of goals and expectations," Jonathan says, "there’s really no way we can set expected times for ourselves. None of us has ever been to Hawaii, the weather is too unpredictable…"

"And the course is more difficult than we’re used to," Martin adds. "That said, any one of us would be thrilled with a top ten finish, and my own dream for Kona is to go sub-nine!"

"I want to feel that my results match my abilities," Anders says. "I’m pretty nervous about how the conditions will affect me, so if I feel I did the best race I could and I place in the top fifteen, I’ll be happy."

Martin is right: Making predictions in Kona is very difficult. But I’d be very surprised if the Lawaetz boys didn’t make a number of podium appearances at the awards banquet. And it’s a sure bet that they’re going to captivate the crowd. For your reference if you plan to follow the race on October 12, here are their age group finish places and times from IRONMAN Copenhagen on August 18: