A great day of racing in Tempe

Tempe.
Say it soft and it sounds like…Tempe.
It may not have the scenic grandeur of Lake Placid or the tropical charm of St. Croix or the exotic mystique of Kona - think Cleveland without the awesome views - but Ford Ironman Arizona has quickly gained a reputation as perhaps the most spectator-friendly course on the circuit.
It sure as heck wasn't friendly to the athletes.

Ironman is supposed to be hard. People like that it's hard.

It just shouldn't be that hard.

As forecasts of hot weather grew more alarming in the days preceding the race, Jonathan Toker of "Salt Stick" couldn't unpack boxes of his patented cramp-fighting product fast enough to supply the demand at the expo. But at least the local television meteorologists were promising calm conditions rather than a repeat of last year's ferocious winds.

Memo to the weather department: "How'd that work out for you guys?"

Temperatures in the mid-90s and enervating winds on the outbound leg of the three-loop bike course conspired to plant this season's opening event firmly into the record books as having the third highest dropout rate in Ironman history. Nearly 18% of the field failed to make it to the finish line. Some were SAG'd in, having discovered that there were some times when, no matter far how down you reach, there's just nothing there. Others made it back to T2 on their own power and, in a striking demonstration of how much of a mental game Ironman is, simply decided to let Mother Nature win this one, and packed it in.

For those who carried on, and for those who watched, it was a wonderful day. The pro men put on a stunning display of competitive fire, with only 73 seconds separating the first and fourth finishers. Winner Jozsef Major of Hungary endeared himself to the crowd at the awards banquet the next morning by giving the shortest victory speech in the sport's history. Incredibly, the female winner, Erika Csomor, lives in the same tiny Hungarian town as Major, and will doubtless exercise bragging rights when the two return home, having racked up an 11-minute margin of victory over powerhouse Michellie Jones and nearly 18 minutes on defending champion Heather Gollnick.

There was only one course record set on this difficult day and — must brag here, sorry — it was turned in by none other than me bride, Cherie Gruenfeld, who lopped 29 minutes off the course record she already held in female 60-64 with a 12:51 performance.

Best performance of the day, in my humble op? (Aside from, you know…hers) David Kahn, a student from Port Jefferson, NY. First out of the water at 47 minutes flat and tenth place overall at 9:06:09. Not bad for a 24-year old age grouper.

Those who DNF'd and are determined to come back and take care of business should have an easier time of it on their next try. Starting later this year, IM-AZ will be held in November from now on. We're told that temperatures are certain to be lower (so everybody who raced the SOMA Half last November on a sweltering 95-degree day must have been making it up) but as for the winds? Stay tuned.

Herewith a few snaps of the day.

Photos (all photos by Lee Gruenfeld):

The southeast entrance to the race site also doubles as the entry-exit point for the bike leg.

Perennial powerhouse and Olympic silver medalist Michellie Jones with her coach Paula Newby-Fraser, one of the greatest athletes of the twentieth century.

A bird's eye from the Mill Street Bridge

Did we say "spectator friendly?" You can walk the entire swim course.

A most civilized way to exit the water

We've heard that volunteers have to pay to get this job.

The Beeline Highway stretch of the bike leg. Ten miles out, ten miles back, and when the winds are blowing, the outbound trip can take twice as long as the return.

Our favorite jersey of the day, sported by Mike Ferrell of Annapolis, MD.

These kids from Cherie Gruenfeld's Exceeding Expectations program were supposed to be in Arizona watching "The Coach" race, but decided to take over Aid Station #2 instead.

A Phoenix-based tri club got shanghaied into volunteering right in the middle of a toga party.

This is the site that greeted runners on the west loop of the figure-eight course at sunset as they got ready to turn uphill for the climb to the Mill Street Bridge.

No sense pretending that you really only wanted to do "one Ironman." Or did you think your family put up with all your training just for a trip to Tempe?

They have the best view in the house as racers cover the final fifty meters.

Just to make sure everyone got enough sun, the award ceremony was an outdoor affair. At least it was by the lake. (You all know what a difference that made on race day.)

A splendid time was had by most! 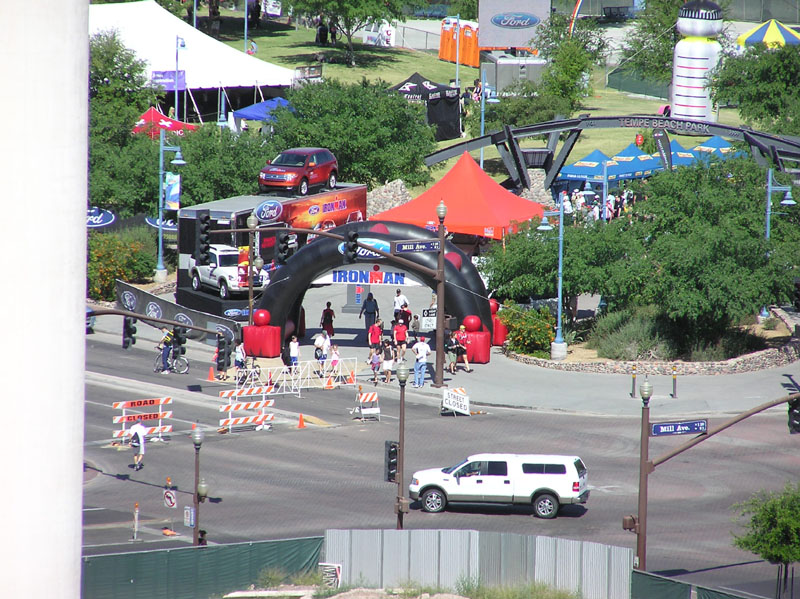 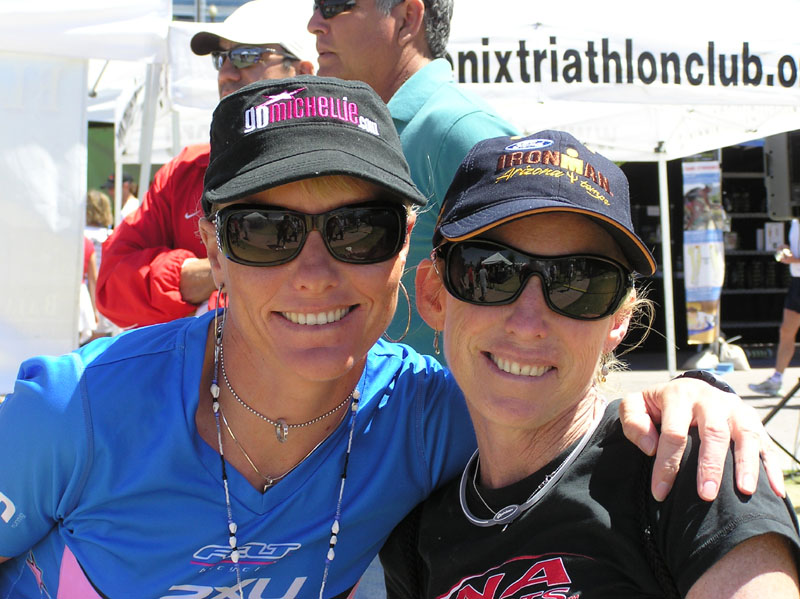 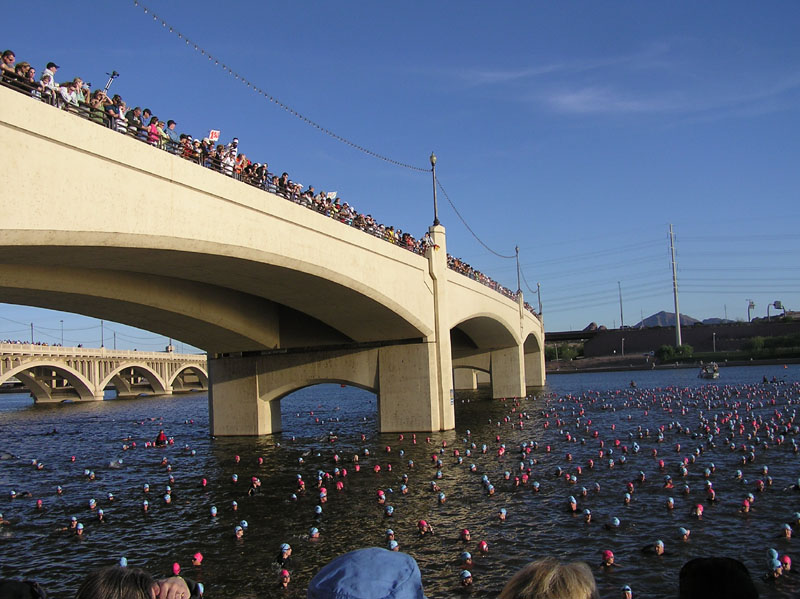 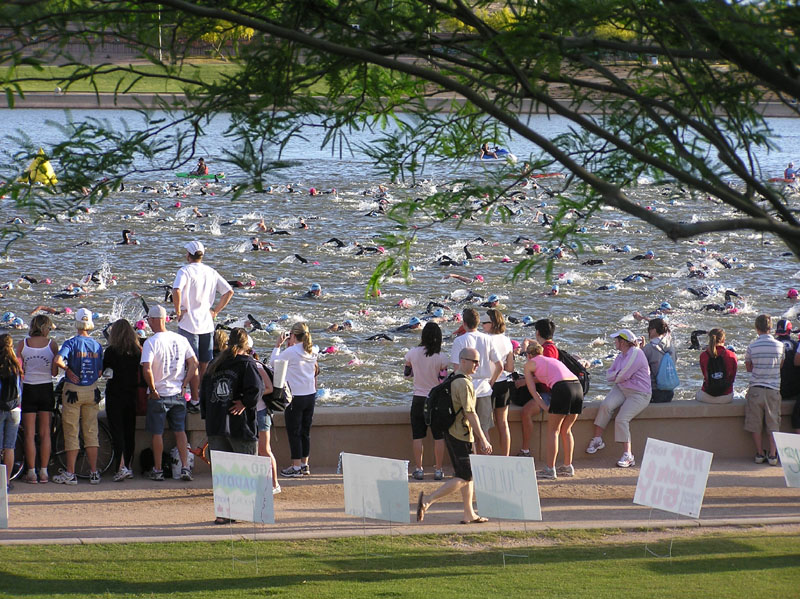 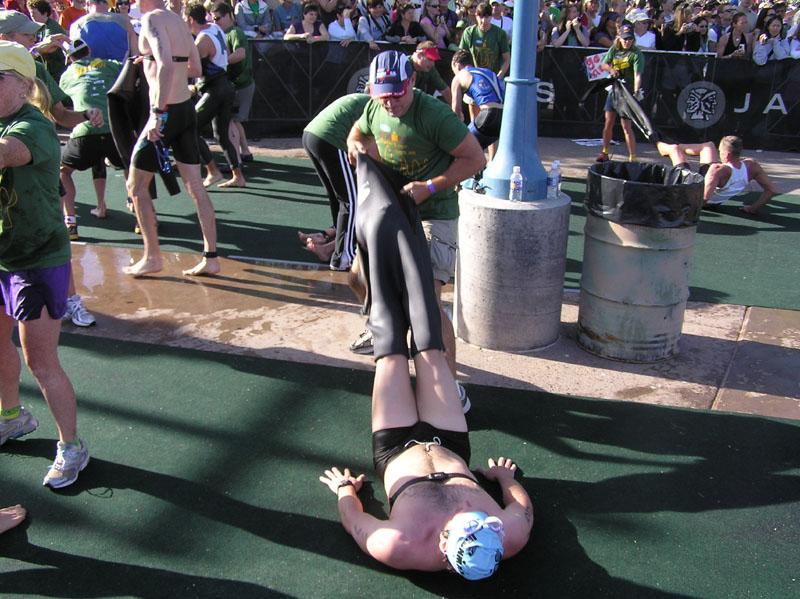 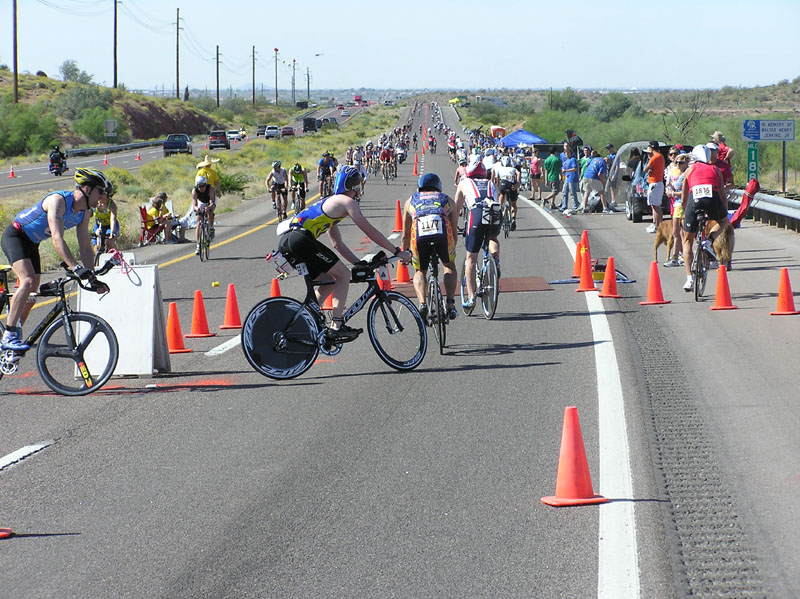 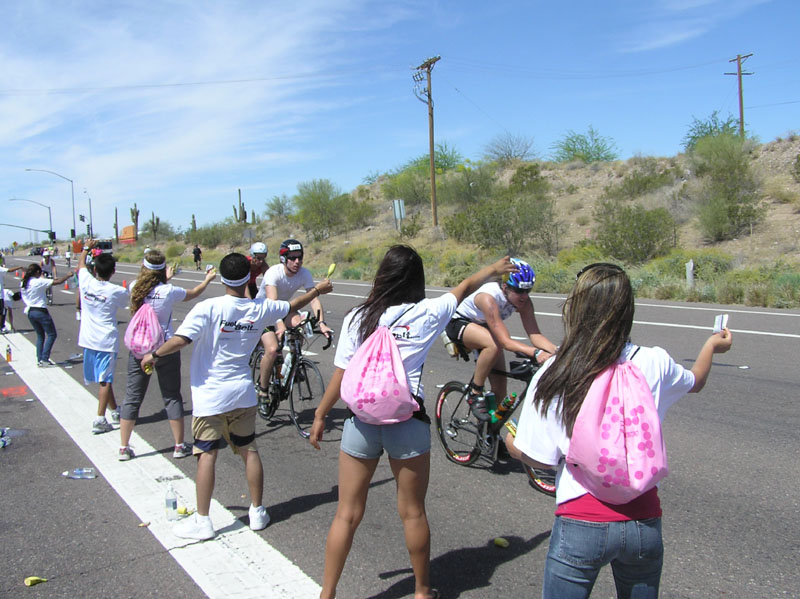 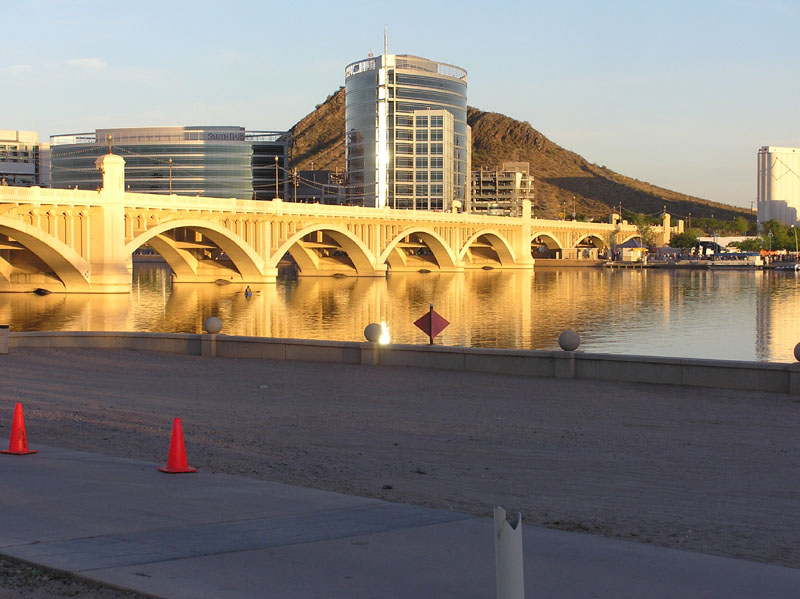 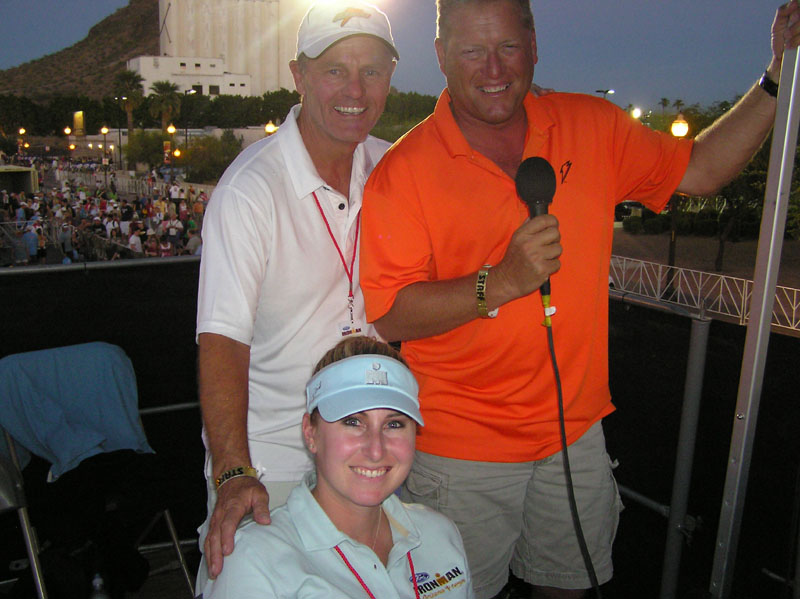 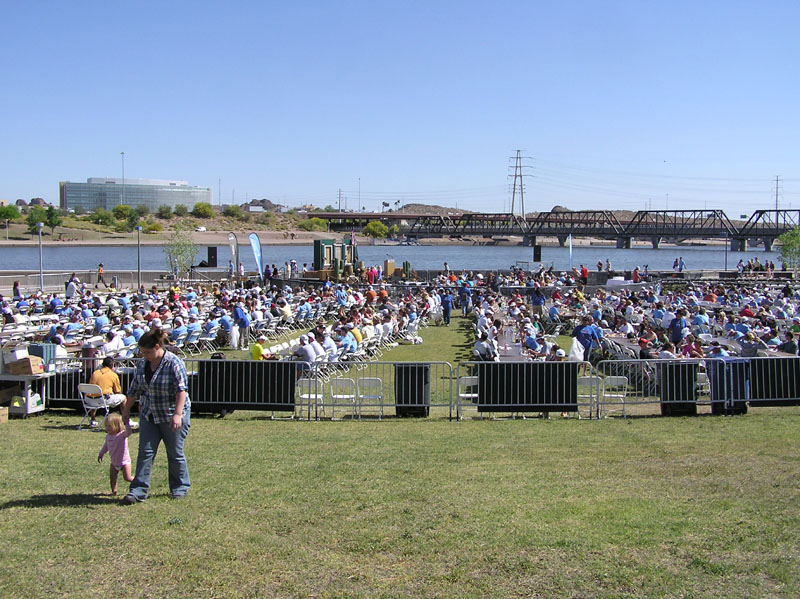 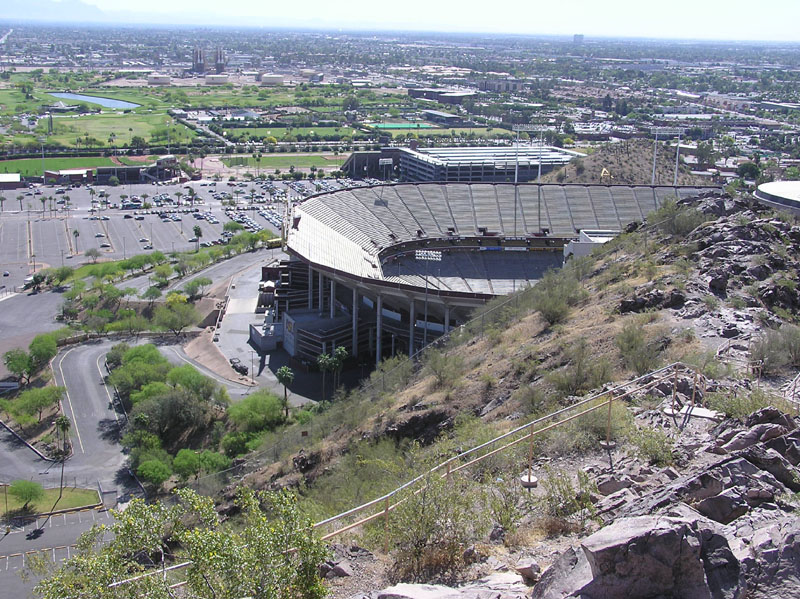 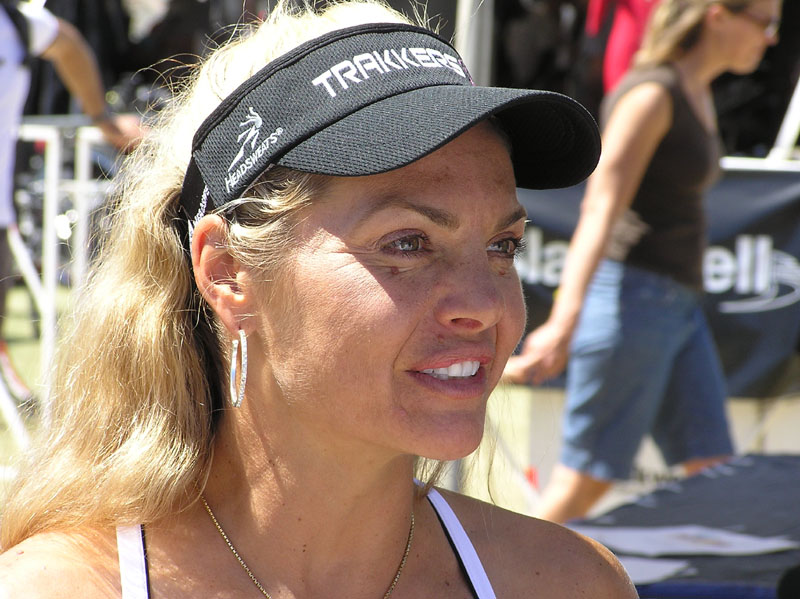 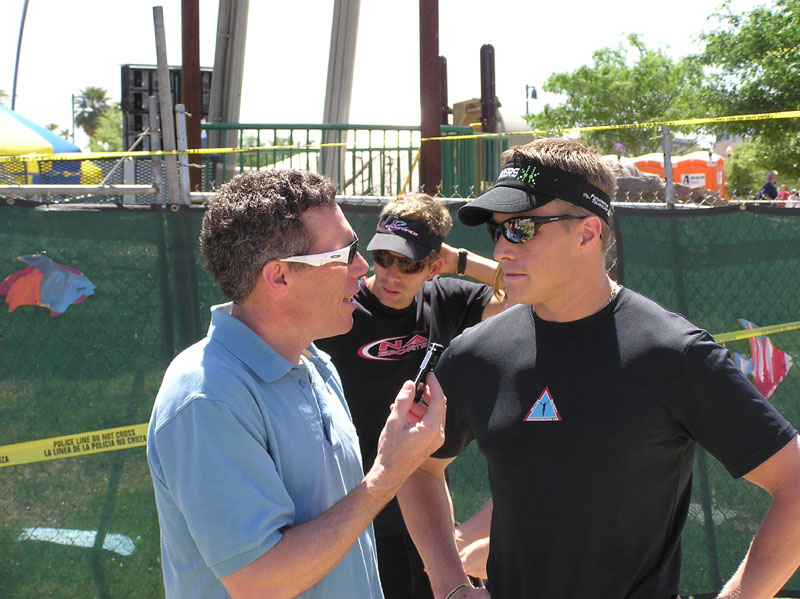 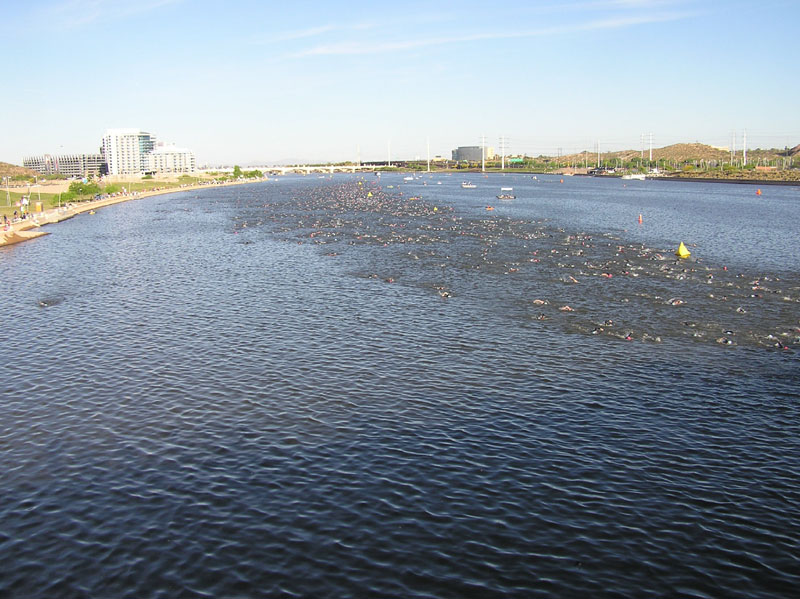 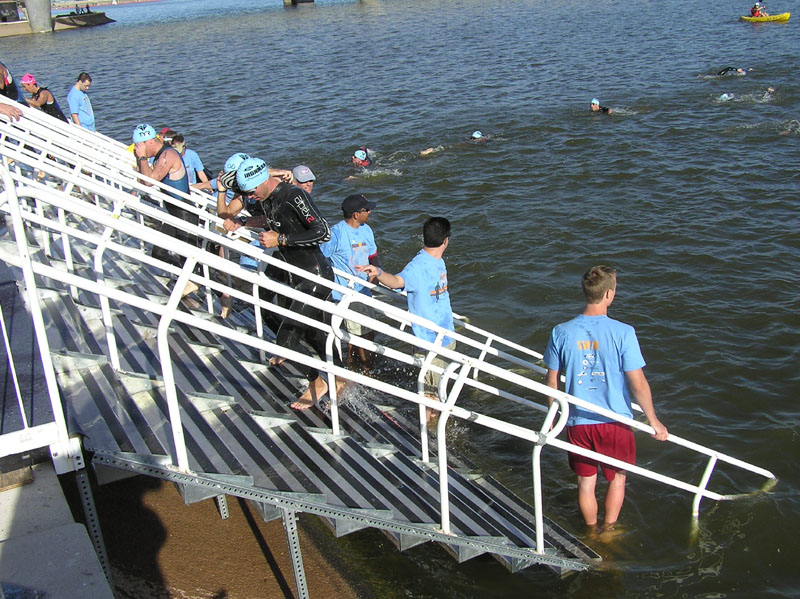 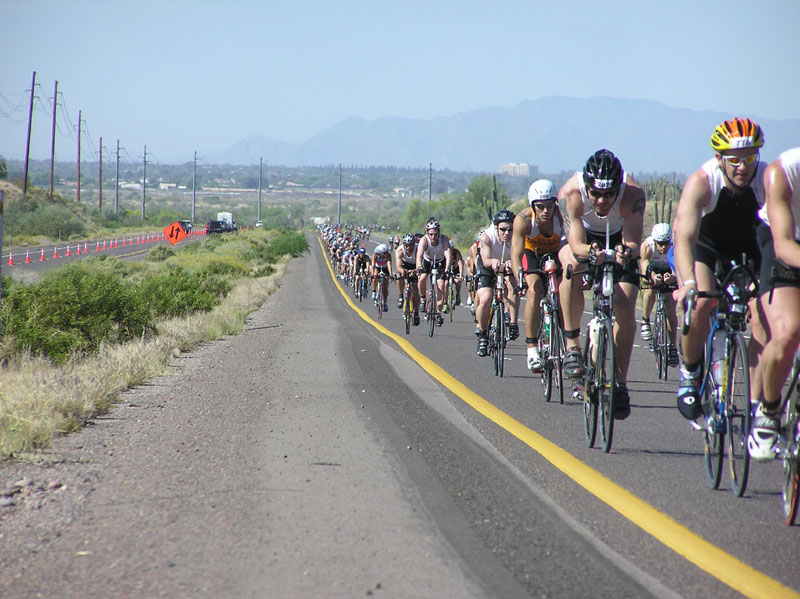 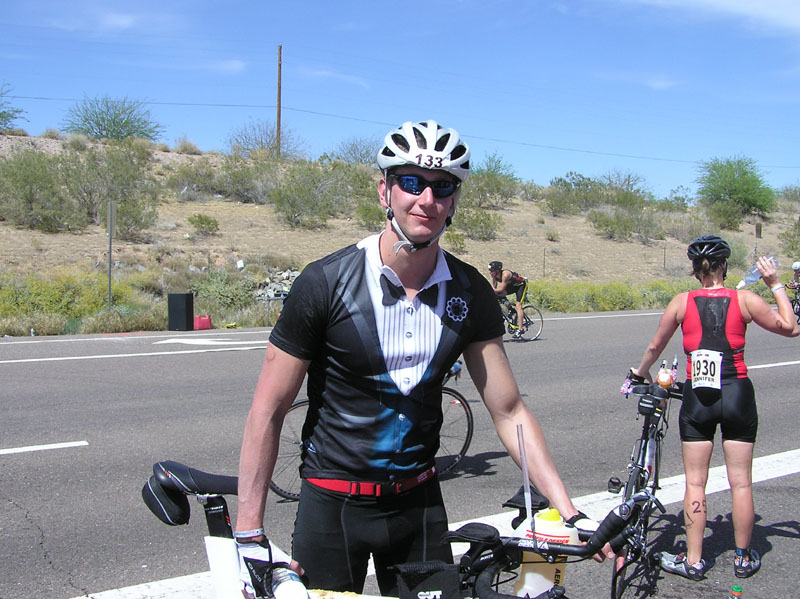 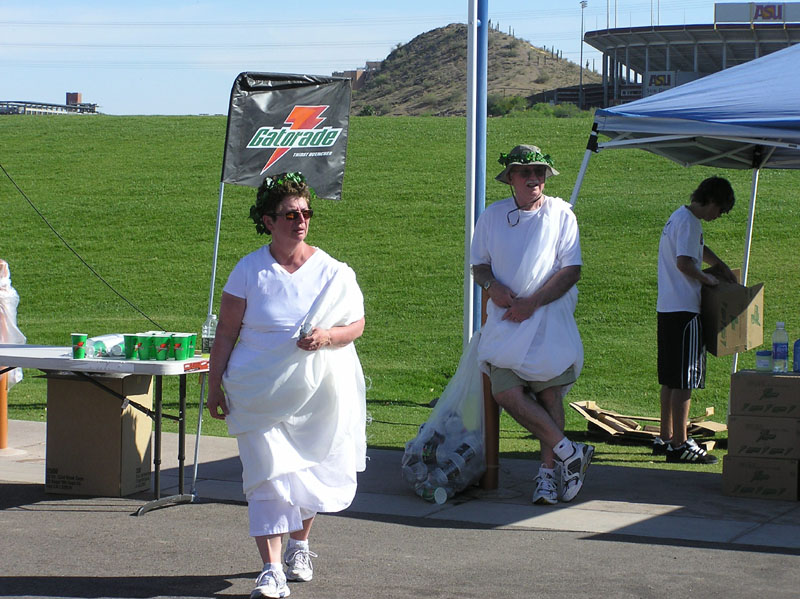 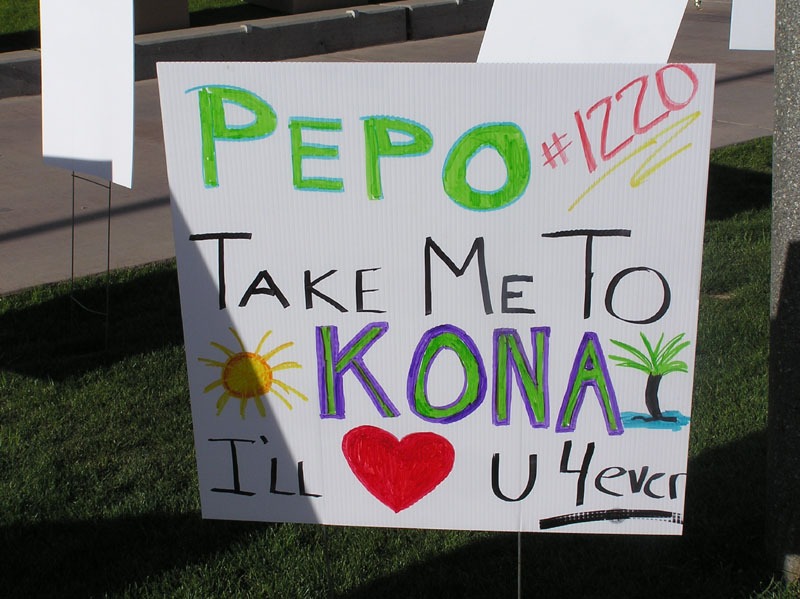 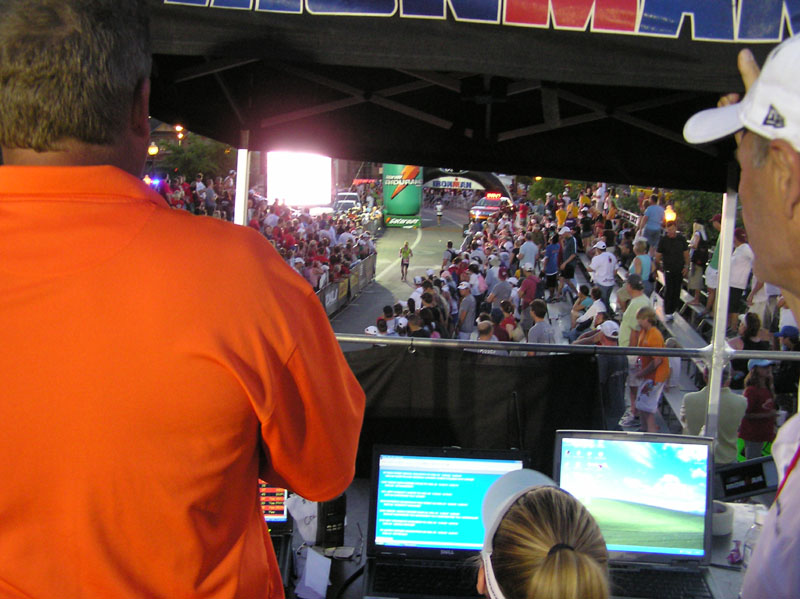