Which Lie Did I Tell: More Adventures in the Screen Trade

In his previous book about Hollywood, Adventures in the Screen Trade, legendary screenwriter Goldman (Butch Cassidy and the Sundance Kid, All the President's Men, Misery, and on and on) gave us a buoyantly cynical inside look at how things really work in the film industry, from a writer's perspective. In a breezy style reminiscent of Tom Wolfe's (The Right Stuff) before he turned to fiction, Goldman generally avoided standard dish and instead tried to get us to understand the sorts of things that go on, albeit using terrifically entertaining stories to illustrate his points. He's the one who put forth the seemingly innocuous but remarkably penetrating maxim about filmmaking -- "Nobody knows anything" -- and then proceeded to prove the thesis beyond a reasonable doubt.

Now, with the benefit of nearly two additional decades of experience, he revisits the scorched landscape he so deftly set fire to with the first book, and makes sure every square inch stays perfectly charred. This time, he concentrates more on the art and science of writing a screenplay, even going so far as to present a new one in its entirety, one which he invited half a dozen noted writers to critique mercilessly, which they did, said critiques he then gives us verbatim in all their unsullied mercilessness.

I'm going to stop now -- I promised myself I would before I ended up writing a book-length review because there is so much to say. Let's leave it at this: Having flirted (only briefly but riotously) with the film business myself, I don't agree with all of his observations, but every one of them is reasonable and supremely entertaining. If you enjoy films and toweringly clever and acerbic writing, you will love this book. 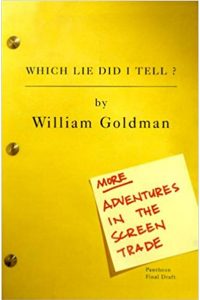