The very best artistic endeavors are those that change your view of the world by showing you things in a way you might not have previously considered. These re-considerations might be general and global in nature, such as never again writing off the physically repulsive after seeing The Elephant Man, or more specific and local, such as re-thinking the entire U.S. space program after reading/seeing The Right Stuff.

George Butler's Pumping Iron is of the latter ilk. It deals with the world of professional body-building, an enclosed cultural sphere that, at least until Arnold exploded onto the scene, tended to evoke groans of revulsion and knee-jerk exclamations of disgust among the uninitiated ("Oh, God, I’d never want a body like that!" as though the exclaimer had some kind of choice in the matter). I confess to a similar reaction, pre-1977. That was the year I saw Pumping Iron, a completely mesmerizing, totally fascinating peek into the lives and work of these amazing behemoths, at a screening in New York that included some live posing by Franco Columbu, one of the legends of the sport.

I remember clearly the experience of watching this film, which I think pretty much mirrored the rest of the audience. It started out with my feeling very much as I did the first (and only) time I’d seen a carnival freak show, which was a lot like staring at an auto wreck. But as the scenes unfolded, we found ourselves drawn into the whole Gestalt of that environment, to the point where we began discussing among ourselves in earnest whispers whether Mike Katz had enough definition in his lats and if Lou Ferrigno’s triceps were sufficiently balanced. In 85 minutes our entire conception of body-building was transformed. I even went to several competitions and was quite proud to find myself correctly predicting the winners with reasonable accuracy.

Of course, it’s Arnold’s movie, all the way, and we’re on his side as he prepares for his fifth Mr. Olympia title. His presence is extraordinary, his charm irresistible, his intelligence undeniable. The mind games he plays against the dull-witted Ferrigno and his protective father are hilarious, despite the real effect they obviously have on the hapless victims.

Ironically, I lost interest in bodybuilding a few years ago when the sport’s practitioners crossed the line of physical achievement I personally considered reasonable, layering on masses of muscle so seemingly indiscriminate as to render antiquated whatever idealized picture of perfection they’d started with. Maybe I need an update of Pumping Iron to help me understand this new level better. 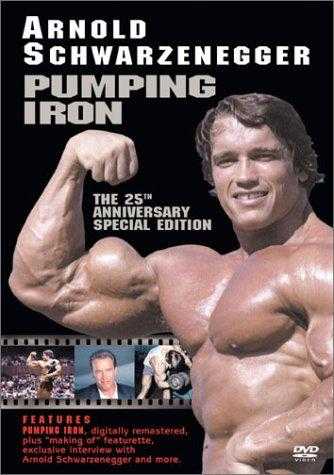